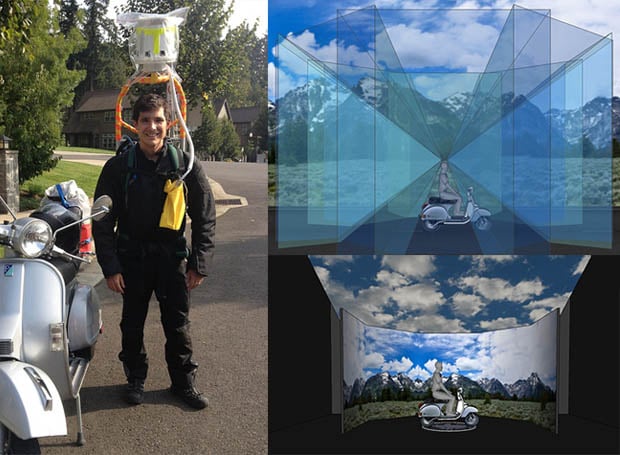 Gabriel Paez is like a one-man Google Street View. On September 21, 2012, the panoramic videographer and iPhone hacker set out from Seaside, Oregon on a journey across the United States to Portland, Maine. Carrying him from place to place was Pucho, his 2005 Vespa PX150 scooter. Strapped to his back was a giant panoramic camera rig designed to capture 360-degree video footage of his adventure “for a live stage show” he’s working on.


The rig is pretty interesting setup. Paez gathered together 9 separate iPhones. 8 of the phones were used to build the camera itself, with each one mounted to the special container and pointed in each direction. The 9th “master” phone was strapped to Paez’s wrist, allowing him to control the entire panoramic camera with the help of special software he wrote to tie everything together.

According to the “where is pucho” section of his website, the duo has arrived safely in Portland. It’ll be interesting to see what the fruit of his labor ends up looking like, but there’s no word on if or when we might be able to take a peek. We’ll update this post if we hear more about it.

my friend pucho (via MAKE)