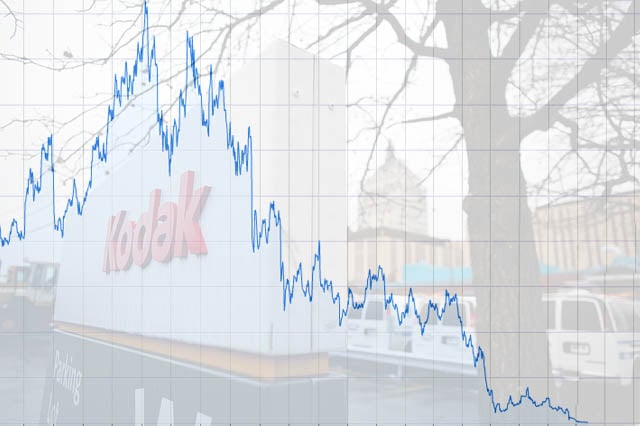 Bankruptcy has not been friendly to Kodak. The once-important camera company — now a printing company — is worth less than 20 cents a share today, a completely different picture than its glory days in the mid-1990s, when the price briefly surged beyond $90. Now that the share price is so low, would it be wise to invest in the company in hopes that it emerges from bankruptcy protection? Matt Krantz over at USA Today says no, and writes,

Some investors figure that companies that were as large and powerful as Eastman Kodak can’t just vanish. And because of that, they think that when they see the shares trading for just 22 cents that they can’t miss. But investors who assume this are missing a few key points that wind up resulting in huge losses and disappointment.

When companies undergo bankruptcy restructuring, common stockholders are last in line for what’s left of the remaining company. It’s pretty common for the common shares to be delisted from a stock exchange and ultimately be moved to a lightly regulated marketplace. That’s what’s happened with Kodak shares. Some shareholders find getting out of these positions can be costly or troublesome.

He says that while it’s possible that Kodak will succeed in its plans of emerging from bankruptcy next year, it’s unlikely that anyone still holding on to shares in the company will see their wallets getting fatter.

Image credit: Illustration based on Kodak Building in Rochester, NY by Viktor Nagornyy