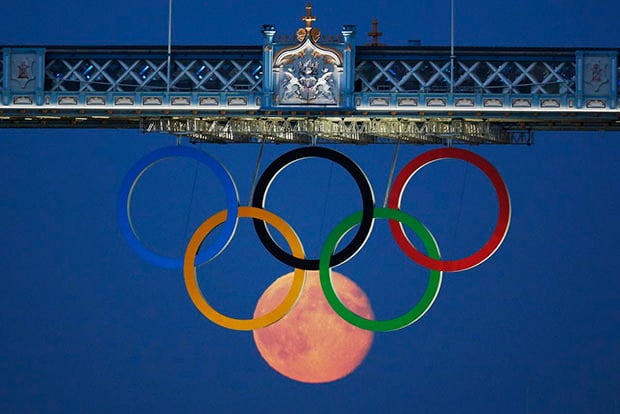 Reuters photographer Luke MacGregor doesn’t know much about astronomy, but he had the idea recently of photographing the full moon rising up into the Olympic Rings found on London’s Tower Bridge. Armed with a phone app that informed him of moonrise times, he spent two evenings trying and failing to create the photo. Finally, on the third evening, he succeeded:

I readied myself at the predicted angle to the rings. The moon would be rising at 8:50pm and would hit the rings by about 9pm. As the moon had been rising later each evening it had become darker than the previous evenings. I wished I had my tripod. Nonetheless, using the Canon 5D MkIII meant I could push the ISO a little further than I would normally have chosen for a late evening shot. Exactly on time the moon began to show itself over the horizon, a lovely peachy color. I had to keep an eye on a changing exposure, balancing the brightness of the moon with a rapidly darkening sky. As it rose I had to keep moving along, mercilessly pushing tourists out of the way who had stopped to look, in order to keep the moon in line with the rings. Finally, after three days, I had the picture I had been trying to achieve.

The moon doesn’t look like it moves very quickly when you’re looking up at it in the night sky, but everything changes when you try to photograph it with a telephoto lens (MacGregor was using a 400mm).

Here’s a video showing how quickly the moon travels in your frame when you use a telephoto lens and tripod. It shows a series of 20 photos that are each 20 seconds apart:

It’s the same with sunsets. If the sun is already close to the horizon line, it’s pretty surprising how little time you have to photograph it before it disappears out of view.

Attempting to shoot the moon [Reuters]