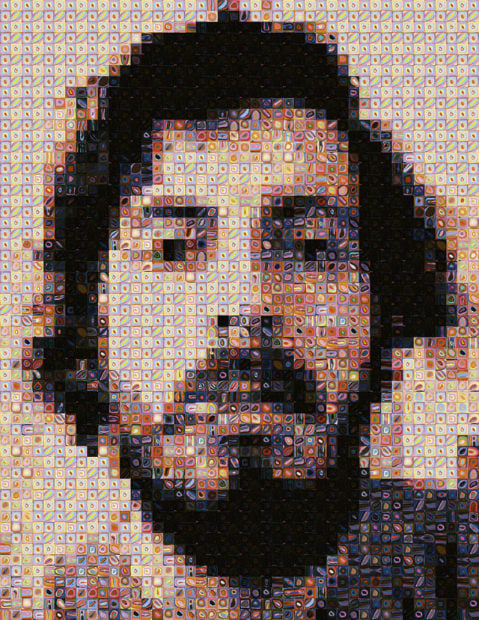 Young artist Scott Blake‘s article about his altercation with photographer and painter Chuck Close starts with a simple question: “When one of the world’s richest living artists orders you to stop making art, you do it. Or do you?” It’s been two years since Close, who is referred to in the article as “the wealthy bully,” put a stop to Blake’s Chuck Close Photoshop plug-in by threatening a lawsuit, and Blake still hasn’t managed to put what he sees as the injustice of the whole situation behind him. Hence, his article.

The article, which originally appeared in Hyperallergic, is tantamount to an open letter to Close himself. In it Blake discusses how he believes his plug-in (which imitated Close’s hand-made photo mosaic style) falls under fair use, but that he doesn’t have the resources to defend his case in court against one of the richest artists on the planet.

I never intended to rip off Chuck Close, so when he emailed me in November 2010 threatening legal action, I did exactly what he said and took my filter offline immediately. Still, I feel obligated to point out that Close is the 14th richest living artist, worth a staggering $25 million. I really don’t think any work I make is going to “jeopardize” his career or his livelihood.

In truth, the first email he received from Close was in all caps, threatening lawsuit and stating in no uncertain terms that he did not want to be associated with this project. Blake, horrified to have received such an upsetting e-mail from one of his icons, replied.

I have attempted to get in touch with you. I think your art is great. I drove 10 hours to see your exhibit at the Seattle Art Museum in 1998 and was blown away. I wish we had met under better circumstances. I understand you do not want me to continue my Free Chuck Close Filter, but I would like the opportunity to talk with you before you take any legal action. I believe my website is not copying your art, but rather is a logical extension of the creative process. Please consider talking with me before you make legal decision, from one artist to another.

Even if your motives are not bad, I still do not want my work trivialized. I must fight you because if I know of your project, and do nothing to exercise my legal rights, that will put me in a position where I can’t fight the next, even more egregious usage of my copyrighted image and use of my name. It may be an amusing project and many people might like it, but it is MY art that is trivialized, MY career you are jeopardizing, MY legacy, which I have to think about for my children, and MY livelihood. I must fight to protect it. I hope you will realize the harm you are doing me and my work that you claim you admire and voluntarily shut down the site so as to avoid a law-suit.

The full article is certainly worth reading, and includes the entire conversation between Blake and Close, ending with Close’s good natured invite that Blake might come by his studio and “say hello.” Blake never made that trip, but to this day still claims fair use and plans to somehow release his filter 100 years after Close has died and no further legal dispute might arise.

Obviously Blake believes he is in the right and that Close needs to be willing to “pass the torch to the next generation.” The conclusions one draws from the interchange and the article, however, are entirely subjective. Is this really the wealthy bully vs the fledgeling artist? Or is Blake’s work less “appropriation” and more copyright infringement? Check out the full article and give us your take on the whole situation in the comments below.