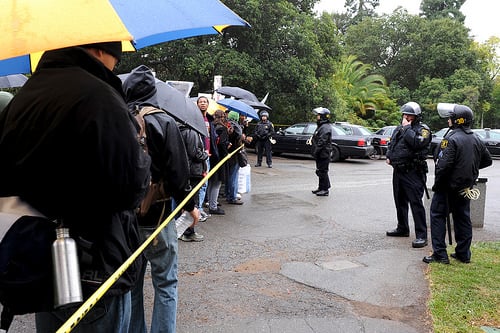 The University of California has agreed to dish out a $162,500 settlement to David Morse, a 43-year-old photographer who was arrested back in 2009 while covering a student protest. The SF Chronicle writes,

[The suit] an officer told Morse, “We want your camera. We believe your camera contains evidence of a crime.”

The officers ignored his press pass and arrested him and seven others on suspicion of rioting, threatening an education official, attempted burglary, attempted arson of an occupied building, vandalism, and assault with a deadly weapon on a police officer, the suit said.

But police obtained a search warrant and used several of his photos in brochures and online in hopes that the public could identify individuals.

As part of the settlement, the police department has also agreed to modify its procedures regarding seeking materials from journalists and will be conducting training sessions teaching its officers about media rights.