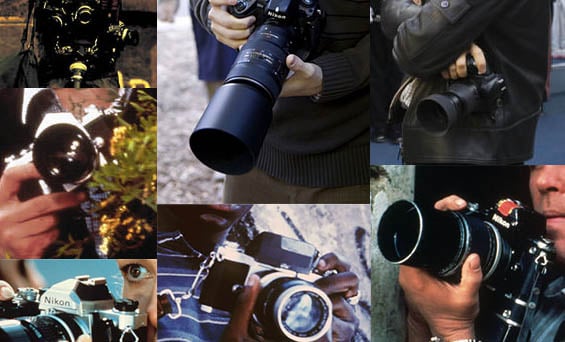 Here’s a top ten list, in no particular order, of Nikon movie roles! Often appearing as uncredited extras, these Nikon SLRs have been present at some of the greatest moments in movie history.

After The Godfather Part II, this looked like it would be director Francis Ford Coppola’s $30 million folly. Instead, it’s a masterpiece. Joseph Conrad’s Heart of Darkness transposed to the Cambodian jungle, with Martin Sheen as the traumatised Willard and Brando as the deranged Kurtz, it’s a post-colonial nightmare of 20th-century proportions.

The photographer: Quoting TS Eliot and wearing – count them – four Nikon Fs around his neck, Dennis Hopper’s unnamed photojournalist is Kurtz’s resident ‘mutt’. The Nikon F was the camera of choice for professional photographers in the 1960s and early ’70s, but it’s quite possible the insane Hopper isn’t carrying any film in his. The character is actually based on what might have happened in real-life to Sean Flynn (son of Errol), the daredevil actor and photographer who was kidnapped by Vietnamese communists in 1970, never to be seen again.

Most famous for: Marlon Brando’s terrifying monologue: “Horror and moral terror are your friends…”

Worth watching? Don’t tell anyone you haven’t seen it – they’ll be jealous of the treat you have in store! 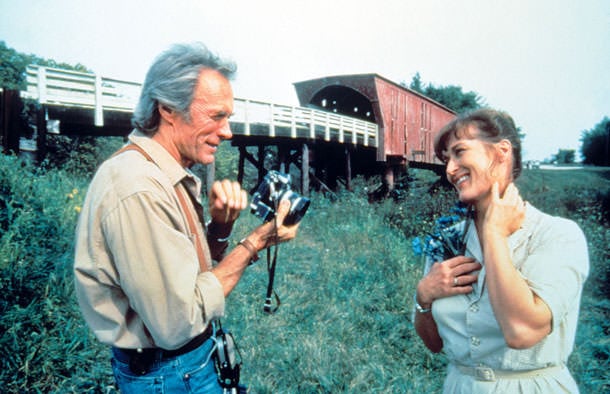 In 1965, the husband and children of housewife Francesca Johnson (Meryl Streep) leave their home in Madison County to go to the Illinois State Fair. While they’re away, a National Geographic photographer called Robert Kincaid (played by Clint Eastwood) arrives. He’s been commissioned to photograph the eponymous bridges in Madison, and changes everything.

The photographer: Eastwood wields a Nikon F with an S36 drive in the movie – intriguingly, though, the latter doesn’t stop him advancing the film manually on a few occasions. There’s a bit of early fumbling with a tripod that suggests he isn’t a man who’s made a career out of taking photos, but otherwise Eastwood’s technique is sound.

Most famous for: This is one of the few movie adaptations to improve on the book it’s based on – in this case, Robert James Waller’s novel.

Worth watching? Yes! It’s one for the true romantics. 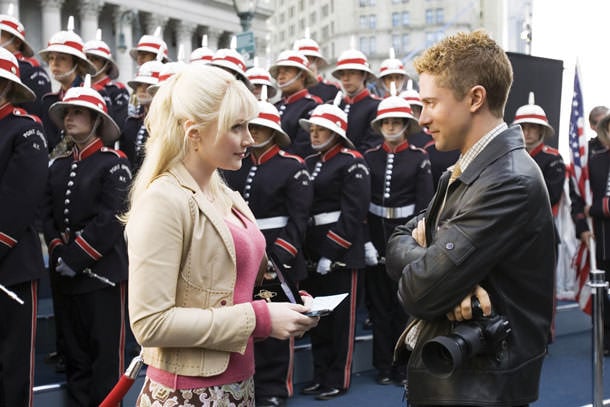 This is generally thought of as the least good of Sam Raimi’s three Spider-Man films, but it’s also the most eccentrically ‘Raimi’ of the trilogy. It’s the story of Peter Parker vs hubris. Provoked by the alien Venom and inspired by victories over Sandman and New Goblin, our friendly arachnid turns to the dark side…

The photographer: A budding photographer on The Daily Bugle, Peter Parker (Tobey Maguire) sports a Canon F-1n for most of the trilogy, but in Spider-Man 3 he comes up against arch-rival Eddie Brock, Jr. (Topher Grace), who fakes a snap of Spidey using a Nikon D50, only to be transformed by a malevolent alien parasite. Although digital, the D50 really does make the mechanical sound you hear in the movie. It’s the reflex mirror moving into place, not a blooper as some viewers think.

Worth watching? Only if you’re a disciple of Marvel Comics. 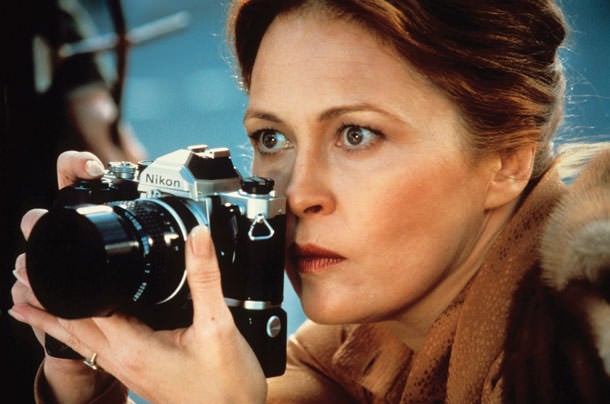 The photographer: Mars favours a Nikon FM, one of the better SLRs of the 1970s, with an MD-11 motor drive. This is fairly accurate, although the FM was more often used as a backup camera for professional photographers. While shooting the film, Dunaway was dating showbiz photographer Terry O’Neill. Presumably, she owes her convincing way with a camera to her then-boyfriend’s influence.

Most famous for: This was the first major studio outing for screenwriter John Carpenter, who went on to direct Halloween.

Worth watching? For less-than-subtle mystery/horror, absolutely. 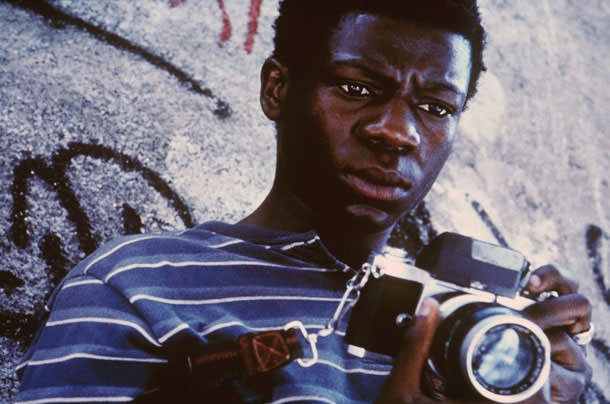 The unsavoury underworld of Rio de Janeiro never looked so vibrant – or dangerous – as it does in this frenetic saga. The film follows a group of malcontents through decades of ultra-violence and war, as the streets are consumed by blood, bullets and testosterone.

The photographer: Rocket (Luis Otávio, and later Alexandre Rodrigues) pines for a life as a photographer but is dragged into Rio’s gang wars. Ironically, this gives him his big break, as he graduates from photographing druglords to a stint on a local paper. He wields a Kodak Instamatic and Retina Reflex III, but finishes up with Nikon’s first SLR, the Nikon F, and a dream job.

Most famous for: Its astonishing amateur cast – most were from the Rio favelas, a few from the notorious Cidade de Deus itself.

Worth watching? Yes, although be prepared for a bloody action film first and a high-minded analysis of gang culture second. 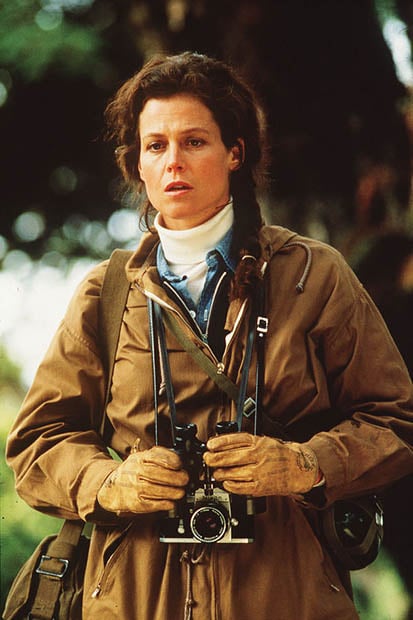 Real-life zoologist Dian Fossey spent 18 years living with the endangered gorillas of Virunga National Park, the Congo. She eventually became a one-woman defence force against the local poachers. Although she was murdered in 1985 (with many believing poachers to be responsible), her conservation efforts became famous around the world. The biopic was inevitable, and we’re lucky director Michael Apted did such a sensitive job.

The photographer: Fossey is played winningly by Sigourney Weaver, although reports claim that the conservationist was far more enigmatic and eccentric in real life. Although a National Geographic photo journalist, Fossey’s lover Bob Campbell (played by Bryan Brown) spends a lot of time shooting a film we never get to see. Fossey is the one taking stills very convincingly with her trusty Nikon F.

Most famous for: The stunning footage of mountain gorillas, seamlessly integrated with shots of actors hulking around in animal suits. You wouldn’t guess it wasn’t all the real thing.

Worth watching? 50/50. Not a classic by any means, but it’s still a great-looking film. 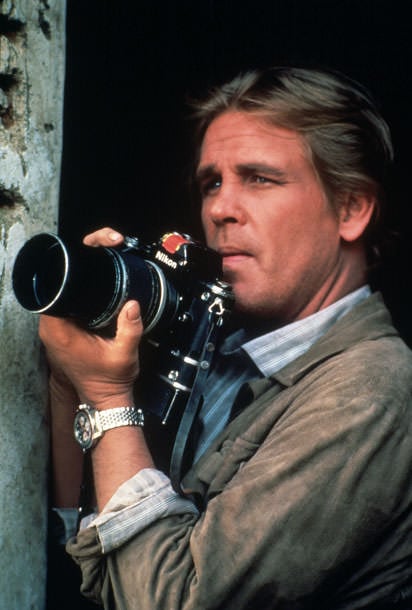 This gripping movie, directed by Roger Spottiswoode, follows three journalists as they report on the last days of a civil war in Nicaragua – and fall in and out of love with each other. Photographer Russell Price (played by Nick Nolte) gets his lens dirty when he agrees to photograph a dead rebel leader to convince people that the man is still alive. He ends up producing an unforgettable image, in a similar vein to Alberto Korda’s famous shot of Che Guevara.

The photographer: Handling a Nikon F2 like a pro is tougher than it looks, but Nick Nolte gets it exactly right, even showing us a bit of manual rewinding at times. Maybe this is thanks to the influence of the film’s advisor Matthew Naythons, who’d worked as a photojournalist in wartorn Nicaragua. Just ignore the extra on the hotel roof – he’s not so handy with his video camera!

Most famous for: This is a Hollywood movie about a real-life civil war, and unambiguously takes the side of the Sandinistas, against Somoza’s dictatorship.

Worth watching? You could teach a course on old-school SLR photography using a DVD of Under Fire. 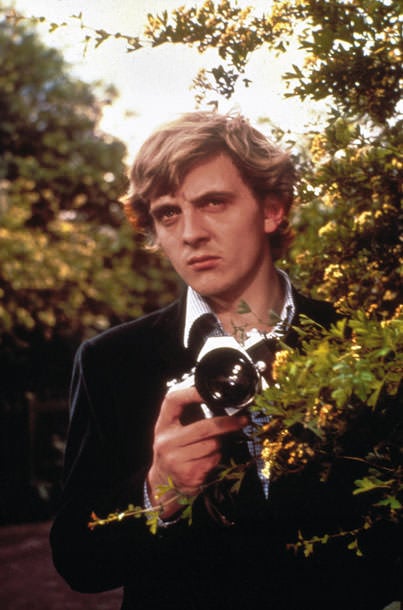 This classic Sixties film is almost-but-not-quite based on a ‘day in the life’ of iconic fashion and all-around famous photographer David Bailey. Michelangelo Antonioni’s most famous cinema outing sees mod photographer Thomas (David Hemmings) take some photos of two lovers in a park. He then ‘blows up’ his black-and-white images, only to find what he thinks is evidence of a murder. Returning to the park, he does discover a body, but after a night of partying he goes back in the morning to find that the corpse has disappeared. He then drifts back into the hazy world of the swinging Sixties, unable to understand what’s happened.

The photographer: Oh dear. It obviously didn’t occur to anyone on set to give Hemmings a tutorial on how to handle an SLR. He’s all over the place in terms of technique– his left hand, in particular, almost never supports the camera as you’d expect it to. Nevertheless, the film turned the Nikon F from useful tool to iconic accessory overnight.

Most famous for: Its depiction of London life in the Sixties, from music to fashion.

Worth watching? Hemmings makes a hash of it, but this is still the most celebrated ‘Nikon movie’ ever made. 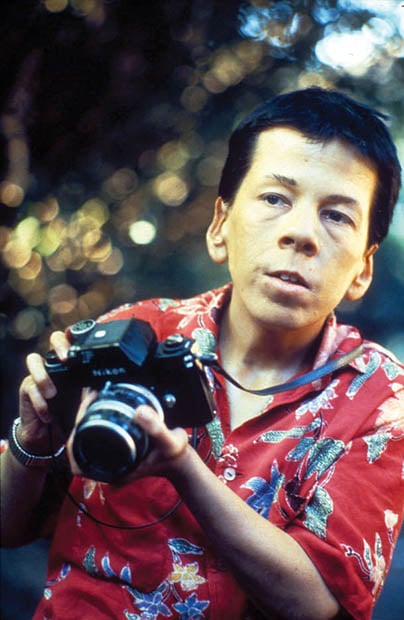 The book engages with the politics of Indonesia more directly, but in Peter Weir’s film, the 1965 overthrow of President Sukarno is just a backdrop to the intertwining psychodramas of an Australian journalist (Mel Gibson), a British diplomat (Sigourney Weaver) and a Chinese-Australian photographer (Linda Hunt). Opportunistic Gibson is looking for the big story, while Hunt is full of moral outrage – and only one of them is doomed.

The photographer: Linda Hunt made history by becoming the first person to win an Oscar for playing a member of the opposite sex – Australian-Chinese dwarf photographer Billy Kwan. Standing at 4’ 9”, Hunt needs to perch on Gibson’s shoulder to get the best shots with her Nikon F. This is the kind of photography advice you can only get at the movies!

Most famous for: At the time, The Year of Living Dangerously was the most expensive Australian film ever made. Meanwhile, Weir and Gibson endured death threats from Filipino Muslims.

Worth watching? As a history lesson, as you might expect, it’s totally pants. However, it’s still worth a look, simply for the intensity of Peter Weir’s vision. 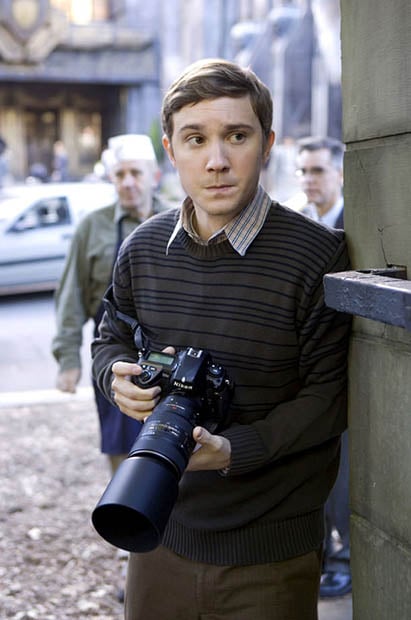 Superman Returns is, oddly enough, a belated sequel to the Christopher Reeve-starring Superman 2 (1980) that entirely ignores the events of Supermans III and IV. Why? No one really knows. Brandon Routh makes a stunning debut as the Man of Steel, foiling a disappointingly mundane Lex Luthor (Kevin Spacey) scheme to generate Kryptonian real estate in the North Atlantic. Of course, he falls back in love with the Earth while he’s at it. And Lois Lane (a fine Kate Bosworth).

The photographer: Sam Huntington plays Daily Planet photographer Jimmy Olsen. Sadly for Jimmy’s career, his 80-400 VR lens doesn’t quite manage to capture Superman at top speed. Sadly for Nikon fans, no one on set saw fit to tell poor Huntington how to hold his instrument…

Most famous for: Brandon Routh’s performance is a brilliant homage to Christopher Reeve’s – never descending to the level of imitation.