Since November 2011 I’d been thinking about an astrophotography project: take a photo of the moon each day from full moon to full moon, then combine it into a seamless movie that looks as if someone had moved the sun around the moon for one minute. I found similar videos, but most were simulations done in software, or photographic ones that weren’t very smooth. Seemed simple enough, mostly because I didn’t see the complications that would come along with this project caused by… physics.

My plan involved setting the same exposure each night starting with the full moon, and let the moon’s dark side gradually move across its face while the lit side stayed about the same brightness. Adjust the photos’ angles to match each other, throw all of them into Final Cut Pro X and add cross dissolve transitions between them, and I’d get a smooth movie showing every phase of the moon. 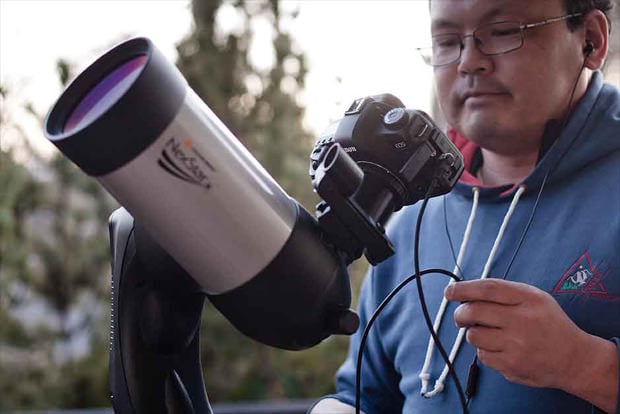 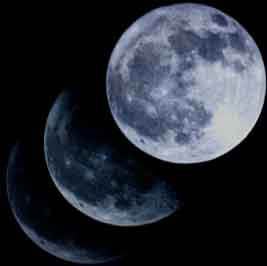 The first complication involved the exposure. The brightness of the lit side of the moon varies radically as the relative position of the sun changes. The ISO 800, 1/250s exposure of the full moon (you have no aperture control with the telescope) quickly became inadequate as darkness spread across the moon’s face — even the lit part of the moon became much darker than it had been with the full moon. My theory here is that I see far more shadows than I can resolve as the sun moves to an oblique angle to me, so the apparent brightness falls dramatically. To compensate, I had to increase the exposure as the moon waned and decrease it as it waxed. Near the new moon, my exposure had increased to ISO 2500 at 1/80s — dangerously close to causing motion blur.

I told my friend Jack Andrys about this plan last November, and he brought up the issue of the moon’s apparent size changing as it moved around its elliptical orbit.

“Sure, but the effect isn’t very big,” I replied. Foolishly.

The effect is quite big actually, so I’d either have to compensate for the changing size of the moon, or figure out some way to smooth it out.

I’d known since I was a kid that the moon appears to wobble as it orbits the earth — a phenomenon known as “libration.” It’s not actually wobbling; the moon moves around the Earth in an elliptical orbit, so we see a little more of its left side at one part of its orbit, and a little more of its right at another. The plane of the moon’s orbit isn’t exactly the same as the plane of the Earth’s equator either, so we can see the moon’s north pole sometimes, and sometimes its south pole.

What didn’t I know until now? The effect of libration is huge. One day to the next I can see just by looking at my photos that the moon has tilted and rotated a lot. My plan of simply cross dissolving between moon photos was itself dissolving; the effect wouldn’t look very impressive if you can see craters shifting their positions between frames.

Making a movie of a moon tilting and rotating and growing and shrinking wasn’t going to be quite so easy. But I’m a technophile; I should be able to figure out a solution with my computer and a set of tools. And a solution I did find. 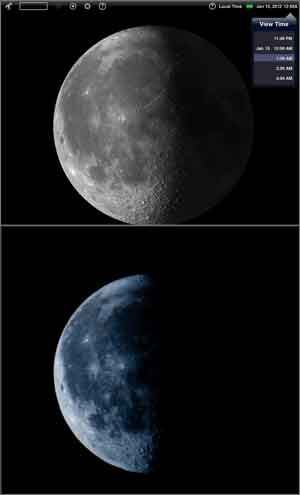 The first step was to make the photos’ exposures match what I thought it’d be naturally. I did this by using Lightroom’s eyedropper tool to sample corresponding bright areas of each of the photos, and adjusting the brightness and exposure until they all came fairly close. I did compensate for the darkening of the lit part of the moon in camera, but that’s only an approximation; just to get good image data to work with. The fine tuning had to happen in Lightroom.

With the moon changing its orientation each night, and with each photo showing the moon at a different angle because I took them in different positions in the sky on different nights, realistically reproducing the moon’s libration and apparent size changes seemed difficult at best.

A fairly quick Google search brought me an iPad app called Moon Globe that accurately shows the moon’s phase and orientation at any time of any day going far into the past and future. I took screen shots of this app for each night I took a moon photo at the time of day I took each photo, then brought each of those screen shots and each of the corresponding shots of the moon and aligned them using Photoshop layers. The figure at the right shows Moon Globe’s display on top and my corresponding photo below. The phase looks different because I increased the contrast of my photo in Lightroom.

I then had 21 shots of the moon with matching exposures and proper sizes and orientation. Now, how to get a seamless animation with all this?

Morphing software occurred to me. People typically use this kind of software for fun, to make movies of one of their friends or family members gradually morphing into someone else. It made sense to me that I could morph each moon shot to smoothly transition between two frames of the moon with different phases and orientations.

I don’t plan on ever morphing images again so I had to find a free one that seemed to have good quality, and I found one called Sqirlz Morph for Windows only. I use a Mac exclusively, but I also have Parallels and Windows XP, so this isn’t a problem. 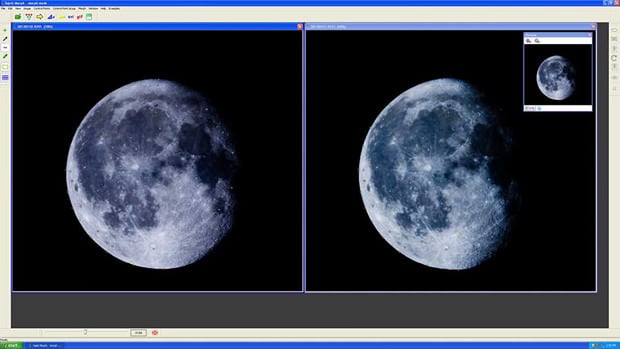 For each of the 21 pairs of photos, I placed control points at corresponding major features of the moon, typically the edges of craters or small spots in the maria (“seas”). Then I have Sqirlz Morph generate an AVI that animates between the two photos of each pair. I convert each AVI to a QuickTime MOV file, import each into Final Cut Pro X, placed them in sequence in the timeline, and I had a nearly seamless animation from new moon to new moon. Small errors in various parts of this process mean you can see small glitches in the animation.

I hope you enjoy the video!

About the author: Forrest Tanaka is a NorCal-based web developer, designer, and photographer serving small and medium businesses. Visit his website here. This post was originally published here.