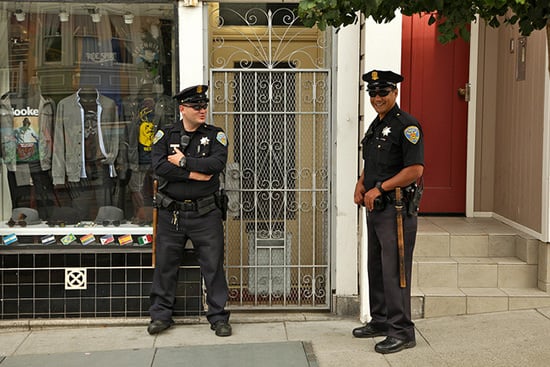 David Hobby has written up a great post over at Strobist on how he avoids shoot-ruining confrontations with police officers when shooting in public locations (we shared an example of a confrontation yesterday). His tricks include calling the police ahead of time and leaving notes on the doors of houses nearby:

Before I shoot (a couple hours, usually) I call into the duty officer of the local precinct. I tell them my name, that I am a photographer, and where/when I will be shooting. I explain that, just in case some overenthusiastic passerby calls me in as a suspicious person, I just want to save them a call. I offer them my cell number, and ask if they want my sosh or driver’s license number. I have never been taken up on this, but I would happily give it.

[…] I print up a sheet and stick it in everyone’s door who is within eyeshot of the shoot at night. Because believe-you-me, it you are popping flashes in the woods at 2am, some idiot will absolutely call your butt in. To them, it’s gotta look pretty much like Close Encounters of the Third Kind.

Some of you might not like these tips because they appear to be the equivalent of putting up a white flag in the fight for photographers’ rights, but they may come in handy if one day you have a critical photo shoot that you can’t afford to have interrupted.