Update: Erin from Reuters contacted us informing us that this is in fact a genuine, non-manipulated photograph. Here’s a good explanation of why it’s real. 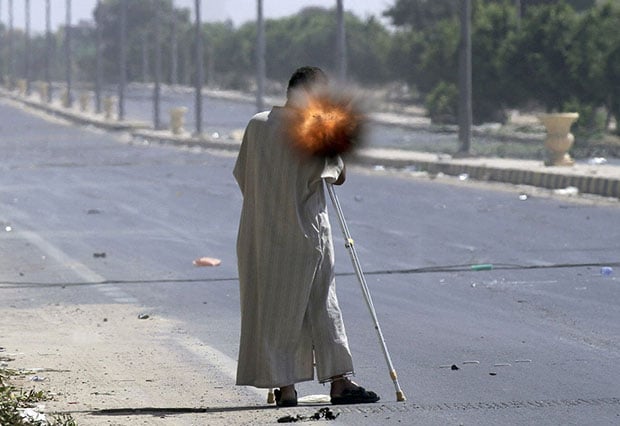 Reuters published the above image as an Editor’s Choice photo yesterday, and almost immediately readers began leaving comments questioning whether the photograph was Photoshopped. The debate soon spread to other websites, including Reddit, and it appears that the photographs has since been taken down (though it can still be seen in its original slideshow from last week).


Here are a couple of the comments arguing for why the image is fake:

You would […] see the launcher in the shadow- an RPG & its launching tube are over a meter long. You would also see the shadow of the smoke and exhaust that we can see. Uneven ground can play tricks on shadows, but this looks like flat ground.

I’m a vfx guy on movies and this would never pass muster The fire would be brighter than the sun on his shirt and there would be no shadow side. There would be a hot core that would get cooler at the edges. Sorry. photoshop fail.

…and a couple counterarguments:

This photo appears surreal and unique, but factually, if this exhaust is just exiting the rear of the launcher, it will not glow as you say, particularly if just ignited. There would not be a brilliant hot core necessarily if smoke were the first thing exiting; you’d have exactly what you see here, a turbulent muck. Just a few moments later, you’d see as you expect perhaps. But brighter than the sun? Not necessarily. There would not be any lighting on his shirt until the middle of the fire exited -beyond- the darker smoke. And to those saying the photographer had to be a certain distance back, well there’s always the possibility it was learning on the job day. ; ) I could do a vector analysis on the shadow, but don’t have the time right now. I am sure the photographer had a lot better things to do that day than think ,” hey, let’s take a photo of a guy using a cell phone and pass it off as an RPG launcher, that’ll sell papers”.

This photo could very well be real. The lens is focused to the distance of the rebel on crutches. The area around him is the most pristine, clear, detailed part of the image. The background is blurred because of the aperture, iris, f-stop, shutter settings, lens, etc, etc. Based on this, one can logically state that the explosion, which is at approximately the same distance from the camera as the rebel is, would be in clear focus. The very fast shutter speed explains why the blast looks “fake” (as we are not accustomed to seeing images taken like this). The small aperture and fast shutter speed also explain away why the blast is not blindingly-bright (as there is less light allowed onto the image plane/sensor, the explosion is not over-exposed). Also, the shadow is so obscured and visible at such an awkward and twisted angle, that you can barely judge the proportions of the man based on the shadow cast, let alone the existence of the weapon.

If you want to examine the published photo yourself, here’s a direct link.