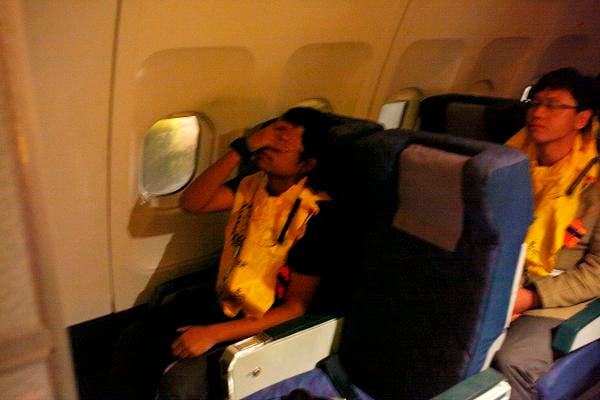 Reuters photographer Beawiharta was on a short flight from Singapore to Jakarta with his wife and three kids, when one of the engines suddenly exploded into flames. As a sharp burning odor permeated the cabin, the plane began to vibrate harder and harder, and finally the electricity turned off. Accepting the fact that if they died their family would die together, Beawiharta grabbed his DSLR and started photographing:

After that, I became calm because I was not afraid to die because we would all die together. I started to adjust my camera, which was hanging around my neck. I set the ISO higher, set the white balance, checked the battery was full and saw I had around 300 clicks for the rest of the memory card. I started to take pictures, though it was dark. I forgot my Canon EOS5dmk2 has a full HD video, so I forgot to record the situation. After 20 years living as a photographer, I was thinking as a photographer. [#]

Check out some more photos and his story over on the Reuters blog.

Trading fear for photos on a stricken plane (via Gizmodo)

Image credit: Photograph by Beawiharta/Reuters and used with permission