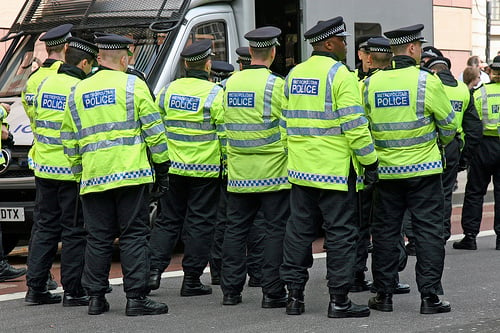 64-year-old photographer David Hoffman has been awarded £30,000 and given an apology by the Metropolitan police after having five of his teeth knocked out when a policeman in riot gear charged Hoffman and hit him with a riot shield. The MPS released a statement staying,

On 1 April 2009 well-respected social issues photographer David Hoffman was recording the G20 protests in the City of London.

The Metropolitan Police Service (MPS) recognise that Mr Hoffman was entitled to report on that day but was caused injury by an MPS officer during the event, preventing him from doing so.

The MPS confirms its recognition that freedom of the press is a cornerstone of democracy and that journalists have a right to report freely. The MPS apologise to Mr Hoffman for the treatment he received and have paid compensation.

It was at the same protests that newspaper vendor Ian Tomlinson was pushed to the ground and later died of a heart attack.

Image credit: The Met by zoonabar