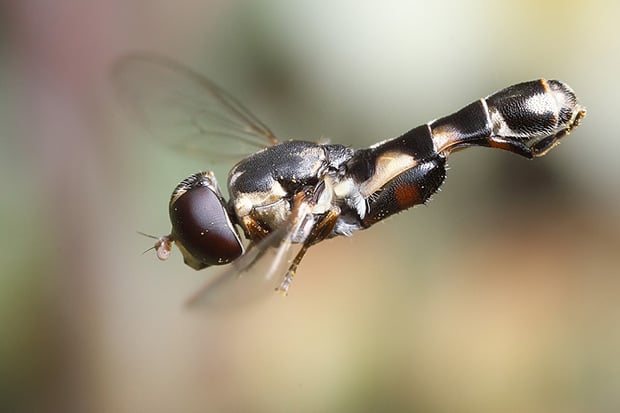 The main thing with in flight hover fly photos is not to try, by that I mean if you go out to take one you will end up normally chasing a hoverfly all over the place with little chance of success. I only take them when an opportunity arises.

In this case the males of this species of hoverfly patrol the flowering bush looking for females . When they spot one they go into a stationary hover for about 10seconds whilst they decide if the female is what they think it is and if it’s a suitable mate.

I was just using a bean pole for support (hold bean pole in left hand along with a bit of camera – normally the lens), Spotted a male hoverfly following a female hoverfly and waited for the female to land. The male went into the expected stationary hover about 5cms above the female, I then just moved in with fixed focus until the the hover came into focus and took about 6 shots in quick succession of which 2 had the focus where I wanted.

The above shot is a crop of this one: 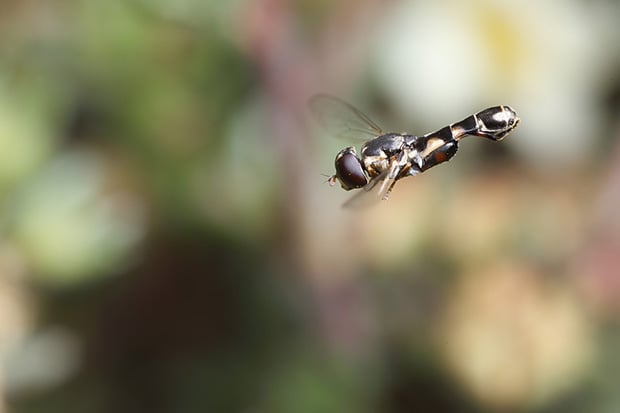 Shot with a Canon 5D Mark II and Canon MP-E 65 Macro lens at around 1:1 with bracket mounted diffused flash FEC set at -0.3. The main point is knowing the habits of the subject.

About the author: Brian Valentine is a UK-based photographer that focuses on macro shots in his garden. You can find him on Flickr as Lord V.