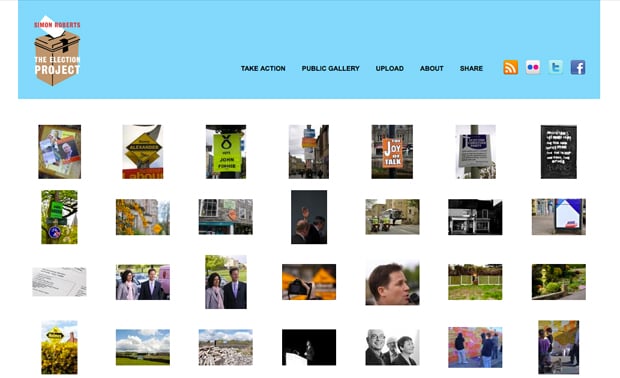 The British government recently commissioned photographer Simon Roberts to create a public photo collaboration called The Election Project. In short, Roberts is creating documentary-style photography that follows the 2010 UK General election, and he is organizing a website to which people all over the UK can submit their own photographs of local political activities.

Roberts will also be traveling the country for three weeks in a motor home to document the election on the local level, with emphasis on the relationship between politicians and voters.

Community involvement is key to the project. Visitors can submit photos and “vote” (add favorites) for photos via the project’s Flickr photostream. Roberts wrote on the project site:

The General Election is, by definition, a democratic process. Your contributions will add a vital collaborative and democratic dimension to the project. This will undoubtedly be the most photographed election in British history.

Many of the posted public photos have a charmingly amateurish quality to them, a rawness that Roberts says he prefers: “The public’s images will also help to provide an antidote to the more stage-managed photographs increasingly seen of the campaign trail,” the photographer wrote.

It’s a fairly interesting glimpse of the elections thus far. You can see the batch in The Election Project’s gallery – which might take a while to load, since all the photos are currently posted on a single page. Pagination, much? Maybe it’s all in the name of equal representation.

Google Shows Off Chrome’s Speed at 2700 Frames per Second