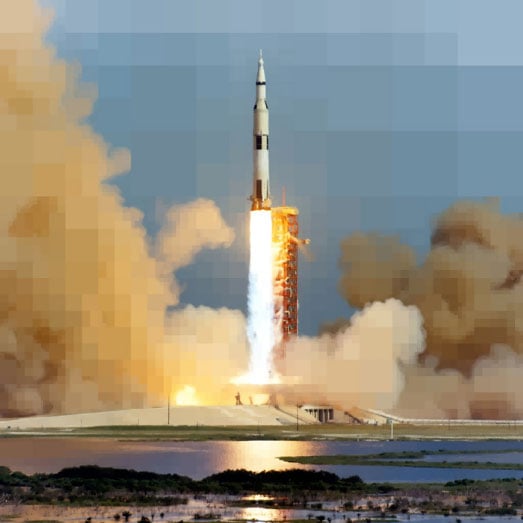 American Pixels is an experiment by Jörg Colberg that uses a special kind of image compression algorithm to create a distinct look. Here’s Colberg’s statement:

These “American Pixels” are an experiment. Image formats like jpeg (or gif) use compression algorithms to save space, while trying to retain a large fraction of the original information. A computer that creates a jpeg does not know anything about the contents of the image: It does what it is told, in a uniform manner across the image.

My idea was to create a variant that followed in the footsteps of what jpegs do, but to have the final result depend on the original image: in a very direct way the computer algorithm becomes part of the image creation. The idea was to build a hierarchical compression algorithm, where the compression – in effect the pixel size – depends on the information in each uncompressed pixel and its neighbours. So adaptive compression (acomp) is a new image algorithm where the focus is not on making its compression efficient but, rather, on making its result interesting.

[…] What is more, it produces images that have spatial depth: as you zoom in you can see more and more details. acomps are designed for a wall: The viewer has to be able to walk back and forth in front of them.

Protect Your Gear by Flying with a Gun