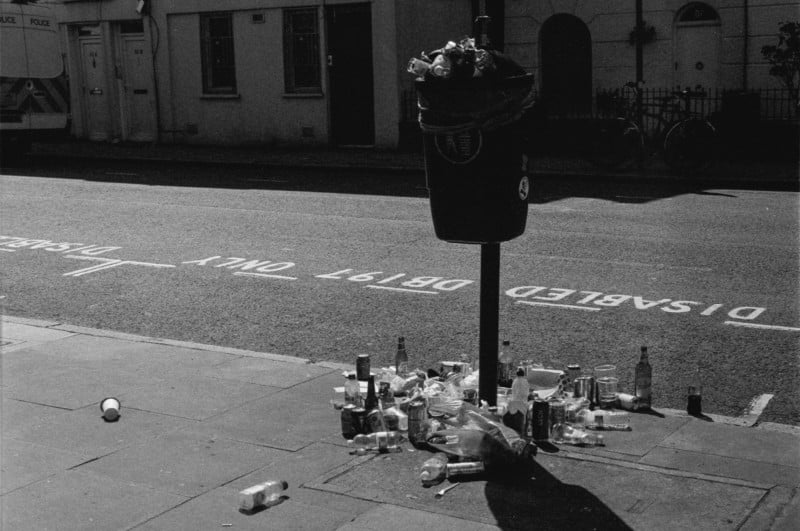 When I work on a blueprint for a potential documentary project most of my attention goes to unpacking whatever it was that drew my initial interest – usually a collection of themes, locations, and characters that I will visit in order to discover what direction the story will end up going in.


As my projects are people-based, the most important things for me to pay attention to are the human moments occurring as part of and to contextualize the main story beats. Emotion, gesture, behavior, interaction, action, and combinations of these will make up the soul of a story.

I’ll research communities I want to spend time with, people I want to talk to, and customs and traditions that may be appropriate to learn about in order to approach things from the right direction. Secondary research is effective to a point but I’ll learn the most via primary research when I’m actually spending my time in the field untangling the narrative and making the photographs and my notes. This is an idea I’ve written about previously. 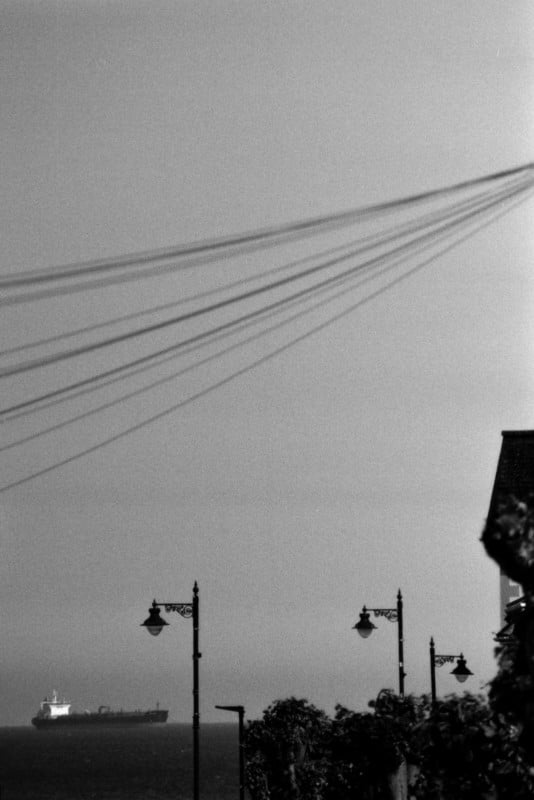 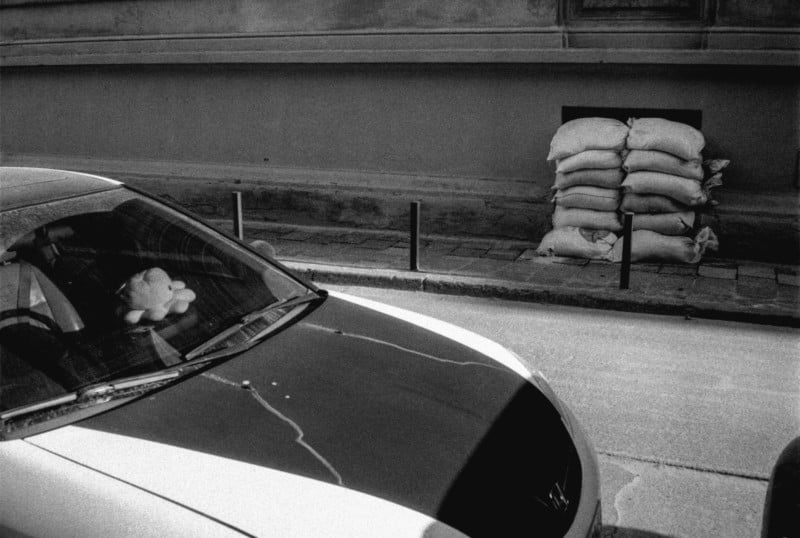 Around this life-centered heart of the story, I will also look for images of the location itself, and ambiance in order to situate and contextualize, to frame a relationship with the people in the story. When I started out these would have been mainly street-style images, wider and holistic, rather than tighter and specific. I associated still life with macro, highly detailed close-ups. However, over time I realized I was missing out on a balance of factors, images that were minimal but still revealing, detailed not as a technical aspect, but detail within a wider scene.

When some refer to detail in a photograph they may mean that the lens has rendered with a very fine stroke, but I don’t think an image with detail is the same as an image of detail. I happily use fine or course-grained films for these kinds of images and as long as the result is clear the actual amount of detail isn’t important as long as the detail itself is clear.

Overlooking these still-life scenes that do not contain heavy human/animal involvement meant those early photo essays were lacking something that my current efforts tangibly have. When applied correctly in sequence these really add polish to an otherwise complete story. I especially like the images that serve to anthropomorphize, adding emotion and empathy in the stillness of left-behind pieces, a “thumbprint” of sorts of those people and communities, or relating to the narrative. 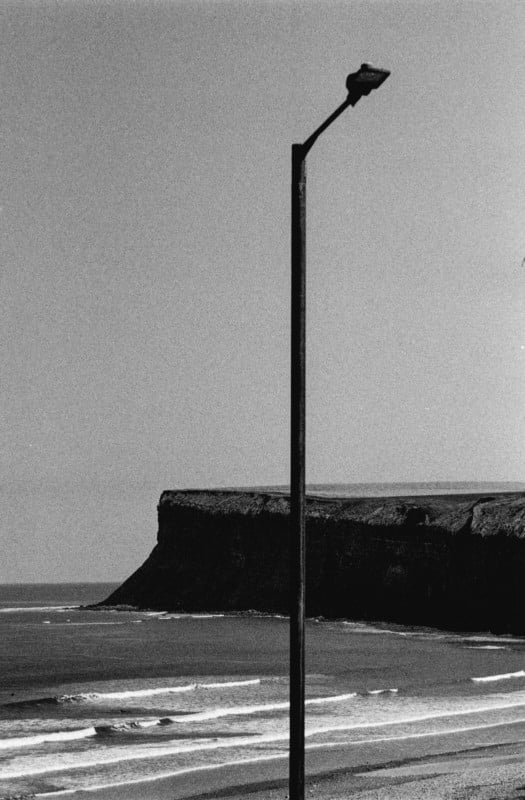 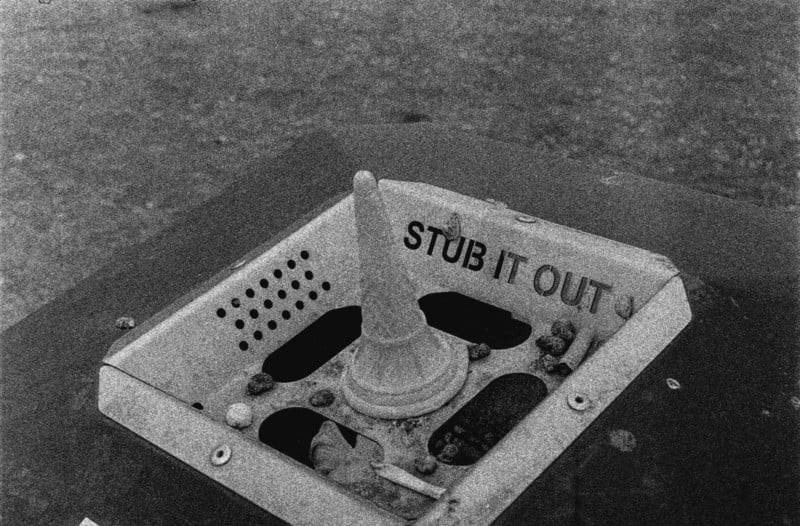 These photographs work really well as transitional elements, interspersed between the powerful main images of a story — the concrete between bricks, holding the structure together. I can present a character and then develop that character before expanding on their story, which means the payoff for the audience is greater, they have a connection beyond a portrait and some words with this person. The same for a location, I can photograph a wider scene, then hone in on some details before moving on to my next main point.

For example, in this sequence from my book D.C. Exclusion Zone I use a full page to introduce the idea of the Shadow Representative using an image where only his flag pin is in focus on his lapel. On the opposite page a short write-up, and an image of the Representative preparing his suit, an anticipation moment setting us up for the next page, which is mainly a scene of the Representative in a meeting, seen from the perspective of someone outside the office looking in. 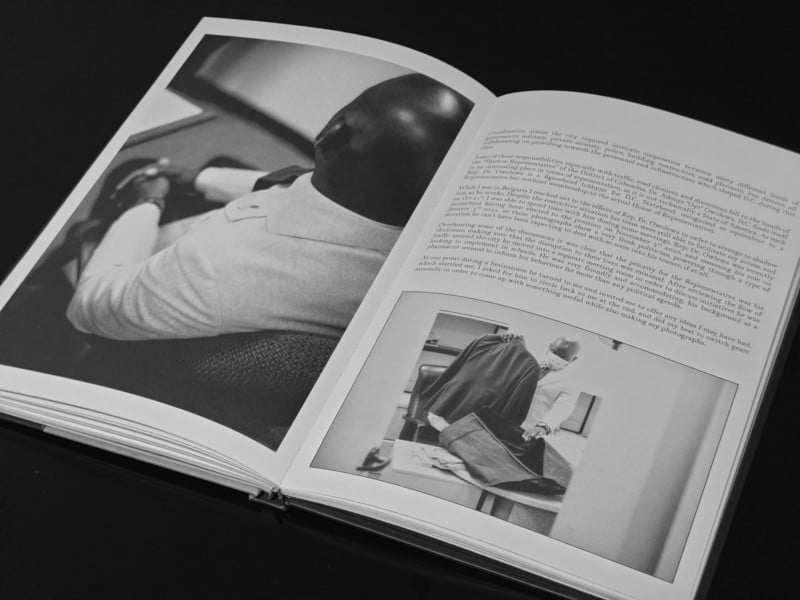 I could have left it at just that sequence – the Representative, prep for the meeting, and the meeting itself, but instead I included below the meeting shot a small selection of still life from inside the office; hands, papers, objects on the desk which contextualize the character of the representative and elaborate on the moment without needing to show anything more than a few essentials. No faces or expressions, those will have their own place, these are just about characterizing and expanding on what I have already introduced. 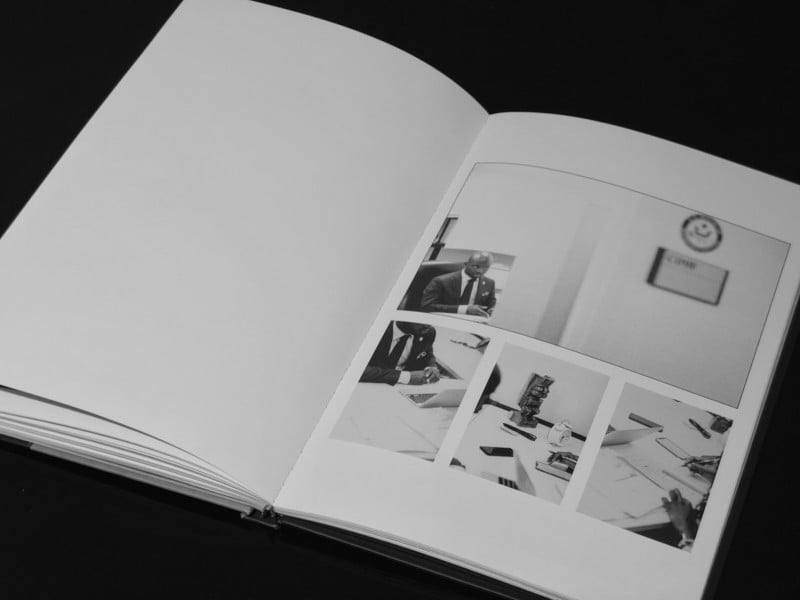 The next page turn book-ends this sequence and leads into the next, with a portrait of intense concentration juxtaposed with the helmet of a national guardsman which is the introduction for the next section of the book. 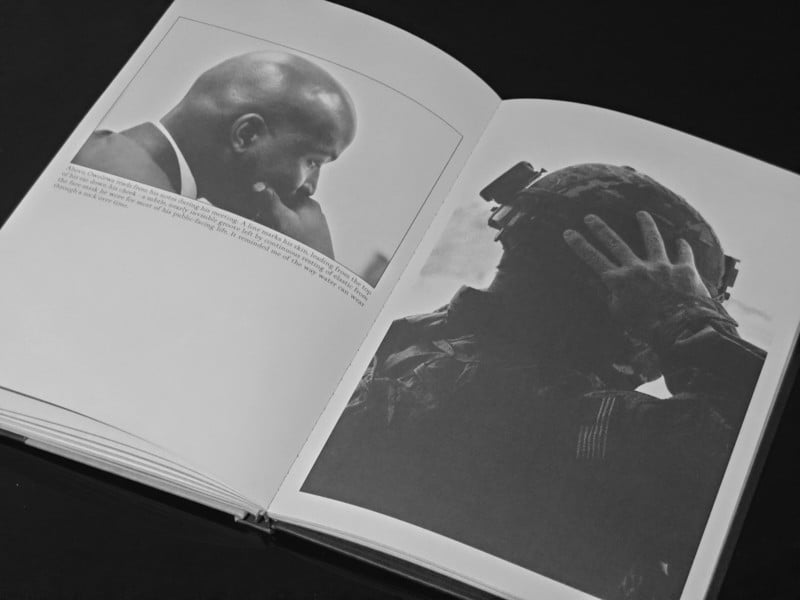 In this way, I have introduced a character and shown him in a few moments about his day, but also manage to explore via the tightly cropped still life images around his desk, giving more information to my reader beyond words, which do not serve to caption the images but rather offer unique information themselves. All of these ideas work together to make a very complete mosaic, formed from many smaller fragments. If the images were simply a portrait and then an image in a meeting there would not be the same depth, and it would feel unsatisfying and incomplete.

It can even be jarring to have two stunning images in sequence, a peaceful still life can cut through the drama, balance out the emotion, and allow each image to hit on its own terms with a rest in between, almost like music – two crescendos can become discordant without a break. Complexity is complemented by simplicity; they really do enhance the experience of the other when viewed with this intentional presentation. 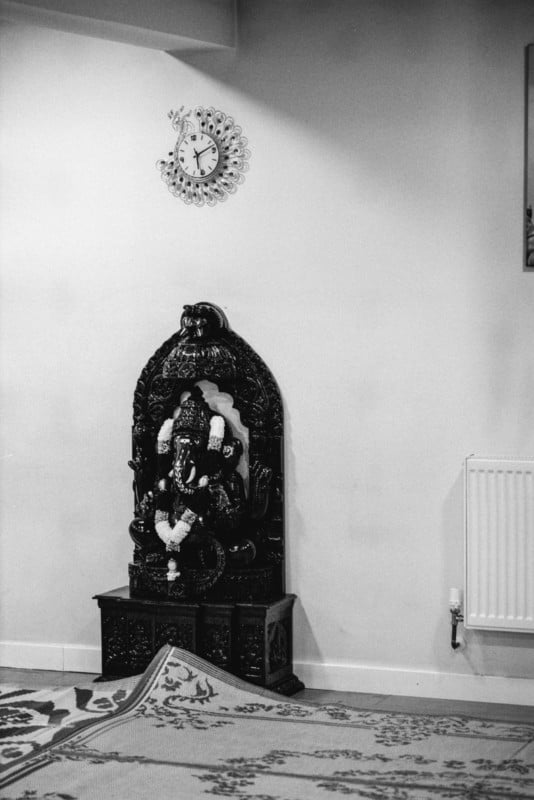 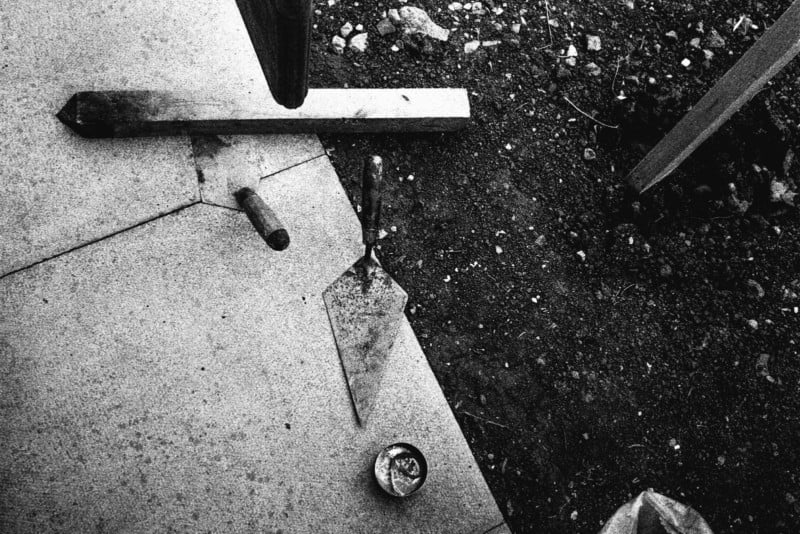 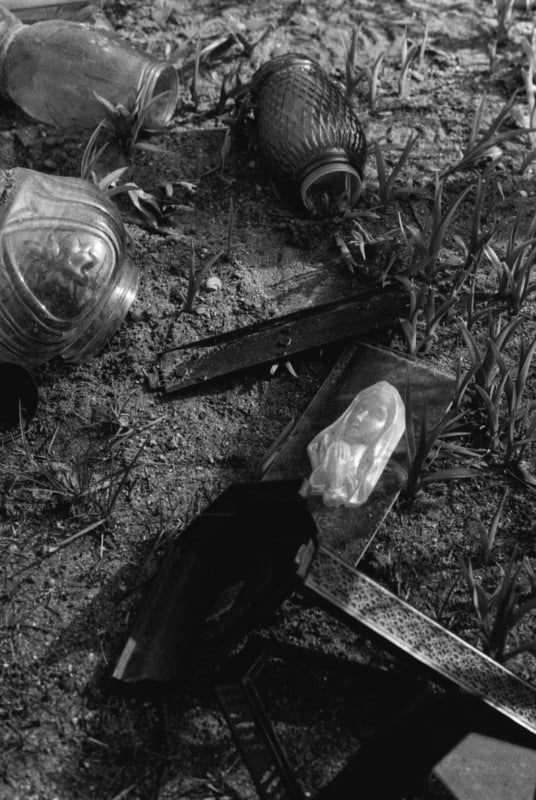 My projects will live their best life in print, as sequenced stories, and with this in mind, I am able to work in a way that has this medium as my end goal, not individual photographs. When working in a space I can always use downtime to seek out these smaller-scale but significant pieces to add to that puzzle. It means I can photograph freely and not worry specifically about whether or not I know what that image can be used for, because it’s better to have an archive full of solutions for problems I haven’t encountered yet, especially when it comes to long-term projects spanning years, where I may not be able to return to the context of a specific chapter and produce something that I discover I need while editing pages together.

The best time to discover an idea is before you need it.

P.S. I recently collaborated with Sagar Kharecha to document the laying of a Foundation Stone that will rest under the foundation of the extension to Milton Keynes Neath Hill Murugan Temple. While photographing the ceremony we also photographed still life within the space, which worked as I have described to help tie the narrative together. You can find copies of our zine, which contains this story, here while stocks last.