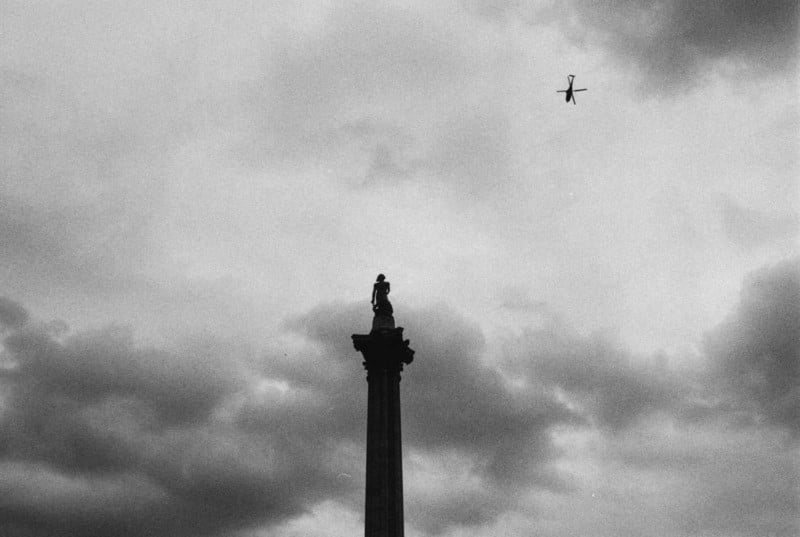 Minimalism can be such an effective and beautiful way to present information, especially in photographs where there needs to be only one subject or central point of clarity. However, while many seem to subscribe to the “less is more” sensibility of minimalism, which can mean chiseling away at anything non-essential, I don’t find this a useful or practical way to work when it comes to documentary photography.

Documentary photography relies on aspects of both journalistic storytelling and artistic aesthetic – an effective photo-essay should contain the narrative elements of who, what, when, where, and why, combined with the light, composition, and “moment” of what makes photography such a powerful visual medium. 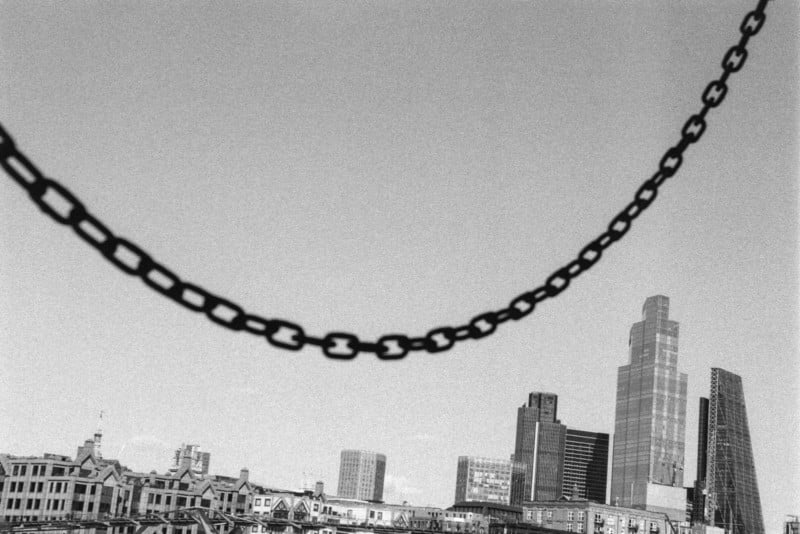 While individual minimalistic compositions are truly lovely and can work fantastically in small format presentations like Instagram, they are not always the most ideal way to tell a story with as few “moving parts” as possible. By this I mean that using one photograph for one idea at a time you can actually draw out the storytelling process beyond what would be possible with a more “full” image. Taking those five storytelling Ws, a minimalist approach to individual photographs would imply one photograph depicting who, one depicting what, one depicting where, and so on.

Minimalism applied across a project can mean putting more information into individual photographs but allowing the story to be told in fewer photographs. Currently, I try to search for ways to include as much as possible into a single image, but to still make sure that nothing extraneous interferes with the overall frame. This maintains minimalism by including only the essentials, and nothing more, but the essentials can be more than one thing at a time. 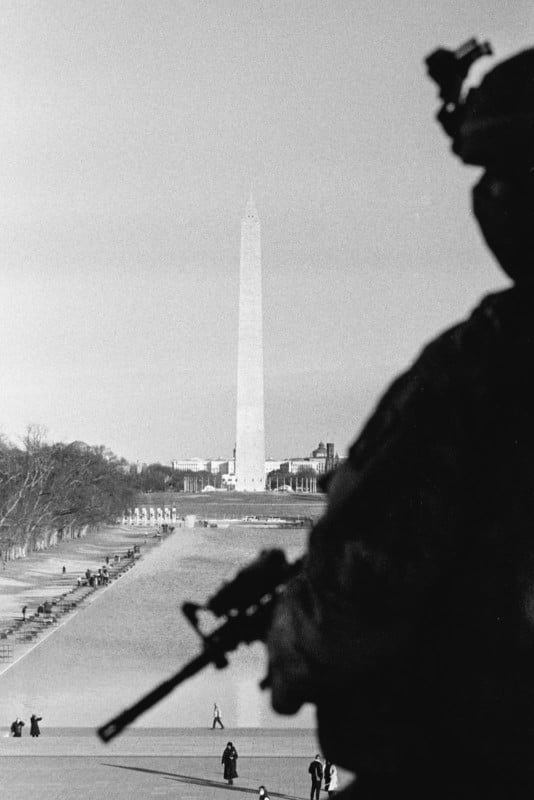 This photograph made in DC during the inauguration is one of my clearest storytelling images to date. It features strong iconography in three clear layers, with the National Guardsman and National Monument being the most prominent. Despite this, it doesn’t tell the entire story in one image and needs to be viewed in sequence for the full account of that time.

A more reductionist, minimalist approach to this might have involved a photograph of the monument against the sky, a guardsman with a plainer background – each subject in their own space, connected by association in the sequence. I think this would be a less effective way to really draw connections between these elements and would make the overall story confusing and harder to consume. 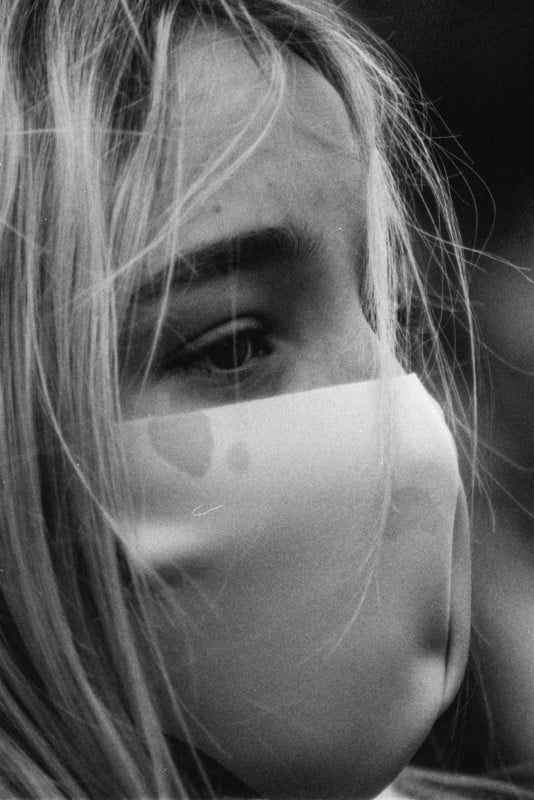 This candid portrait was made during a commemorative vigil for Sarah Everard in Clapham. This photograph doesn’t contain enough on its own to effectively tell that story, but it does contain a few key ideas — the teardrop, soaked into the mask, give you a sense of what: an emotion, as well as when: pandemic-era story. This means that this photograph can work as part of a few different stories, depending on what I choose to sequence it into.

Here are a few moments made during the recent VE-Day memorial at a Russian monument in Lambeth. 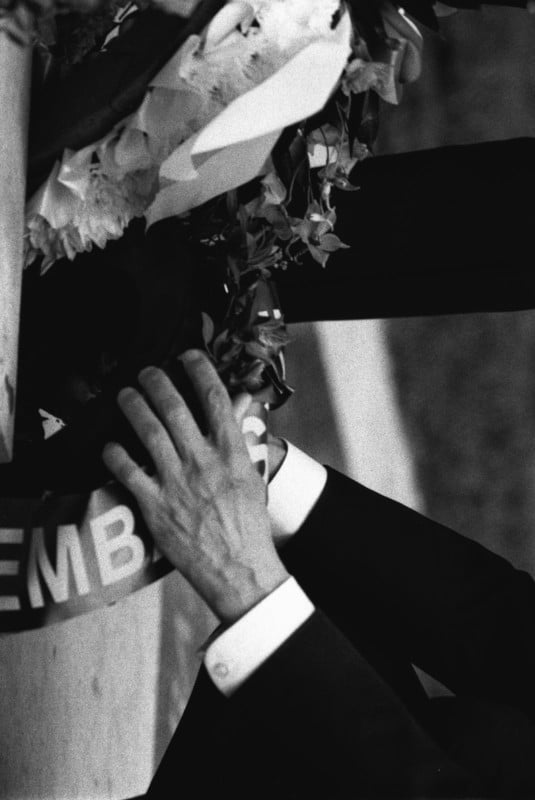 This first is the most minimal – simply hands and a wreath, you can tell someone is laying flowers, but have no idea of nationality or context. You can just about understand the word “Remember” from the available letters, but this is a stretch and not a good way to communicate with someone seeing the story for the first time. 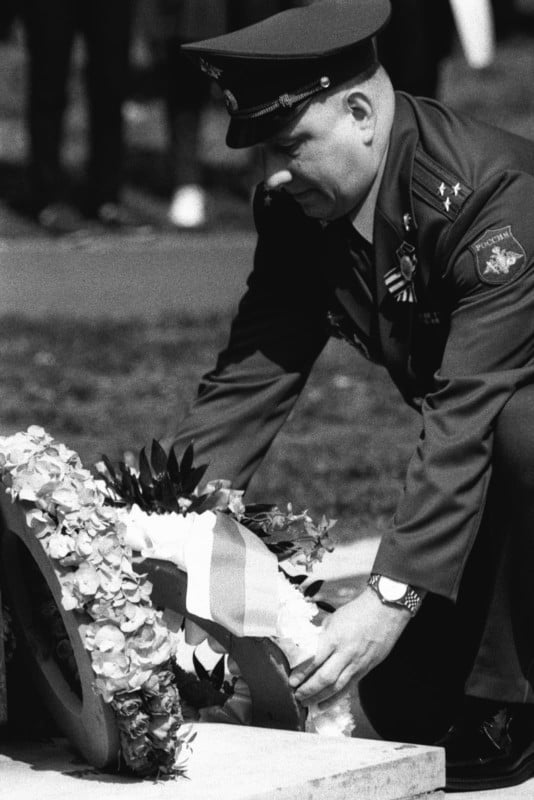 This second is an improvement — the uniform gives a lot of context and the wreath doesn’t need to say “remember” because the semiotic meaning is fairly universal. 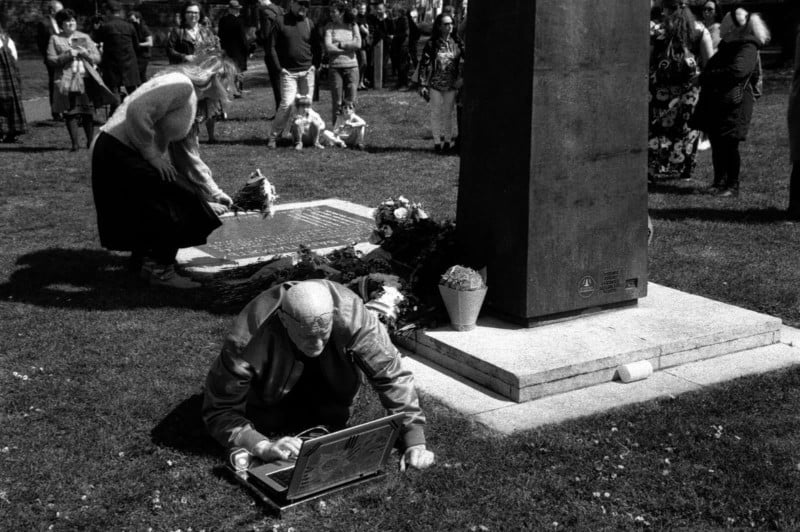 This third frame is a little more busy and is less effective as a standalone. The foreground interest, the man working on the playlist, isn’t really relevant to the memorial scene in the background, the woman laying flowers isn’t as clear in the frame, but it does include more of the scene and detail of the memorial. This one is more of a street photograph, with the story to be interpreted rather than clearly told. 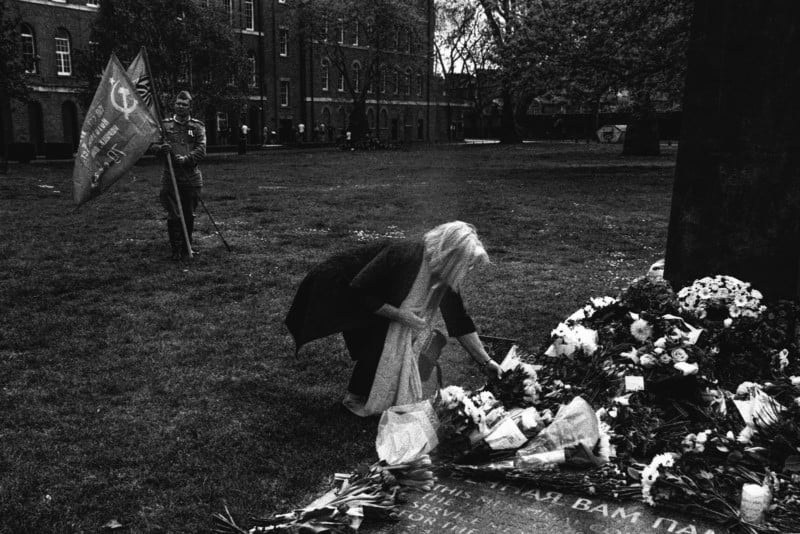 This last frame has the best balance of detail and context, and it gives the clearest idea of the story — the classic uniform and the hammer and sickle on the flags as background to the memorial piled high with flowers. It’s a more nuanced scene than the second frame, which is more of an environmental portrait than an actual scene. It is not “minimalist” in any traditional or aesthetic way, but it does contain exactly what I wanted it to in order to describe the event.

Now imagine if these characters were rendered as silhouettes, you would lose that information of the “who”. In the previous scene in DC with the Monument and Guardsman, the silhouetted soldier works without extra detail, as the outline is enough to identify who, and from that plus the Monument you can extrapolate the where, and possibly the when. Photographing this scene in a detailed and descriptive way offers so much more than the perhaps more aesthetic and abstract interpretations, which require a lot more explaining elsewhere in the project to actually justify their inclusion in a project.

In creating these more complex, “packed with information” photographs there is a side benefit towards my print output, mainly that these kinds of images tend to not work as well as the more graphic styled photographs that tend to succeed on the smaller Instagram format. It is almost forcing my hand to put my work into print, in order for them to fully work as sequenced, large format publications, which tell stories with far more impact than is available on the digital screen. The attention span for something printed and bought — intrinsic value — is greater than what will be paid to the screen, which means all the details and aspects of an image can be taken in and appreciated.

About the author: Simon King is a London-based photographer and photojournalist, currently working on a number of long-term documentary and street photography projects. The opinions expressed in this article are solely those of the author. You can follow his work on Instagram and you can read more of his thoughts on photography day-to-day over on his personal blog. Simon also teaches a short course in Street Photography at UAL, which can be read about here.

How To Shoot Professional Headshots with Natural and Continuous Light