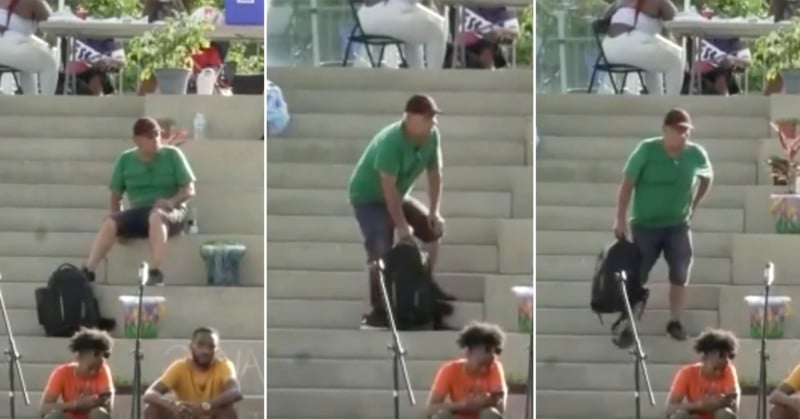 A backpack full of thousands in camera gear, laptops, and hard drives was stolen during an anti-racism rally in Toronto, ON this past weekend. The kicker? The videographer who owned the gear captured the entire incident on video.

According to Global News, the incident took place on Sunday at an anti-racism demonstration at Nathan Phillips Square in Toronto. The bag belongs to producer and videographer Javon Martin, who had set up one of his other cameras to capture the rally, and incidentally captured the theft of his own gear on camera.

You can see the theft unfold in the news report below. At one point, when the videographer’s back was turned, a man stands up, looks around, and then simply picks up the backpack and walks away:

According to the news report, the bag contained between $5,000 and $10,000 CAD (~$3,700 – $7,400 USD) worth of equipment, but Martin said that he didn’t actually file a police report. While Toronto PD is looking into the incident, the videographer supports defunding the police and said he would rather see those resources spent on supporting the Black community.

In the end, the gear he’s most upset about losing wasn’t the cameras or lenses or laptops—it’s the client data and footage that was on hard drives that were in the bag.

“The hard drives and all the client data and all the footage that we’ve actually recorded is what we’re really missing,” says Martin. “All the [gear] is replaceable, but the events that happened in the past, even the ones before social distancing, we can’t get those back. That’s the real value that was lost.”

Since posting about the incident on social media, Martin says he’s seen an outpouring of support, and he’s hopeful someone will be able to come forward and help him retrieve his gear.

Shooting an Automotive Campaign, On Location, Over FaceTime

Falling in Love with the Process, Or: Why I Shoot Landscape Photography