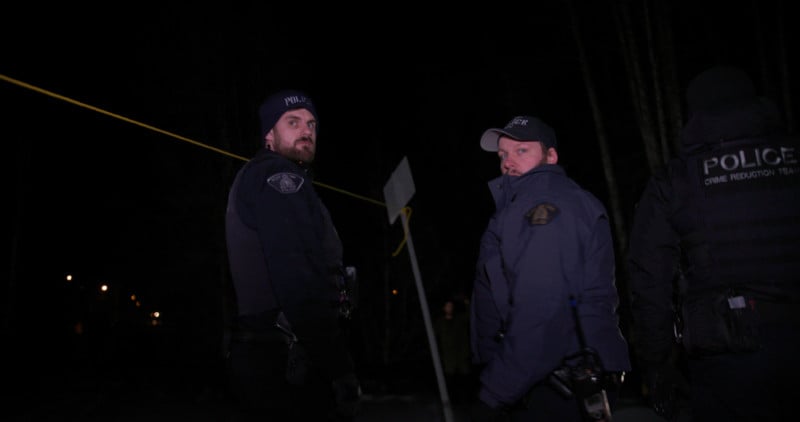 US documentary filmmaker Melissa Cox had a run-in with the Royal Canadian Mounted Police (RCMP) this week while trying to document an indigenous protest in British Columbia. Despite the fact that she is a member of the press, the RCMP chose to arrest Cox, allegedly using “undue force” and tampering with her camera equipment in the aftermath.

Cox is currently working on a feature called “Yint’ah,” which documents the Wet’suwet’en First Nation land defenders’ efforts to resist a pipeline project by Coastal GasLink. On February 24th, while filming the arrest of Gitxsan hereditary Chief Spookw at a railroad blockade, the RCMP put her in handcuffs and carelessly dropped her camera on the ground.

Later, they were seen appearing to tamper with the camera and “pressing various buttons,” according to a statement by the film’s producers.

Speaking with PetaPixel over email, Cox said that the RCMP were clearly trying to prevent her from documenting the arrest of 71 year-old Head House Chief and Matriarch Gwininitxw (Yvonne Lattie) on her own territory. The tactic ultimately worked, as Cox was unable to leave the scene or reposition herself.

Unfortunately, says Cox, this kind of behavior lines up with what she has been experiencing for the past several months.

“While reporting on Wet’suwet’en and Gitxsan Territories I have witnessed alarming levels of violent state repression of independent media,” she tells PetaPixel. “Since beginning to report on this issue of immense public importance, myself and my colleagues have been detained, repeatedly threatened with arrest, had our access limited by the imposition of an ‘illegal’ exclusion zone, and have been told what we can and cannot document (which included threats of arrest from RCMP if we documented tactical teams).”

“A free press is essential to a functioning democracy and is a pillar for peace,” she continued. “The repression of journalists covering this story across Canada is being enacted by police forces everywhere you look. The way that I was treated made me feel as if I was a target that needed to be neutralized.”

Given that she was easily identifiable as press—Cox’ producers maintain the she was wearing NPPA credentials at the time of her arrest—the photojournalism community has reacted with understandable concern about what this kind of reaction means for freedom of the press in Canada.

“The NPPA is very concerned about reports of the arrest and treatment of Melissa Cox while she was documenting the protest,” NPPA President Andrew Stanfill tells PetaPixel. “We believe this work was in the public interest and we are working with the CPJ and other press groups in urging that the charges be dismissed.”

Meanwhile, Reporters without Borders (RSF) published its own statement on the arrest earlier today.

“RSF is deeply alarmed to learn the RCMP arrested a documentary filmmaker while she was covering the protests taking place in support of Wet’suwet’en Nation,” said Dokhi Fassihian, Executive Director of RSF’s North America bureau. “The authorities should not file charges against Melissa Cox. And further, the police must ensure journalists covering the Wet’suwet’en protests can do their work without fear of punitive action.”

Cox was released 7 hours after her arrest and has yet to be charged; however, she has been ordered to keep 10 meters off any Canadian National (CN) Rail property or work-site, and will need to appear in court on April 24th, when she will potentially “face further prosecution.” These conditions make it difficult, if not impossible, for her to continue her work by documenting further rail blockades.

In response to our request for comment, Cpl. Madonna Saunderson, District Advisory NCO of Media Relations for the RCMP North District, pointed us towards this RCMP press release about the arrests that took place on February 24th, and provided the following response:

I have not been able to speak to all those present during the arrests, but was advised that all those at the location were advised of the injunction, told to stand back, move off of the tracks and not to interfere with the police operations.

There were a number of people who were recording and we have not been able to confirm whether anyone identified themselves as a journalist or media. However, the police officer information and body camera recordings are being downloaded and compiled so they can be provided to the courts moving forward.

The press release confirms that the RCMP “attended and arrested a total of 14 individuals who refused to leave CN Rail’s private property (rail tracks),” in keeping with a court-ordered injunction obtained by CN Rail, but makes no mention of press in general or Ms. Cox in particular.

Image credits: Photos by Melissa Cox and used with permission.