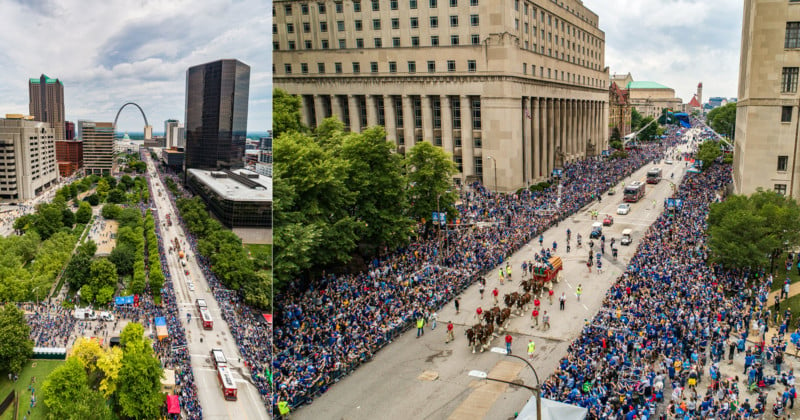 My name is Justin Barr, and I’m a photographer in St. Louis, Missouri, who was recently hired to shoot the Blues’ Stanley Cup victory parade. I’m still in shock over the series of events.

During the St. Louis Blues’ historic run for the Stanley Cup, they had watch parties in downtown St. Louis. On June 3rd, the Blues played Boston in St. Louis. They had a big production before the game with a band playing on an outdoor stage then they were showing the game on jumbotrons outside.

I wanted to get a shot of the crowd watching the band outside, but I got stuck at work late. By the time I finally got downtown, the band was done and most of the people had moved inside the Enterprise Center to get ready for the game. I was bummed that the crowd was so small but decided to put the drone up anyway and got this shot: 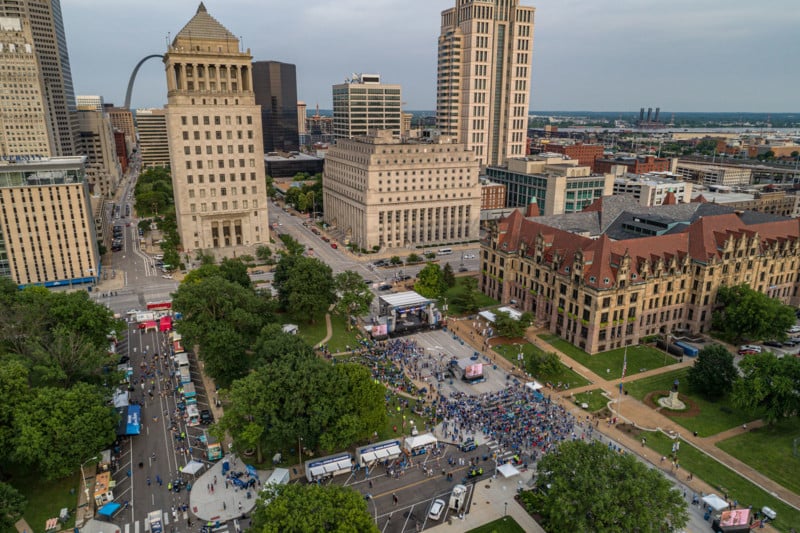 The crowd was minimal and unimpressive. But it was interesting to see so I posted on my Instagram anyway.

A couple of days later, I got an email from someone at the St. Louis Sports Commission. They had seen my photo and wanted to hire me for the Game 6 outdoor watch party that was happening the following Sunday. The Blues were in town again and this time, the crowd was borderline catastrophic. They had planned on about 30k people for the outdoor watch party. The estimate was 75k but they couldn’t know for sure. I had to really watch my launch points but I got some good shots and the Sports Commission was impressed. 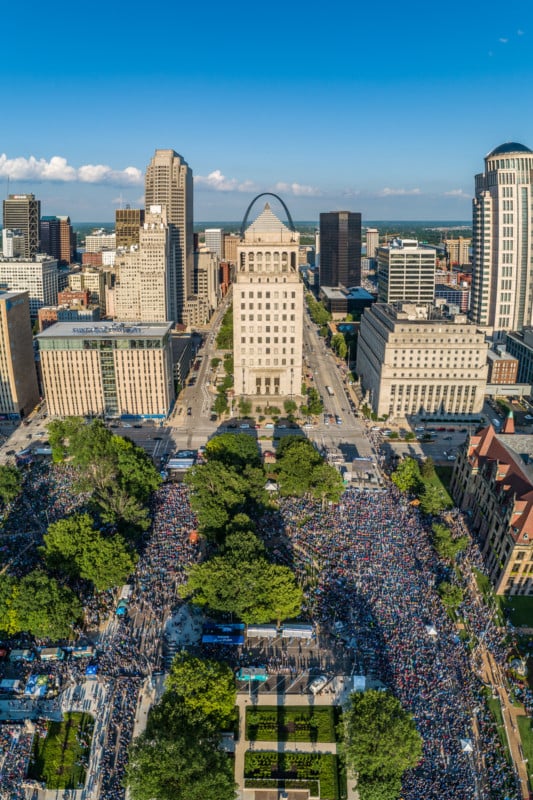 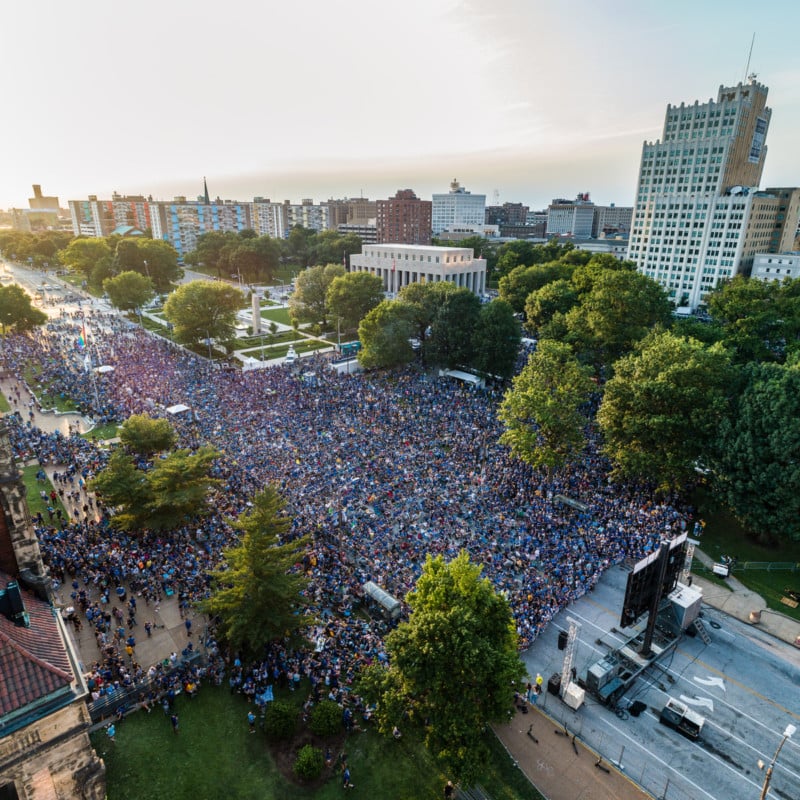 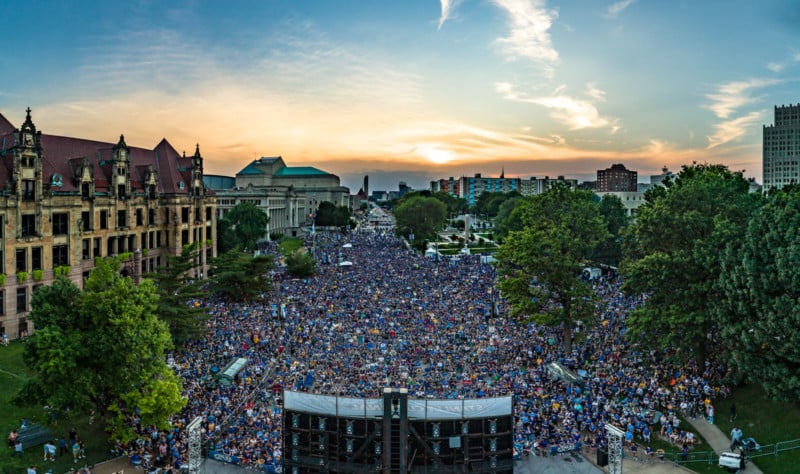 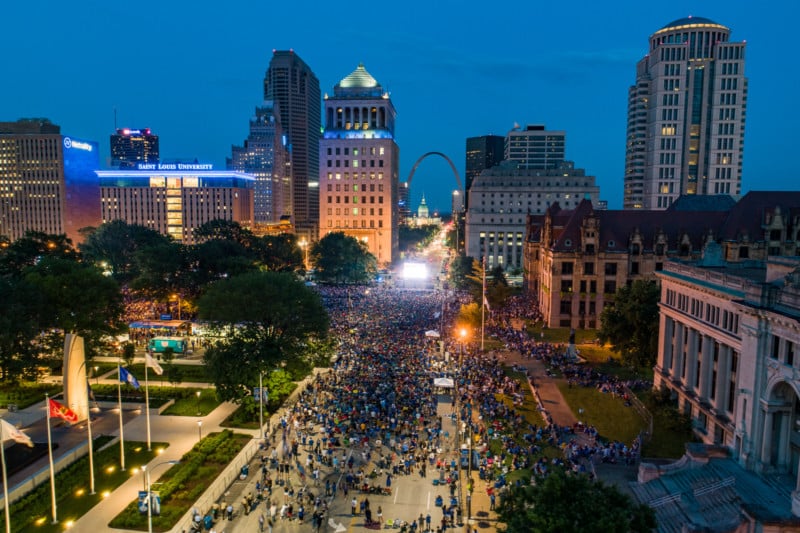 They really liked this shot: 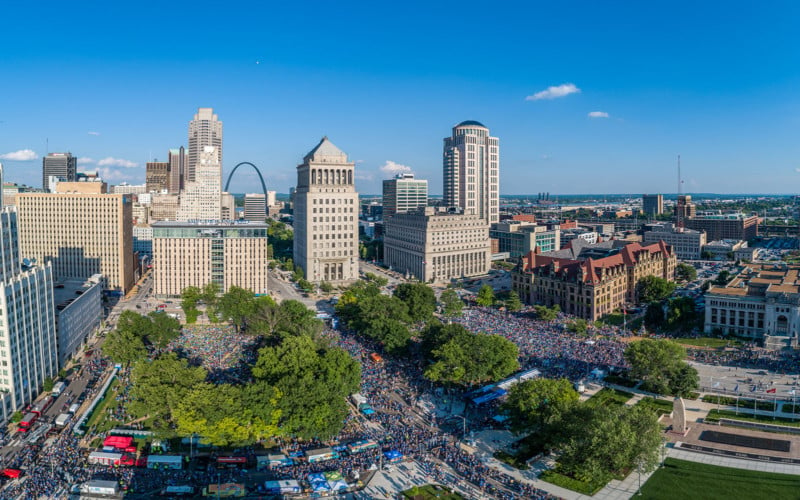 I edited and uploaded the photos.

Three days later the Blues won the Stanley Cup. I get another email and they want me to be the exclusive drone photographer for the celebratory parade through downtown St. Louis. Of course, I’m flipping out because this is the first time the Blues have won the Stanley Cup in their 52 year history.

I get my waivers in place, and they notify the local police department that I am to be the only drone in the vicinity. I scout for a safe launch/land site about halfway down the route and get to work. It was awesome to have the opportunity to be the aerial photographer that captured this first ever Stanley Cup parade for the Blues. 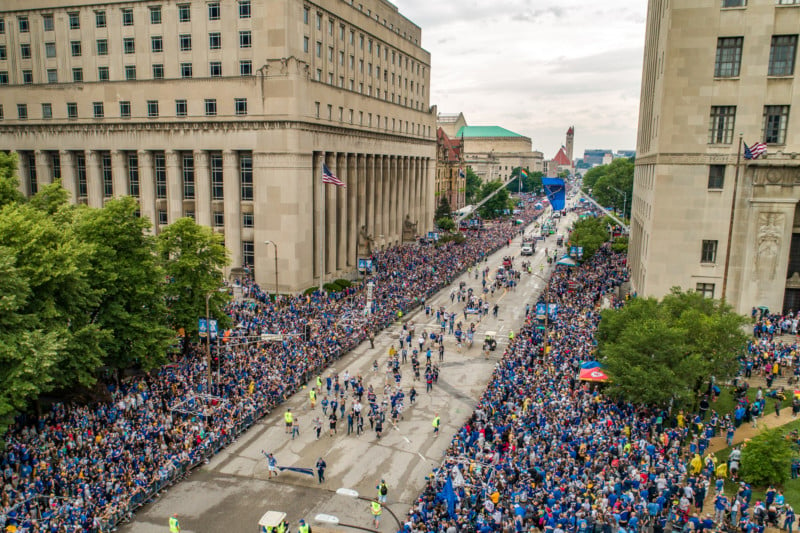 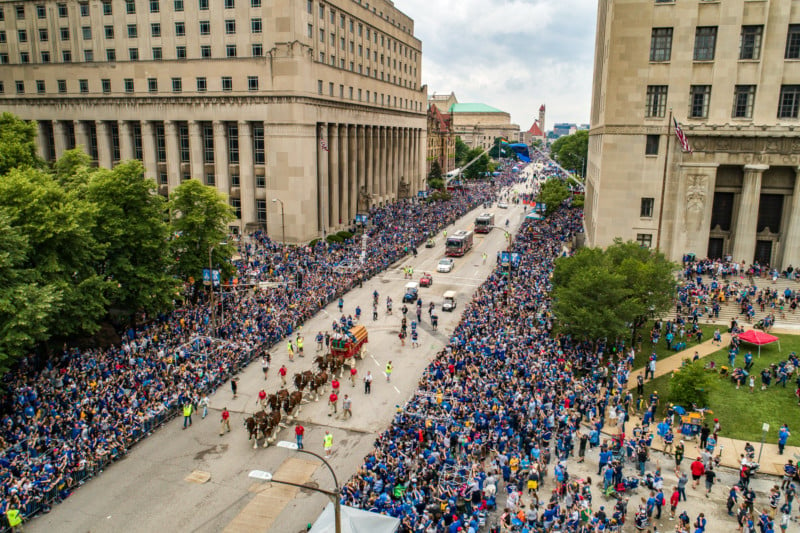 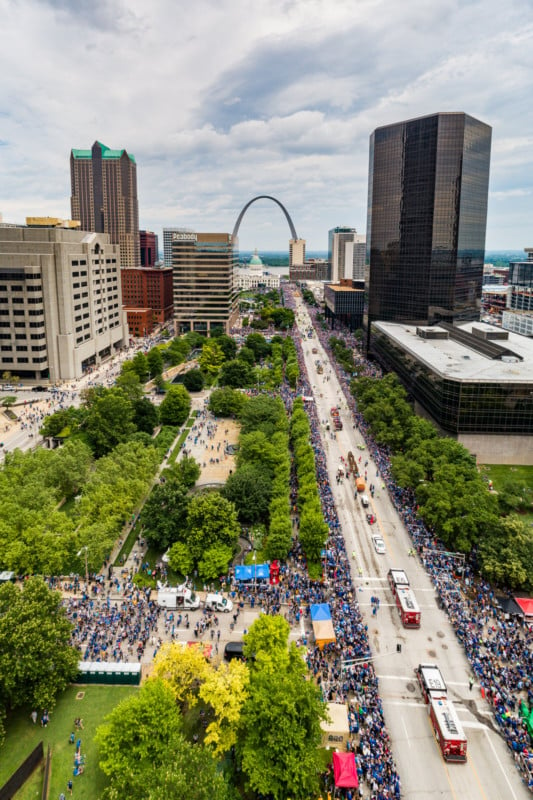 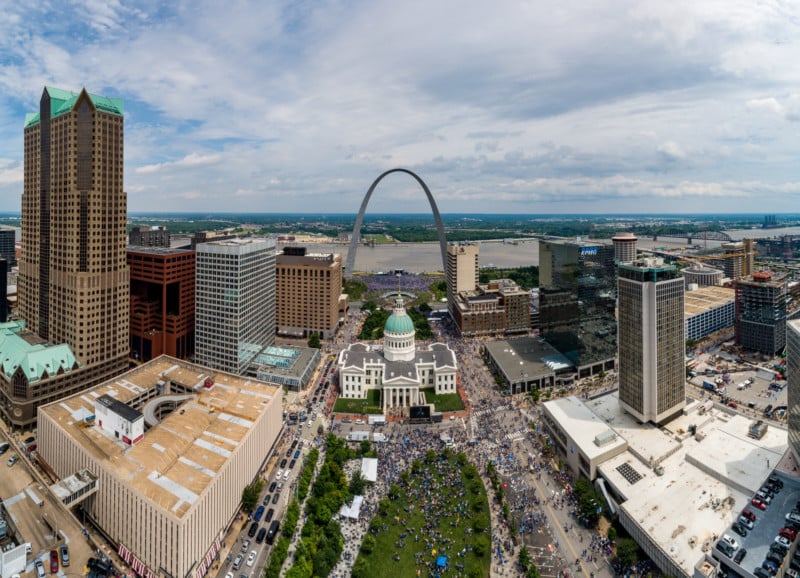 One of my last shots had the Budweiser Clydesdales bringing up the rear with the players’ floats spread out down Market Street. 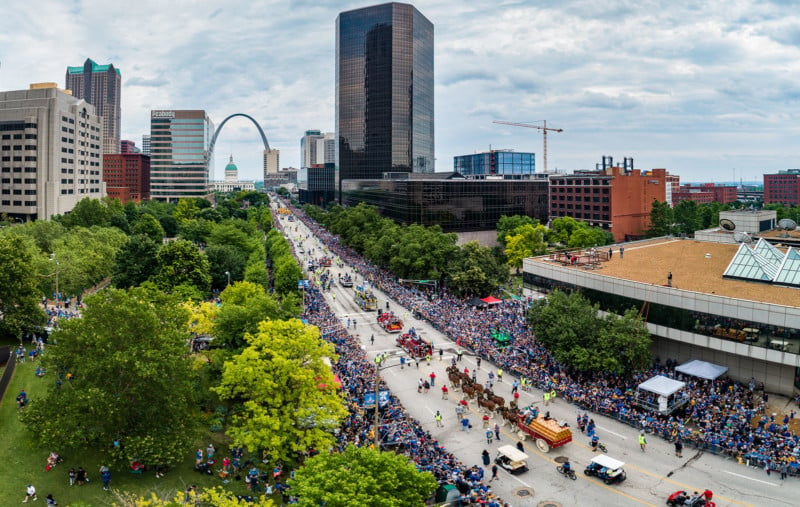 Since I sent over my photos, the Blues have been sharing them online and even made desktop wallpapers out of a few of my photos. 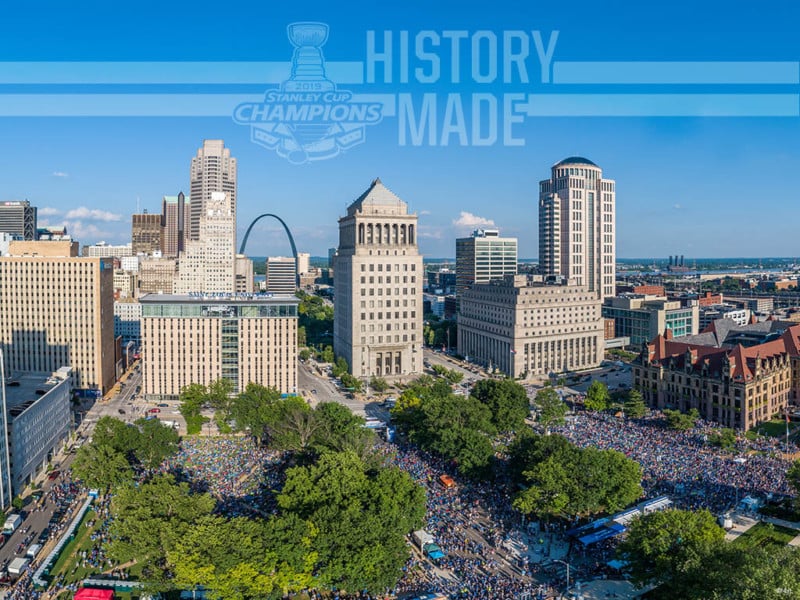 I’ve been on Cloud 9 since then. Two years ago, I was taking my 4-year-old daughter around town, showing her sites and taking drone photos of landmarks for my own enjoyment. I never would have guessed that they would be well received by our city and I would end up shooting for the St. Louis Blues.

Long story short, don’t be afraid to take a chance. You never know what might come of it!

About the author: Justin Barr is a professional photographer and FAA-certified drone operator based in St. Louis, Missouri. The opinions expressed in this article are solely those of the author. You can find more of Barr’s work on his website, Facebook, and Instagram.

Photos of Kyrgyzstan, The Beauty of the South

Why Nikon is Failing in the Full-Frame Mirrorless Camera Race