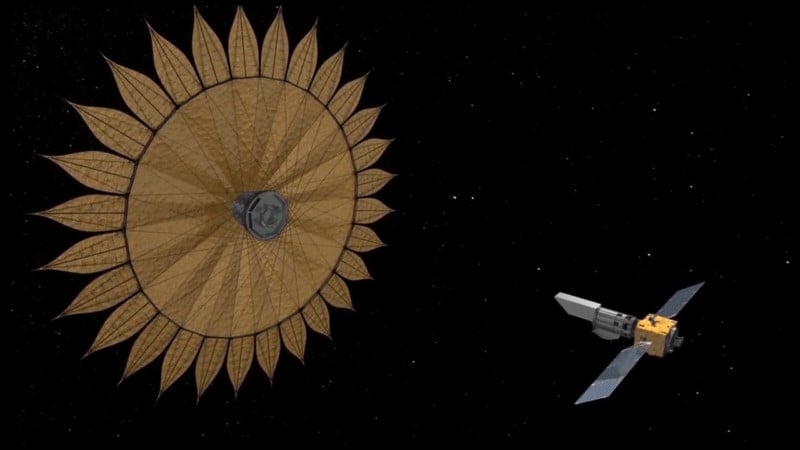 Photographers use tools called flags to block and control light. NASA has detailed a new technology called a starshade that’s essentially a gigantic flag in space for doing photo shoots with space telescopes.

“Although starshades have never flown in space, they hold the potential to enable groundbreaking observations of planets beyond our solar system, including pictures of planets as small as Earth,” NASA writes.

A starshade mission would involve two spacecraft working together with extreme precision. One would be a space telescope (the camera) that can hunt for and photograph planets that orbit stars outside of our solar system. The other spacecraft would be a large, flat shade called a starshade (the flag) flown about 25,000 miles (40,000km) away in between the telescope and the star system being photographed.

After getting in position, the starshade (which would be tens of feet in diameter) would unfurl its “petals” like a blooming flower and block direct light from the star, allowing the telescope to see and photograph the orbiting planets more clearly.

But because it’s located 25,000 miles away, the “flag” would need to stay extremely aligned for it to serve its purpose. If it’s misaligned by over 3 feet (1m), the light from the star would spill over the edges of the starshade and ruin any potential photo of the faint exoplanets.

“The distances we’re talking about for the starshade technology are kind of hard to imagine,” says JPL engineer Michael Bottom. “If the starshade were scaled down to the size of a drink coaster, the telescope would be the size of a pencil eraser and they’d be separated by about 60 miles [100 kilometers].

“Now imagine those two objects are free-floating in space. They’re both experiencing these little tugs and nudges from gravity and other forces, and over that distance we’re trying to keep them both precisely aligned to within about 2 millimeters.”

Here’s a 2-minute NASA video illustrating how a starshade photo shoot would work:

Getting this type of starshade photo shoot to work could open the floodgates for astronomers to directly photograph exoplanets, which today are mostly observed indirectly except for in rare cases. The first starshade mission could potentially be in the late 2020s if planning continues to go well.

“Blocking out starlight is key to performing more direct imaging and, eventually, to carrying out in-depth studies of planetary atmospheres or finding hints about the surface features of rocky worlds,” NASA says. “Such studies have the potential to reveal signs of life beyond Earth for the first time.”