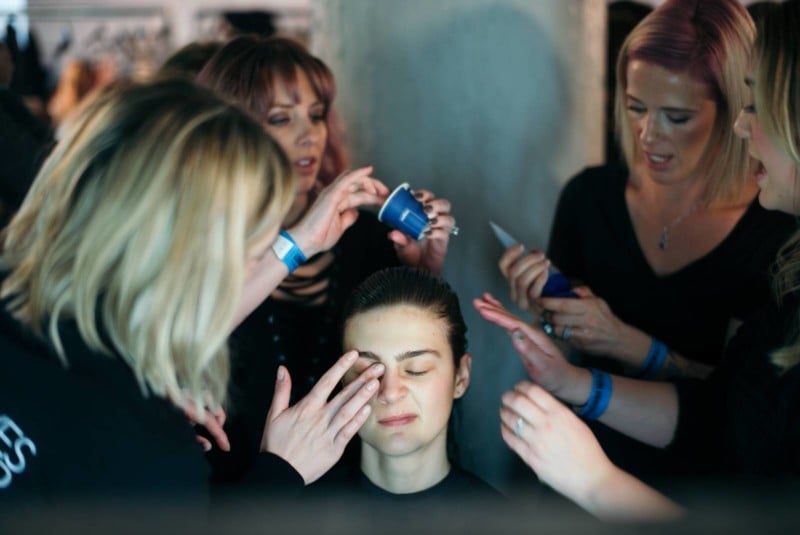 One of my favorite environments for photojournalism is the world of fashion, which I fell into almost accidentally when I first started out as a photographer. It has been one of the most interesting, rewarding experiences both artistically and personally, and I would like to share some thoughts on working in that scene.

I shot my first London Fashion Week in 2016, not long after graduating from university with a degree in Advertising. I researched and contacted the PR companies directly with my portfolio, as well as some notes on my intended coverage. At the time I never considered that there might be something to see other than the presentations and catwalks, but I was wrong.

At the first show I ever worked at, presented by Marta Jakubowski, I found that although I was having a great time securing editorial images of the actual presentation I was finding it far more interesting to shoot the moments between models changing positions or the designer altering the scene – these were far more dynamic and told more of a story than the simple posed portraits.

The “moneymaking” editorial shots were fairly easy and non-time consuming as everything including the lighting is already set up when you arrive. It’s just a matter of covering the room methodically to capture every model and every detail in the collection before most photographers are “done” and move to the next show. However, I wanted to come away with more than just editorial work and began to negotiate access to backstage at the events I was attending in the hopes of a better collection of storytelling images.

Since 2016 I’ve shot at over forty fashion shows, covering backstage on around half. I have a few series in the works from these, which I’ll hopefully run as books and in gallery spaces. Over that time my workflow has evolved, and there are a few tips I’d like to share with anyone interested in shooting in similar environments.

When you get backstage there are a number of factors that can limit the quality of images you come away with, most pressing of which is time. You’ll have maybe an hour if you’re lucky between arriving and the show starting, and unless you’re only there for the backstage images you’ll need to be heading out directly to get a good spot if it’s a catwalk, or to queue if it’s a presentation space.
This means that your images will be limited, and every shot counts.

1. Look at Faces, not the Fashion 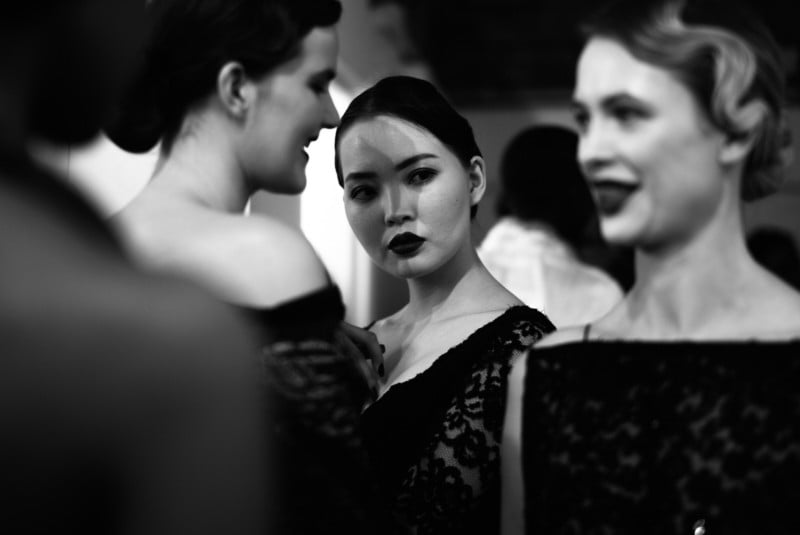 The best storytelling moments can be seen in people’s faces, and I think this is true in most forms of photojournalism. Photographing in a room full of the highest class of models wearing some of the most stylish or outlandish designs can be very distracting. It can be tempting to go for “easy” shots, not too dissimilar to editorial images you’d likely be duplicating later on during the show itself.

By watching peoples faces you can pre-empt these moments and take advantage of the unique moments and expressions occurring in this informal setting to capture some genuine interactions – laughter, stress, the frantic movement of the make-up team and the designers.

Backstage environments are often very cramped, and it helps to carry the smallest gear possible. This will mean having less of a physical footprint, making it easier and faster to navigate the room. It will also mean fewer lens changes and more time spent concentrating on the scene than worrying about gear.

I prefer to use a 50mm but will also use a 90mm to really isolate my subjects. 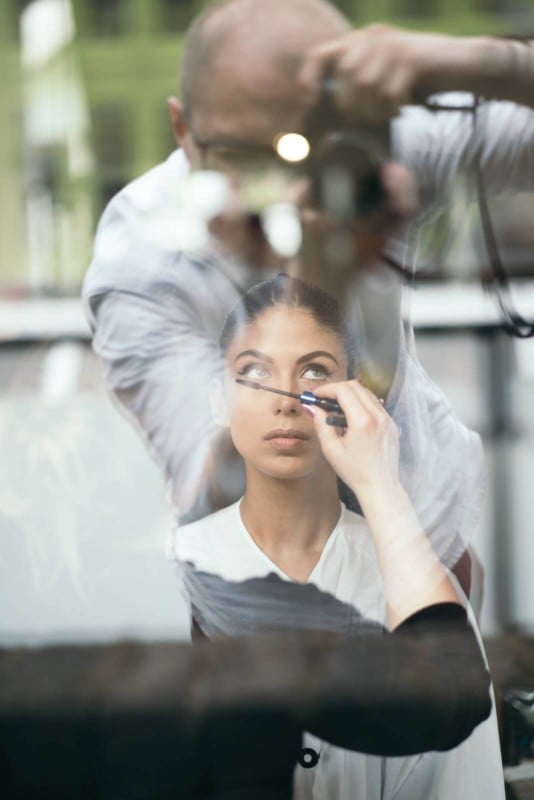 However, I know many other photographers who will use anything from 24mm to 35mm in order to photograph a bit more of the context. I’ve even worked next to photographers shooting with large fisheye type lenses paired with creative flashes and gels, and even prisms for special effects.

It really is a matter of personal preference, and I do urge you to experiment with different options. When it comes to taking it seriously however you must put that experimentation to practice and use lenses you have a deep literacy with. 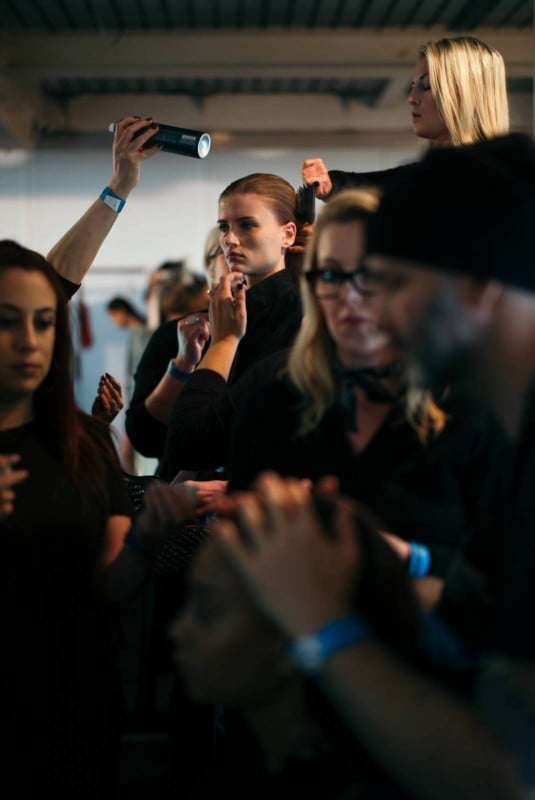 Backstage, especially during early prep, is one of the most hectic and crowded environments I have ever worked in, and that includes riots and protests. Maintaining situational awareness while working is always important, but even more so in such enclosed spaces. Trip hazards like wires, makeup stands, and other people will be prevalent. It’s also good to keep out of the line of view of fellow photographers, to be mindful that they have just as much right to be there as you.

It can also be good to keep track of who is good to be shot and who may be busy or unready for the camera. Some models may be waiting for things on their face to dry or for a fitting to be completed and so they may be unable to react to the camera. 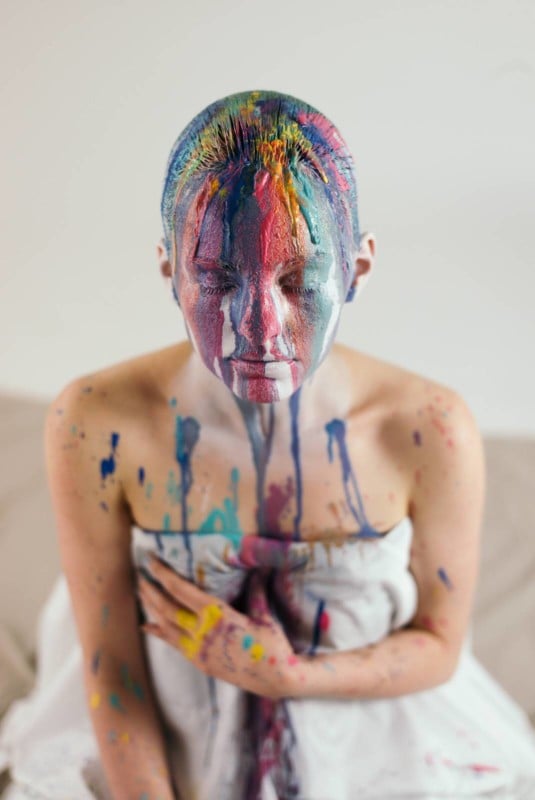 This is a slightly more technical tip, but still very useful for keeping your gear safe and ready to shoot. The air backstage is often full of chemicals, all kinds of hairspray, perfumes, and other substances. Keeping the front of your lens covered with a clear element makes it easy to quickly clean and keeps the actual front element free from anything that may corrode the coatings or glass.

I usually keep a UV filter on my lenses as a transparent lens cap so I never have to fumble with anything and risk losing a shot. 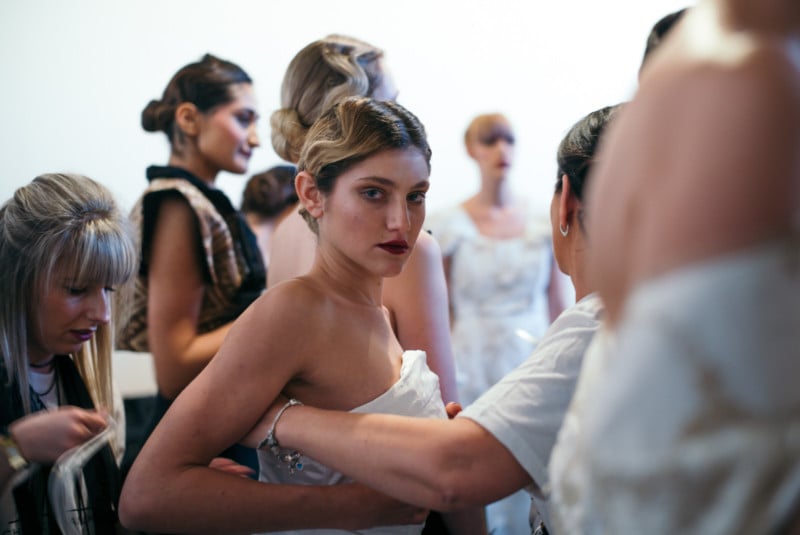 Although this tip applies to basically every genre I think the stakes can be much higher in a fashion environment. As a photographer, there is an implicit threat that a “bad” photograph could show someone in a poor light, which could affect a models career.

You are there by invitation, in someone else’s workspace, and usually one of the least important people in the grand scheme of the preparation going on. Mutual respect can go a long way to helping everyone around you feel comfortable with your role and leads to people being more likely to help you by giving you space or being patient while you frame an image. 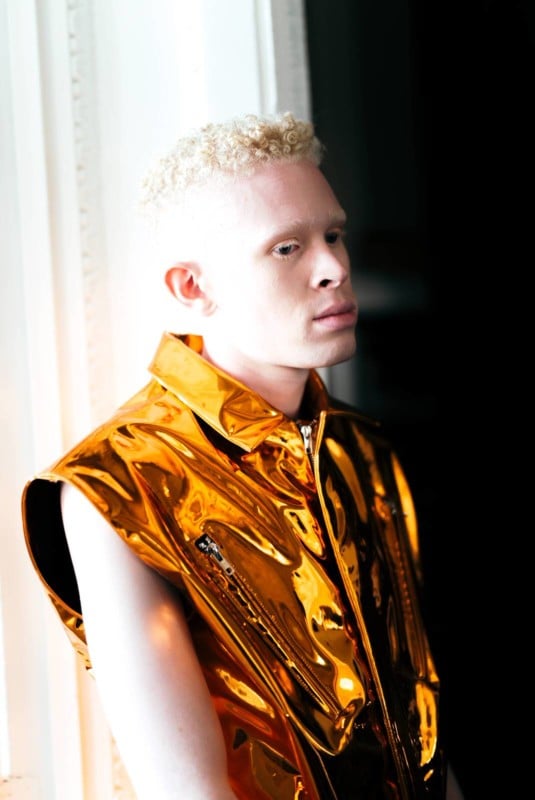 Recently I’ve made more of an effort to help people feel more at ease with my presence, and it’s really paid off in my images. Usually, when I arrive I’ll go around to the models and introduce myself with a smile, tell them I’ll be floating around taking photos, and that they can feel free to wave me away if they don’t want one taken at that time. By identifying myself, I become part of the scenery rather than just being the abstract idea of a photographer moving around the room.

I think that because the event does not end at the BTS – there is the actual show afterward – having these interactions early on means that it becomes easier to apply a storytelling approach to the editorial images as well. Interacting with the models in a showroom means you can nail images with more expression, and more precise poses than the other photographers in the room. 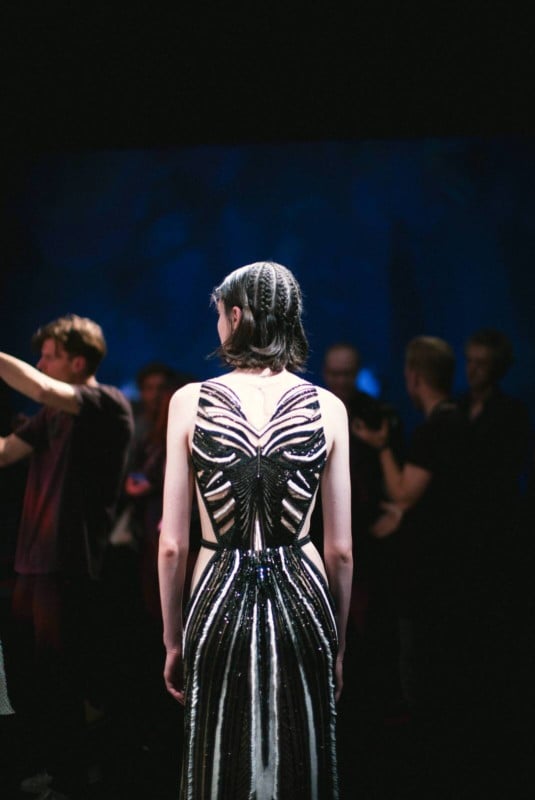 One of the best things about shooting this kind of environment is that there are so many different styles and approaches that can be used by different documentarians. I’ve seen videographers, podcasters recording audio, and even painters rendering these backstage scenes. Just because I approach things a certain way doesn’t mean that I won’t continue to explore different methodology to improve the way my images communicate. 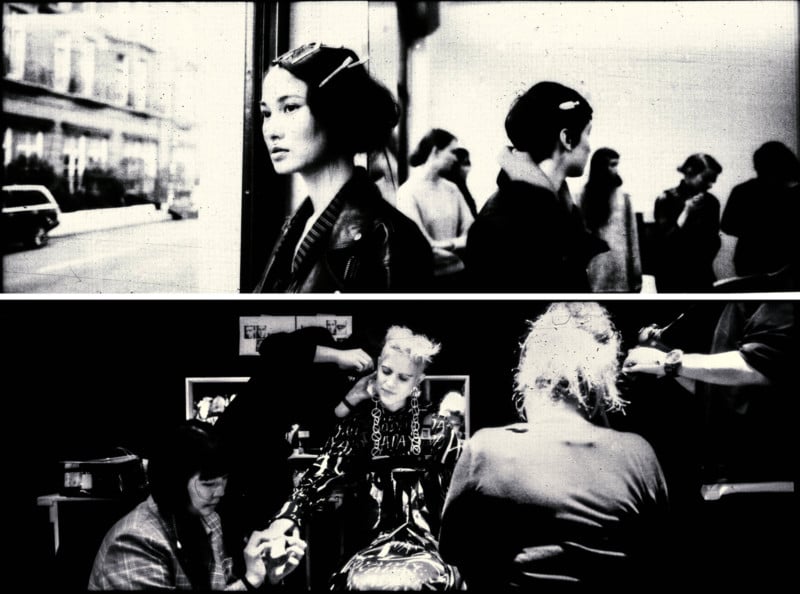 My recent BTS projects have all involved the use of my Hasselblad XPan and Ilford black and white film, which has given me some really unique results. I’ve even shot BTS for my own editorial shoots, including for the Toni & Guy Academy, which I found fun – switching between BTS and editorial as and when models were finished with the stylist. 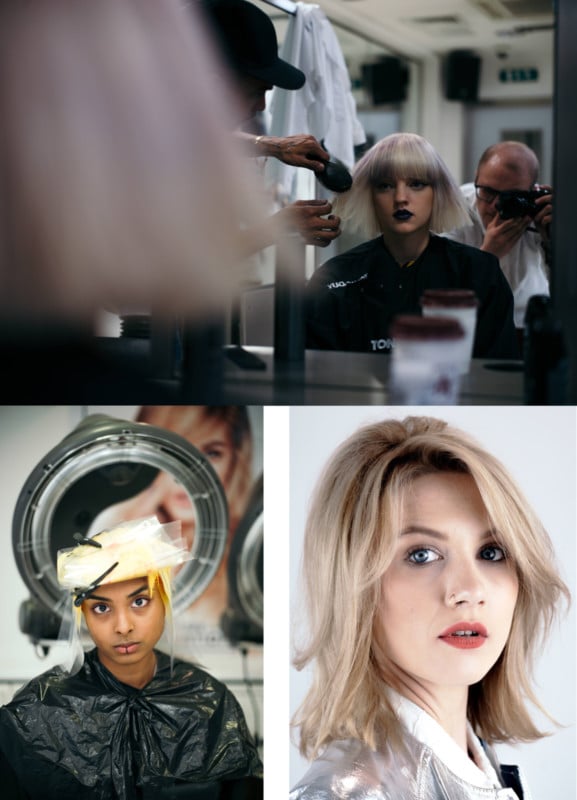 I look forward to seeing how my work continues to develop in this field and to sharing my future work with you! Thanks for taking the time to read my thoughts on shooting BTS for fashion events!

A Guide to Shooting Portraits with Kodak Ektar 100