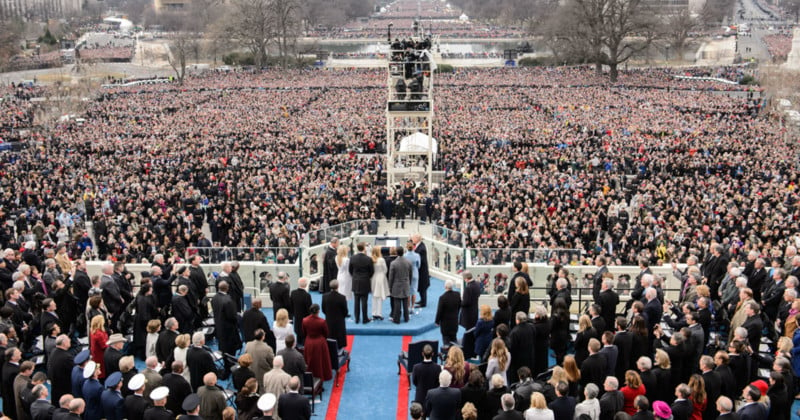 President Donald Trump personally intervened to have a government photographer edit official photos of his inauguration to make the crowd look bigger. That’s according to a new report published by The Guardian.

The newspaper submitted a Freedom of Information Act (FOIA) request and received a set of documents from the inspector general of the US interior department.

Those records reportedly reveal that Trump was angered by viral photos showing that his inauguration audience was smaller than President Barack Obama’s in 2009, despite the White House’s claims that Trump’s audience was the biggest ever.

Trump and then-White House press secretary Sean Spicer made phone calls to acting NPS director Michael Reynolds and NPS officials on January 21st, 2017, The Guardian reports, leading to a “scramble” within the National park Service for more flattering photos of the event.

In the report, an unnamed NPS communications official said “she got the impression that President Trump wanted to see pictures that appeared to depict more spectators in the crowd” and that the photos published up to that point showed “a lot of empty areas.”

An unnamed NPS photographer then went back into his photos from the inauguration and edited some of them by cropping out parts of the frame (he’s not accused of cloning or manipulating the photos in any other way).

The result of the new edit was that the photographer “selected a number of photos, based on his professional judgment, that concentrated on the area of the national mall where most of the crowd was standing.”

It’s unknown from the report which photos were edited and whether any of the edited images ended up being published, and the photographer’s second wave of crop edits was not mentioned in any earlier official reports because he had told investigators that cropping was his “standard artistic practice.”

The same day all of this occurred, Spicer held a now-famous press briefing in which he claimed: “This was the largest audience to ever witness an inauguration – period.”

Whether or not this type of cropping is ethical may be hotly debated among photographers, since shooting with a different focal length or moving to a different location could have produced similar or identical final results.

“[I]t only appears to be cropped tighter and cropping itself is an acceptable form of editing unless the intent is to deceive the viewer (like cropping a person out of a photo to make it appear as if they were not there),” NPPA General Counsel Mickey H. Osterreicher tells PetaPixel. “In this case, if the allegations are true, then Trump and his administration appear to have tried to get images that supported their statement that ‘This was the largest audience to ever witness an inauguration – period.’

“As a President who has constantly tried to undermine the press as ‘the enemy of the people’ and the purveyors of ‘fake news,’ I find it troubling that so much time, effort and attention was put into the ‘official’ photos, which in itself supports the need for a free and independent press – not handout photos or as many say ‘government propaganda.'”

Image credits: Header photo is an Official White House Photo by Greg E. Mathieson Sr. It is not one of the edited NPS photos related to this story.

This Guy Turned a Broken Camera Into a Working ‘Watch’ Camera