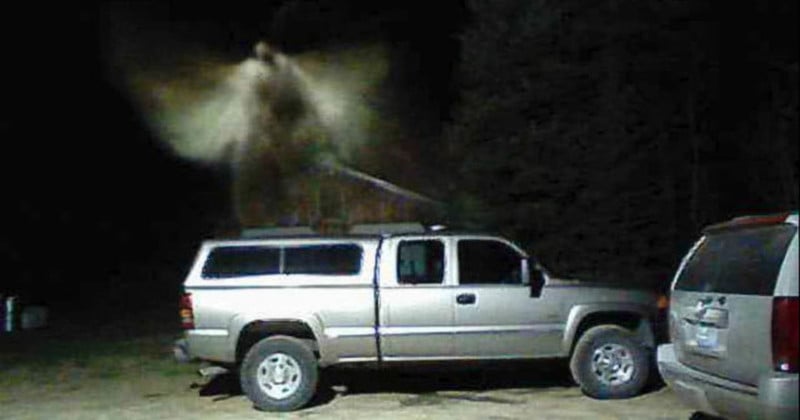 A Michigan man is receiving international attention this week after claiming that he has a photo showing an angel hovering over his truck at night.

WPBN reports that East Jordan, Michigan fire chief Glen Thomas received an email from his security camera last week after it was activated by its motion sensor.

Thorman says he couldn’t believe what he saw and immediately sent the photo to his pastor, Deneille Moes.

“I have a security camera that sits in my window and I have it set to take two pictures, back to back, a second or two apart,” Thorman says. “I had it going off after midnight that night and I didn’t check it then, but when I was eating lunch the next day I was thinking, ‘oh look, the camera took a couple of pictures last night’.

Moes, also believing that the photo was supernatural, shared the image on his church’s Facebook page, where it went viral.

“It was really clear to me the minute I looked at the photo, I just kind of freaked out a bit,” Moes tells WPBN. “I went like ‘Whoa! That’s an angel!’ And I texted him back, ‘That’s an angel.’ There wasn’t any doubt in my mind that we were looking at something supernatural.”

But not everyone is convinced in the miraculous nature of the picture. WBPN took the photos to a local professional photographer named Joe Clark, who believes it may simply show a moth.

“It is definitely moth-shaped in the first photo,” Clark tells WBPN. “You can kind of clearly see what looks, or could be interpreted as, wings and a head, but at the same time since it’s not clearly in focus and since it is what it is, there may be room for interpretation.”

The church disputes the moth explanation, saying that “being” had translucent wings, that the temperature at the time of the photo was likely around 39°F (~4°C), and that moths haven’t been seen in the area.

This is What Hawaii’s Volcano Eruption Looks Like From Space

How To Fix A Glitchy Liquify Brush in Photoshop On Windows