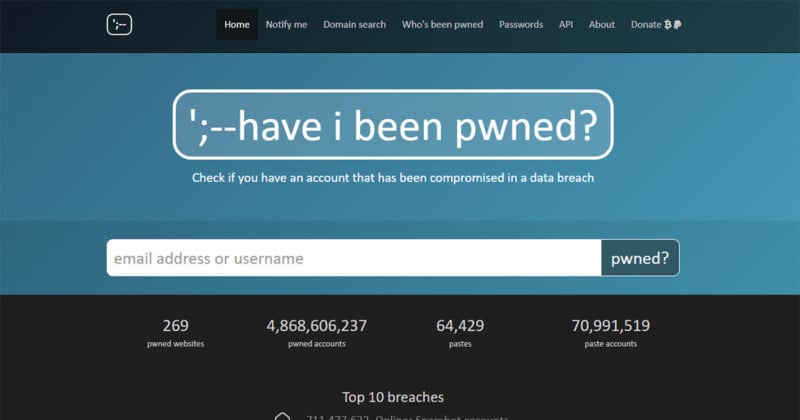 Here’s something that isn’t directly photography-related but is relevant to pretty much every photographer: if you’ve never heard of it before, you should check out the website Have I Been Pwned? It lets you search for your email addresses and passwords to see if any of your accounts have been compromised through security breaches.


The website was launched back in 2013 by Web security expert Troy Hunt, and its functionality is being adopted by major services in the industry (including 1Password). Nothing you enter into the search box is saved anywhere — it’s simply checked against the growing list of email addresses and passwords that have been leaked through major hacks.

There is currently data obtained from 269 compromised websites that have leaked over 4.8 billion user account details onto the Web. Among the compromised websites are photo-related and commonly used ones you will be familiar with (and some you likely use). Big names include Adobe, Snapchat, Imgur, Kickstarter, Comcast, Tumblr, and Dropbox.

We ran several emails to test the service and discovered breaches for every single one. For one email, the website revealed that an Adobe account used by PetaPixel was compromised and that the email and password were likely no longer secure.

In addition to looking up email addresses, there’s also a separate search form for looking up passwords. If you find that any passwords can be found in the giant list of half a billion passwords obtained from past breaches (the site will tell you how many time it appears), you should change that password immediately and never use it again.