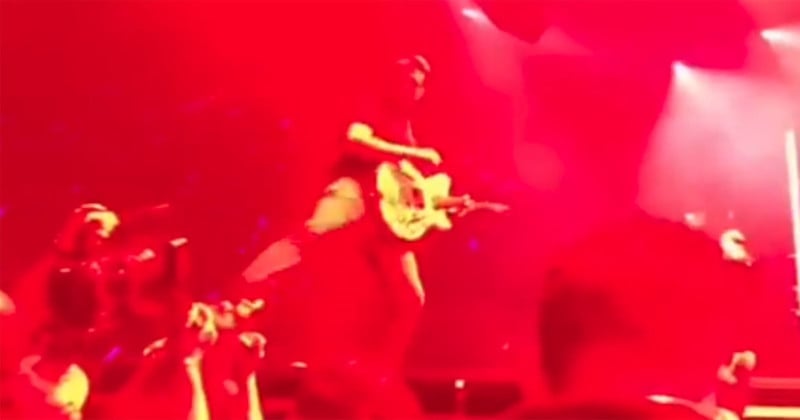 Queens of the Stone Age musician Josh Homme is at the center of controversy this week after he was caught on camera kicking a female photographer in the face in the middle of a concert in Los Angeles this weekend.


Photographer Chelsea Lauren was photographing the concert from the edge of the stage on Saturday night while Homme was performing a guitar solo. As Homme walked past Lauren, he kicked his leg out at her, smashing Lauren’s camera into her face and knocking her to the ground.

Lauren later shared a video of the incident on her Instagram account, writing: “I now get to spend my night in the ER. Seriously, WHO DOES THAT?”

“He looked straight at me, swung his leg back pretty hard and full-blown kicked me in the face. He continued performing, I was startled, I kind of stopped looking at him, I just got down and was holding my face because it hurt so badly.”

Lauren actually captured photos of Homme in the act of kicking her, which she shared on Instagram afterward along with an update on her status.

Thank you everyone that has reached out with supportive messages. A small update, as I'm being flooded with questions: My neck is a sore, my eyebrow bruised and I'm a bit nauseous. The doctor released me early in the morning. Here are three images. Two of them as Josh looked at me, smiled and then kicked me. The other one is later after he cut his own face with a knife. I was in the pit in tears – and he just stared at me smiling. Assault in any form is not okay, no matter what the reasoning. Alcohol and drugs are no excuse. I was where I was allowed to be, I was not breaking any rules. I was simply trying to do my job. I hold nobody accountable for this but Josh himself. KROQ has nothing to do with this and I will always support them. The irony is someone had thrown an ice cube on to the very slick catwalk before the QOTSA set. I was afraid that one of the band members might slip and hurt themselves so, when the lights went dark, I used my arm to wipe down the runway so nobody would hurt themselves. Thank you to @variety for their immediate concern and care with this matter. As of now, nobody from QOTSA has reached out to me. #queensofthestoneage #QOTSA #JoshHomme

After the video and photos spread online, the 44-year-old Homme issued an apology to Lauren through the Queens of the Stone Age Twitter account. Homme claims that the kick was accidental and that he was simply trying to kick over the lighting and equipment that was on the stage. 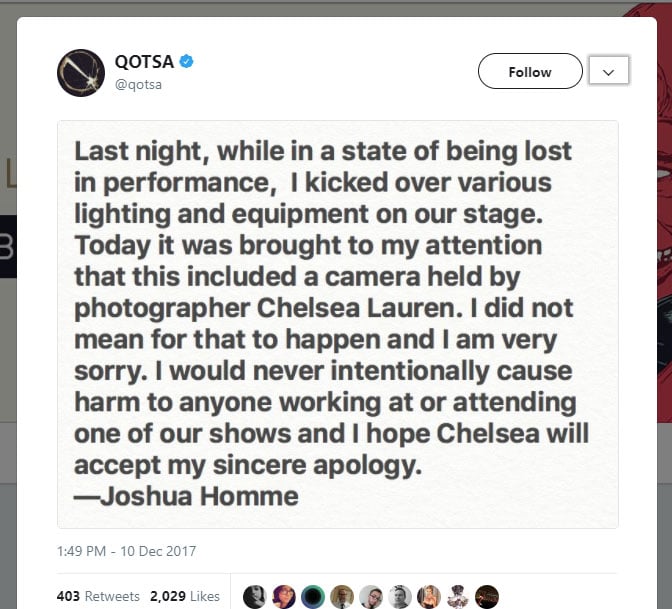 When that “apology” didn’t go over well, Homme tried again in a new emotional video apology on YouTube.

“I’d just like to apologize to Chelsea Lauren,” Homme says. “I don’t have any excuse or reason to justify what I did. I’m truly sorry and I hope you’re okay. I’ve made a lot of mistakes in my life, and last night was definitely one of them.”

Update: Photographer Tanya Voltchanskaya writes that she received a warning from Queens of the Stone Age back in 2014 that photographers must not stand in front of Homme during a show, and that those who do “will get a boot in the face.” 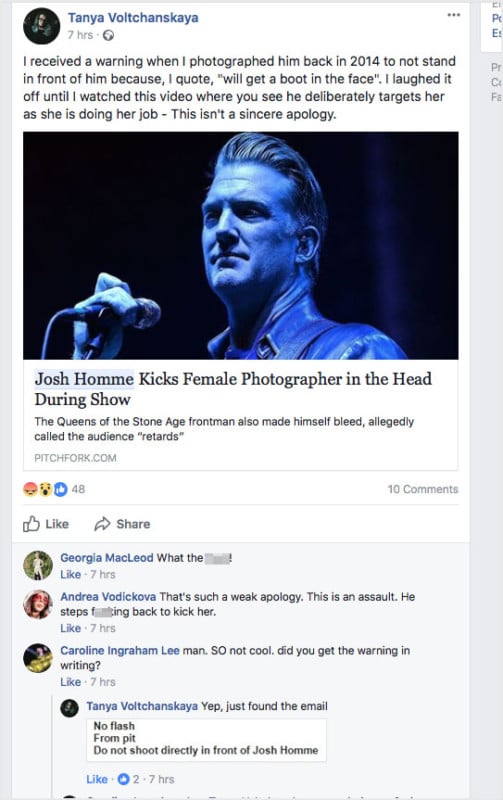 Update: Here’s the longer video of the incident, published by Consequence of Sound: