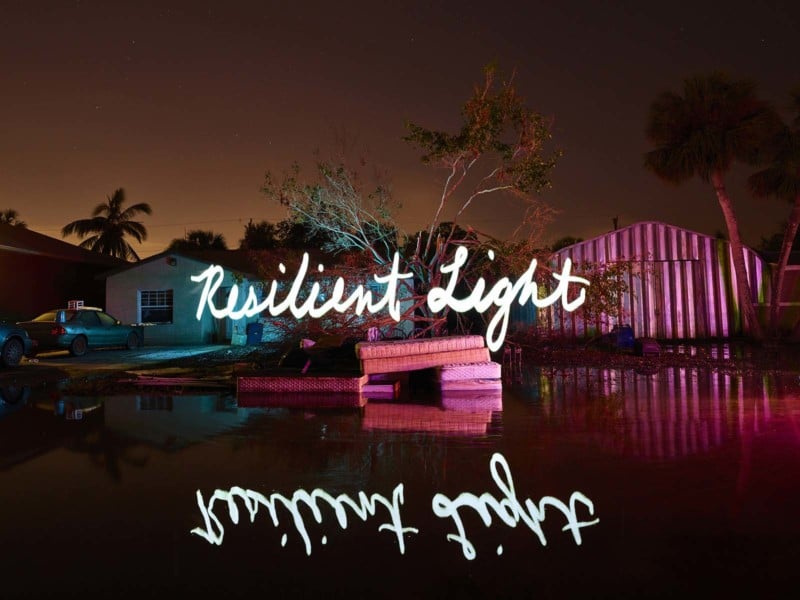 When the devastating hurricanes started hitting the United States recently, celebrity photographer Jeremy Cowart wanted to do something but had no idea what to do.

“Finally I started dreaming/wondering about this thought: is it possible to turn scenes of devastation into a vessel to help the devastated? That began the process of figuring this out…” explains Cowart.

“I kept wanting to play with the word light because that’s what these people are… they’re light in the darkness,” he continues. “And I planned on shooting everything at night too, so the word light worked both literally and figuratively. And then the word resilient just made sense because that describes the grit of the people.”

And that’s how Cowart’s new project, Resilient Light, was born!

Devastation is depressing and doesn’t usually go together with bright, cheery colors. But that was the goal — to show some strange contrast and to photograph devastating scenes in a way that maybe hasn’t been done before. It’s a message of hope. The vibrancy, the saturation — it all represents the people and the ongoing hope they have. 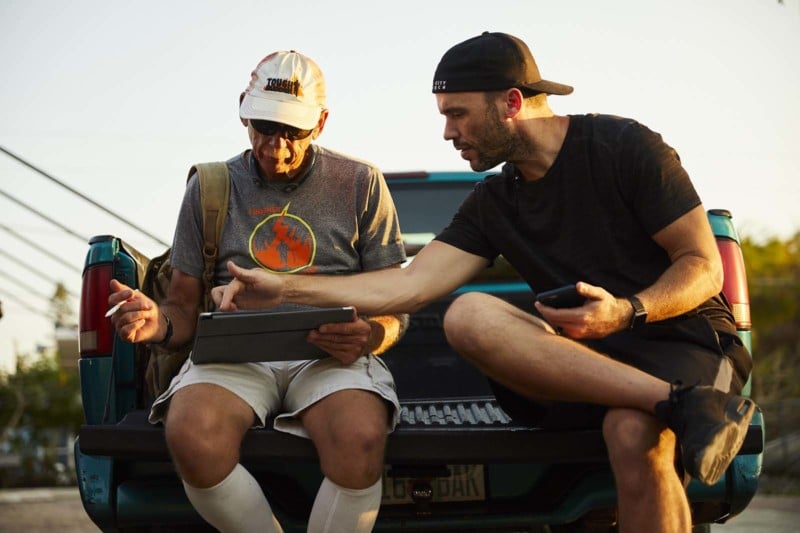 Cowart had worked with words within his images before when in his Voices of Haiti photo essay, he let the survivors of the earthquake write their own message on found rubble. In Resilient Light, he decided to give the words more prominence than before.

“A few of them are quotes directly from the victims,” says Cowart. “But not everyone had messages to share, so I collaborated with a bunch of writer friends to pitch in thoughts and phrases that are inspired by the people.”

It ended up being a big creative collaboration between Cowart, the victims, and his creative writer friends. The goal of it all was to sell prints so that they can give 100% of the print sales back to the communities that were devastated.

“I guess it’s a form of storytelling, journalism, and art all mixed together,” says Cowart. “I want to literally help in times of need through photography and art. Yes, a photo ‘is worth a thousand words,’ but I’m not sure a photo without words can help as much as a photo with a story attached.” 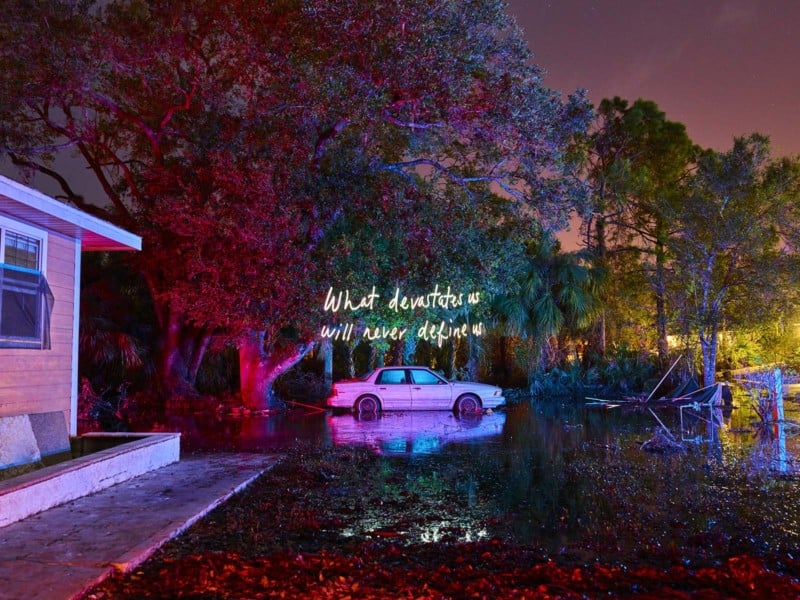 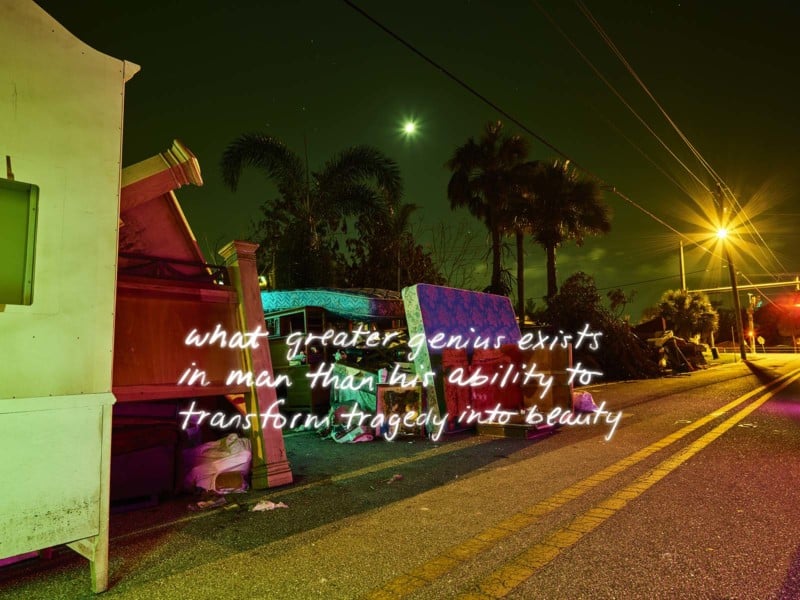 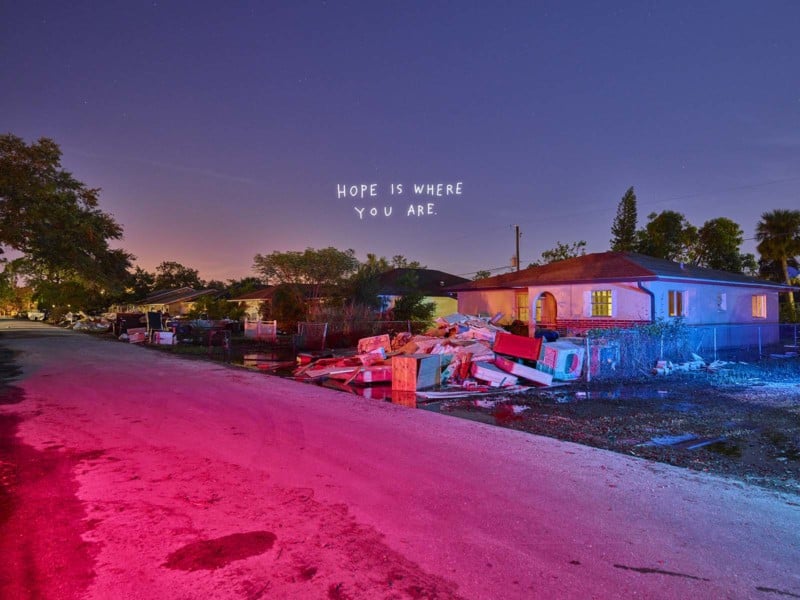 The words could have been easily superimposed in Photoshop on returning home. However, Cowart decided to create them there and then at the scene and directly in the camera. He had worked with the pixelstick before and decided to go with the light-painting device to create the words.

“The pixelstick is tricky, and you have to really nail the timing or do it over and over again to get it right,” elaborates Cowart. “Handwriting works well though cause it’s meant to be imperfect and the pixel stick is always imperfect.”

There’s something powerful about getting it all in camera and about capturing the literal reflections of hope off of the water. Some of the victims actually wrote their quotes on the iPad Pro, in their own handwriting and then they were projected using the pixelstick.

Profoto B1 strobes with color gels attached provided the bright colors. Three to four assistants all standing around lit the scenes with strobes on 20-30 second exposures. 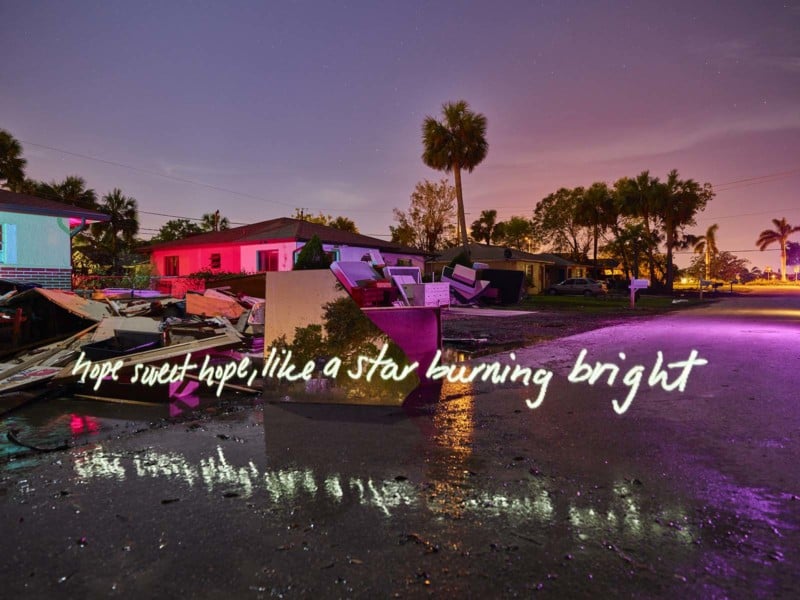 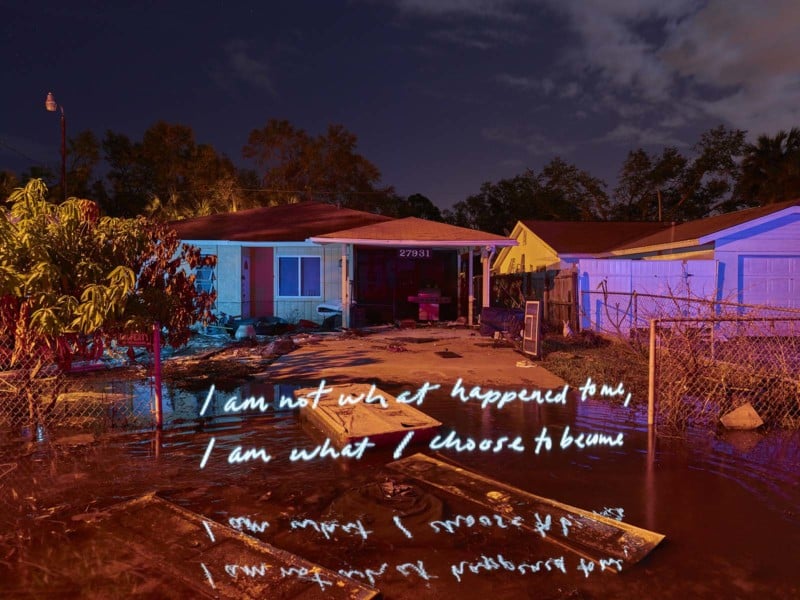 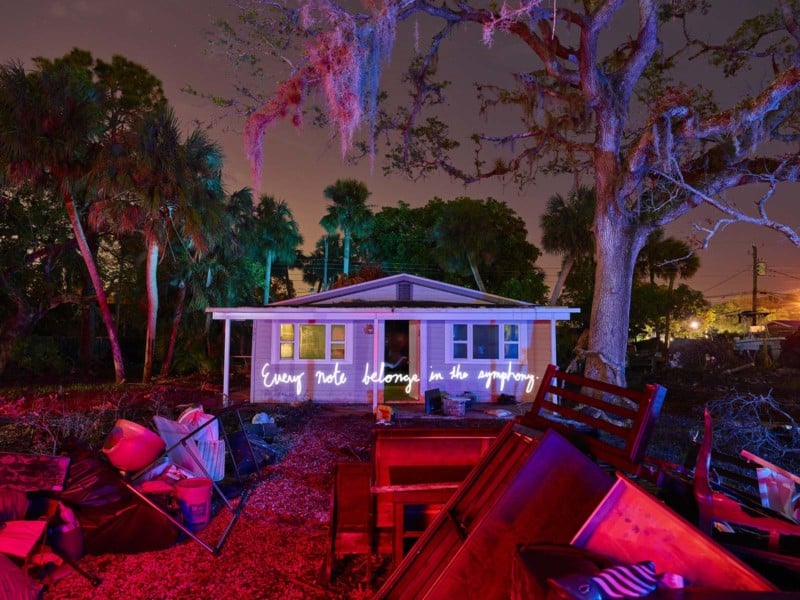 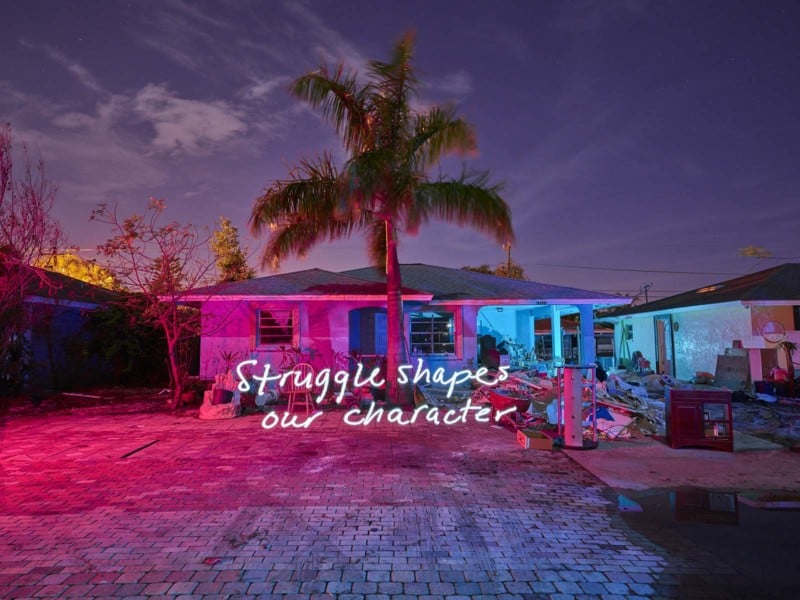 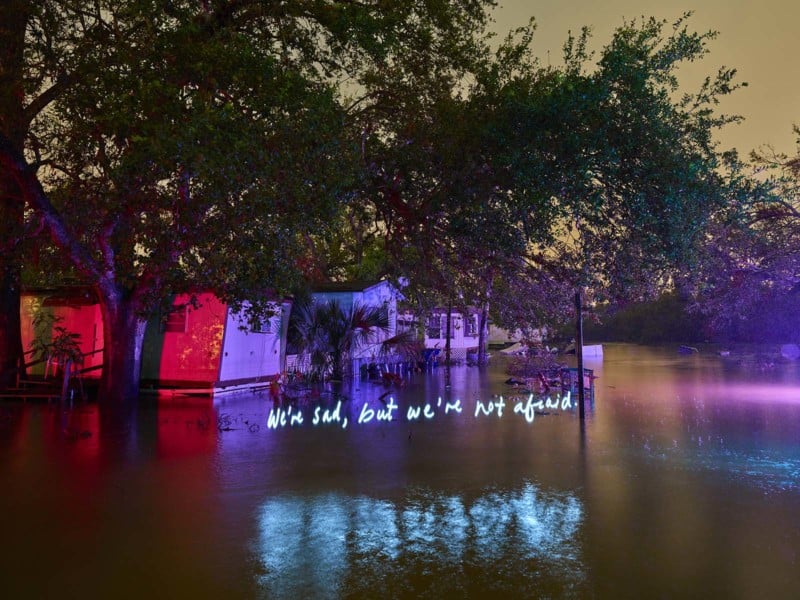 The project was underway from September 27 through October 2 with only five nights of shooting in Bonita Springs, Florida, below Fort Myers on the west coast of Florida. Each image took an hour to capture on average. The first night was testing and the 2nd night was mostly failed attempts, so on nights 3-5 the team of six had to hustle.

They worked from about 8 pm to 2 am each night. The crew had to move away from streetlights because they would flood the long 30-second exposures with too much light, so they were forced to work in the pitch-black night. Although the scenes in the photos look bright, the actual location was extremely dark when the images were made. 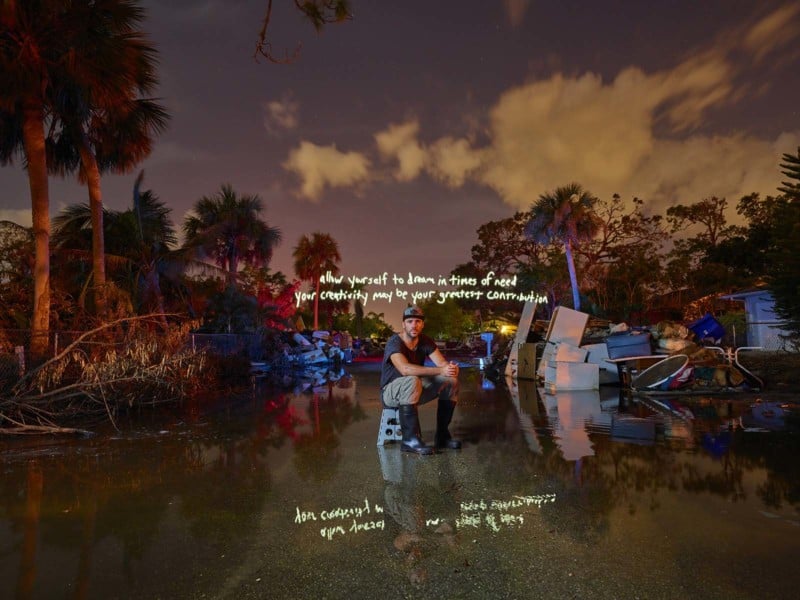 WHCC (White House Custom Colour) and ShootProof are both providing discounted printing for the 24 images in this series. The smallest print is 11×14″ for $20 and largest at 30×50” at $150 (though the prices are subject to change). You can purchase your own prints here.

“Sometimes we feel like we can’t do anything to help but that can’t be further from the truth,” says Cowart. “There’s always something we can do to help.”

Image credits:  All photos © Jeremy Cowart and used with permission