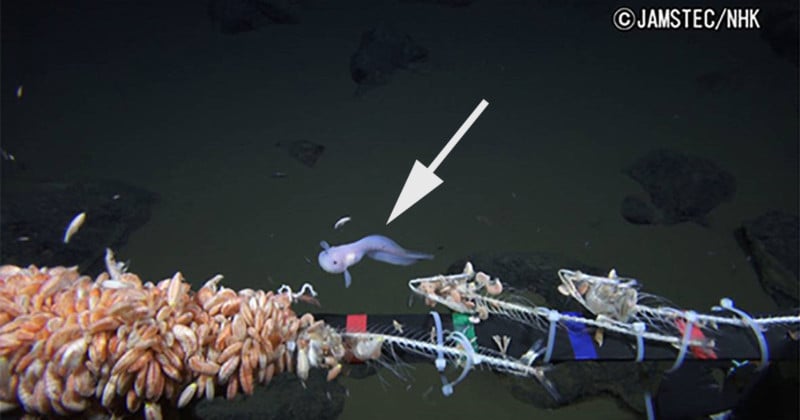 Japanese researchers have released photos and videos of the deepest fish ever captured on camera. The snailfish was found in the Mariana Trench at a depth of 8,178m (~5.08 miles) and filmed with 4K cameras.

The Japan Agency for Marine-Earth Science and Technology (JAMSTEC) writes that this record-breaking footage beats the previous mark of 8,152m by 26m (~85.3ft)

Here’s some of the footage the scientists recorded (at 1080p):

The 4K video cameras were installed on a newly-designed unmanned camera trap that’s sent to the ocean’s depths. Mackerel was placed in front of the lander frame, attracting the deep-sea organisms seen in the footage.

It took 17 hours and 37 minutes of waiting before the first snailfish appeared on the scene at a depth of 8,178m.

“Deep-sea organisms and their ecosystems have attracted great scientific interest; however, extremely high pressure in deep-sea trenches has prevented sampling as well as video recordings,” JAMSTEC writes. “The research team will continue investigations of hadal organisms, attempting to collect samples for analyses to better understand the population density of the organisms and the food chain at water depths below 8,000 m.”

Photos and Color Profiles: The Quickly Approaching Move to Wide-Gamut