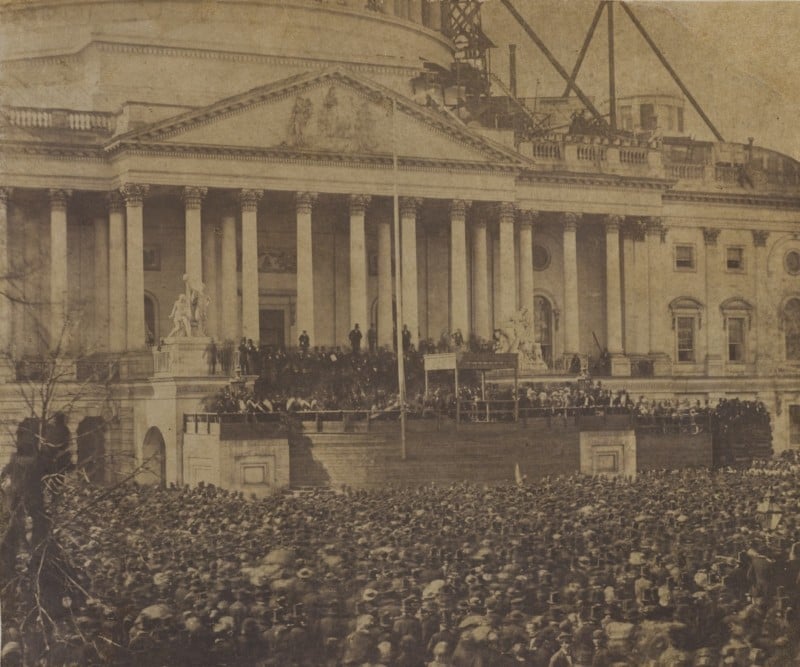 This historic photograph was captured in 1861, on a day when the United States teetered on the brink of Civil War and Abraham Lincoln was being sworn in as the country’s 16th president. And yesterday, one of the few prints of the photo in existence sold for a whopping $27,500.

The inauguration where this photograph was captured was tense, with sharpshooters positioned on the roof and in the windows of the Capitol to ensure the new president would remain president for longer than a day. It’s here that Lincoln addressed a divided nation, reminding those in attendance that “We are not enemies, but friends. We must not be enemies.”

Most likely taken by Alexander Gardner, the photograph—an old salt print that measures 10 1/8 x 12 3/8 inches—was auctioned off by Sotheby’s yesterday… and the auction house is not being bashful about the picture’s value. They’ve dubbed it “a landmark in the history of photography and among the most impressive examples of early documentary photography.”

Adding to its value is the fact that this print is also exceptionally rare. “Extant prints of this historic image are scarce,” writes Sotheby’s. “At the time of this writing, it is believed that no other early print of this image has been offered at auction.” In fact, the auction house could only identify three other similar prints in existence.

At $27,500 this little piece of photographic history didn’t go cheap, but the proud new owner of the print probably won’t see another one like it at auction in their lifetime.

Quick Tip: You Can Use an Old Phone’s LCD Screen as a Polarizing Filter