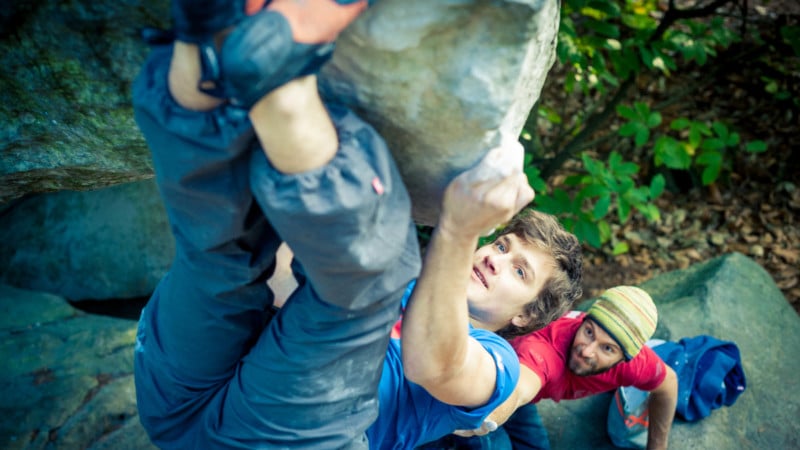 Shooting sports can be an extremely challenging experience: translating the intense action you see in front of your lens into awesome imagery isn’t easy. Here are my six tips you can apply right away! First and foremost, in my opinion, the exact pose you capture an athlete in is the major determining factor of whether or not an image will convey the intensity of the movement. It’s unfortunately very easy to make a top athlete look absolutely silly if you just shoot a photo of them at the wrong moment.

The human body is an amazingly dynamic machine, and just minor changes in the angles of limbs or features of the face can make a huge difference. For instance, in the case of shooting running, the moment both legs are right under the upper body tends to look quite dull. On the other hand, when both legs are fully extended to the front and back, a much more athletic pose is acquired. Be aware of this when culling your shots down and picking the best photos.

In general, you’ll also want to make sure all of the athlete’s hands and feet are in the frame if you’re shooting a full body photo. Also, I love for the face to be visible. This isn’t a strict rule of course, but the intensity an athlete’s expression can display is just amazing. If you manage to capture the optimal pose of the athlete’s body and also have their face visible in the photo, you’re well on your way to shooting an awesome photo. 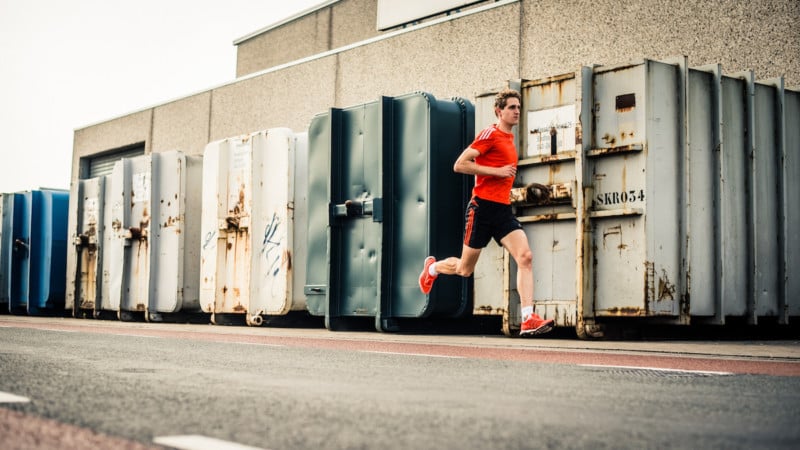 Use Motor Drive and Enlist the Athlete’s Help

Now, unless you have some Jedi sixth sense going on, shooting a photo of an athlete at the exact moment their body is in the optimal position will be near impossible, which is why camera companies invented motor drive.

I’m going out on a limb and estimate here, but I think your camera will need to be able to shoot at least about 5 or 6 frames per second to make it easy to grab the right moment. Of course, you can always luck out with a camera that doesn’t shoot as fast as that, but if you only have one chance to shoot a particular moment of action, it’s always best be on the safe side.

Next up is choosing the best frame from your burst of photos. Having a good understanding of the sport you’re shooting is a great help here. When I’m shooting a sport I have never shot before, I tend to send my shots over to the athlete and just ask them to tell me which poses work best. The athletes know their sport inside and out, and are often well-aware of both the clichés and the winning poses. 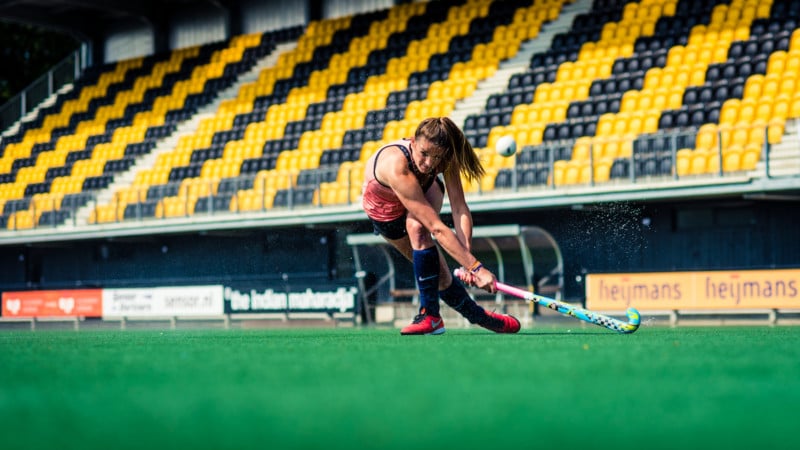 So you’ve practiced shooting the right pose and picking the best moment from a burst of photos. One way to really elevate your sports photos now is to think about the story you’re trying to tell. This can be a major story at a macro level—like a rivalry between two players or teams, or a team that has a chance of winning a national title after a ten year run without success—but I think it’s also crucial to always look for tiny stories in the moment.

For instance, in sports that involve a ball of some sort, it can be great to include this in the frame. You’ll be able to show a relation between the player and the ball, and having the ball present can help enormously in motivating and explaining the player’s pose. In other sports, like climbing, it’s nice to be able to see where the athlete is going and maybe even capture the athlete looking at the next hold.

You’re telling a mini story: the athlete is currently in a particular position and their goal is to reach for the next hold. 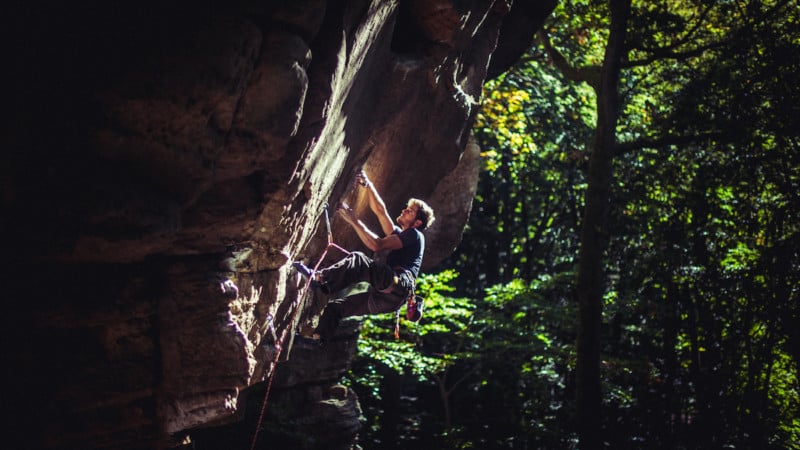 Whenever I’m shooting sports, the first thing I pay attention to is the light. This can really make or break your photos. Naturally, if you’re shooting using the available light, there’s only so much you can change about the light. Shooting outdoors on overcast days results in evenly lit subjects, which is in my opinion easy, but can look a bit boring. Directional light, on the other hand, can really make your photos more exciting, but is often difficult to tame.

Try using it as a sidelight for your subject, or even as a backlight. Indoors, look for light spots that are pointed at the athletes. Try changing your position in relation to these lights and see what gives you the most exciting results. 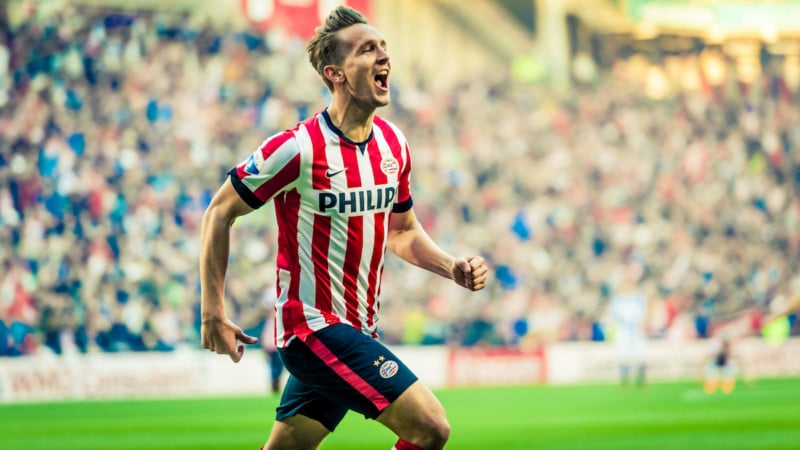 Shoot from Slightly Below the Athlete

In general, shooting from below the athlete’s eye level will make him or her look more impressive. Most of the time you don’t want to be looking down on your subject, it will make them seem insignificant. Even when shooting at eye level, most of the athlete’s body will be looked down upon by the photographer, an effect that I feel is noticeable if only ever so slightly.

There are loads of exceptions of course. In climbing, the last thing you’ll want to do is shoot from below, since you’ll end up with the loathed butt shot. Shooting from above the athlete will allow you to both see his face and get a feeling for the depth that is below the climber. In all sports, it can be great to show a wider view of the athlete in an environment, and in that case having an elevated position may work well.

When shooting close up action though, consider picking a slightly lower viewpoint. 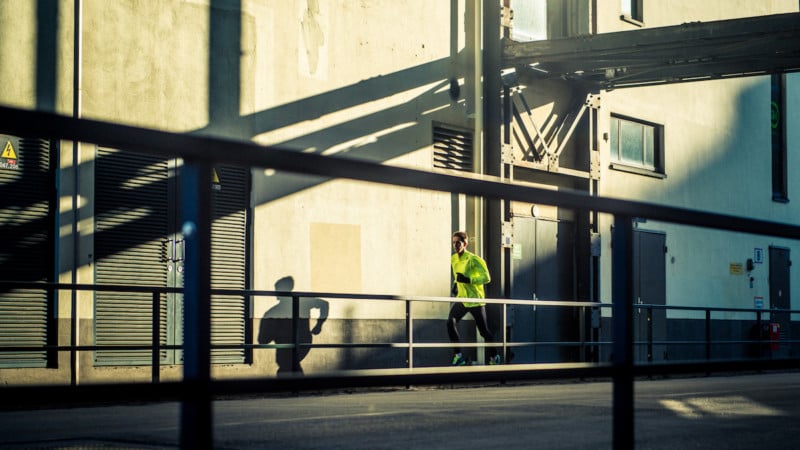 One major pet peeve of mine is the way sports photos are often treated as journalism. If they’re being used for news articles that’s just fine of course, but I really feel photographers are missing out on a major chance to convey the intensity and feeling of the athletic feat by not allowing themselves some freedom in post-processing.

I’m not suggesting you do extensive Photoshop wizardry on sports photos, but I’d definitely recommend using some global adjustments that will alter the mood of the photo a bit. Consider tweaking the white balance and see what toning the image can accomplish.

I like to approach moments in sports not as some sort of fact that happened, but a moment of emotion and intensity. If changing the toning of the image can help me convey that feeling to the viewer then I’m happy to use it.

Editing Trick: How to Perfectly Align Anything in Photoshop

Timelapse Shows 1 Year on Earth from 1 Million Miles Away