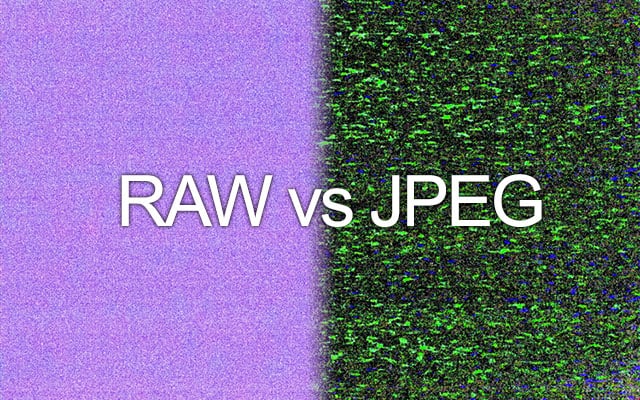 When starting out in photography, a lot of beginners are confused about RAW and JPEG formats while shooting. There are plenty of explanations out there, but with us being photographers, it’s easier for us to comprehend a visual reference.

I’ve had the option of shooting RAW since my Canon 20D over 10 years ago and even though I’ve never shot JPEG since then, I never actually compared a RAW with JPEG to see the data I would’ve been losing if I let the camera compress the files itself.

So I decided to do an extreme test: I used a Canon 70D to shoot a photo of a pure black image. I did this by not having a lens on the camera at all and just taking a shot with the lens cap on. I had my camera set to RAW+JPEG so I got the image in both formats directly from the camera. I shot these at 1/60s with the ISO at 3200 and at first glance, they are both identical and pure black:

Using Adobe’s Camera RAW editor, I bumped the exposure up 5 stops for both files and was amazed at what both images actually looked like.

Here are both images, side by side and cropped:

As you can clearly see, the two look nothing alike — it’s almost impossible to guess that they started as the same image. This is something to consider if you’re a JPEG shooter. Your shadows can look relatively inconsistent and discolored if you need to do extra processing. On the opposite end, RAW has a very uniform noise across the whole spectrum.

I’ll admit neither look too pretty, but these are extreme cases of pushing the limits of the shadows in an image and its worth acknowledging for anyone who takes their craft seriously. If you have the capability with your camera and don’t want your photo looking like the swamp thing, do yourself a favor and shoot RAW!

About the author: Austin Paz is a photographer and traveler based in New York City. You can find more of his work and writing on his website and Instagram. This article was also published here.