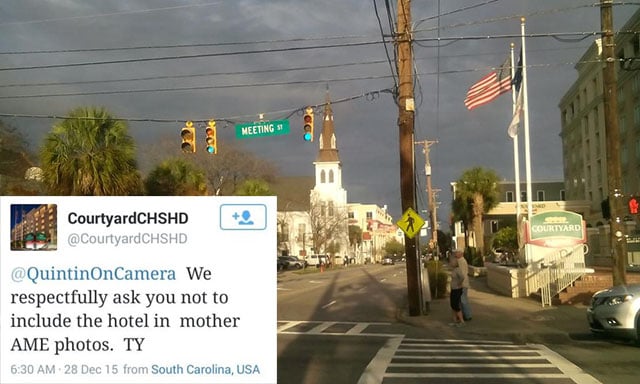 The manager of the Marriott Courtyard hotel in Charleston, South Carolina, is apologizing today for a request that the hotel not be included in photos of Emanuel AME Church, the site of a mass shooting that killed 9 back on June 17th, 2015.

It all started this past Sunday when a man named Quintin Washington posted a photo of the church on Twitter. He included the caption “The Mother Emanuel Way Memorial District on a warm, Sunday afternoon in December,” and the Courtyard sign can be seen in the foreground:

After seeing his photo, the hotel’s official Twitter account publicly Tweeted at Washington, saying: “We respectfully ask you not to include the hotel in mother AME photos. TY.” 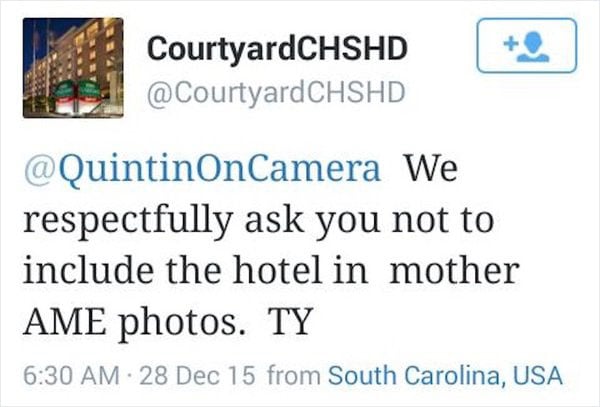 Washington then Tweeted a screenshot of the request, sparking a huge outcry against the hotel and becoming a textbook example of the Streisand effect.

I don't see anything wrong with this photo, Courtyard Marriott. You guys are a part of Mother Emanuel Way. #chsnews pic.twitter.com/RyNPrBCgn6

@CourtyardCHSHD @QuintinOnCamera Saying "respectfully" doesn't make your request respectful. It's not a prison. It's a church. @Marriott

@CourtyardCHSHD Please control the light reflected from your building and keep it out of photographers' lenses. https://t.co/lZ091HVZiD

Wow check out the amazing photos of @CourtyardCHSHD with Mother Emanuel in the background. @QuintinOnCamera #Google pic.twitter.com/DF82n9a4Cv

After the story was quickly picked up by a number of media outlets, the hotel deleted the Tweet and started apologizing profusely to Washington:

I and Chris Drummond just got off a conference call with the hotel's PR firm. They "sincerely apologize" for the hotel associate's tweet.

Peter Hoffman, VP of Operations for Interstate, which represents @CourtyardCHSHD, said to me about the incident: "simply wrong." #chsnews

The Post and Courier reports that the hotel company says the staff at the Courtyard “mishandled the situation,” and that they’re taking steps to “prevent this mistake from happening in the future.”

Dickey Chapelle: The Life and Work of the Legendary Female War Photographer

‘The Lost Rolls’: A Photojournalist Revisits 200+ Rolls of Undeveloped Film