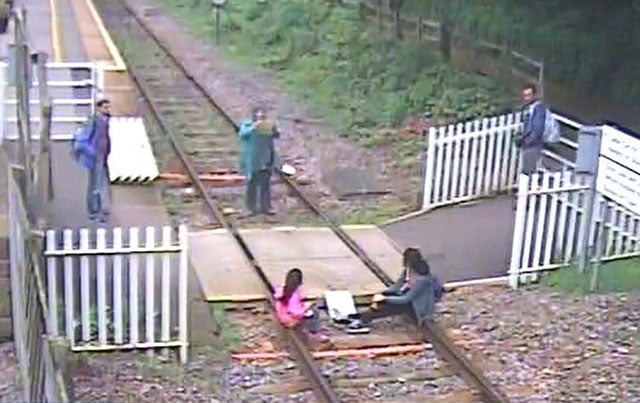 Network Rail published a warning this week about the dangers of taking photos on railroad tracks. The company, which operates most of the rail network in England, Scotland, and Wales, also released a surveillance video that shows multiple dangerous photo incidents at a rail crossing that happened on in one day.

Warning as crossing users take selfies and sit on the tracks in Derbyshire #StaySafe https://t.co/etO2ltHTAm pic.twitter.com/qGWDNkLw0s

The camera was pointed at a rural railway crossing in Derbyshire where pedestrians walk across the tracks. Some parents took selfies with their kids on the tracks. One group of 10 people — including a toddler — was seen lingering for 8 minutes on the tracks while posing for pictures.

“Level crossings in rural, picturesque settings such as Matlock may look like good opportunities for a photo but the railway is not a playground,” says Network Rail operations risk adviser Martin Brown. “Trains can come from either direction at any time and being distracted by chatting, texting or taking photographs while using the crossing significantly increases the risk of an incident.” Network Rail says that there are about 6,100 level crossings in the UK, and that they were built in a time when there were fewer trains and when they operated at slower speeds. “If the railway was being built now, level crossings would not be used,” the company says. 900 of the crossings have been closed in the past 5 years.

This is the First GoPro Camera Drone Video