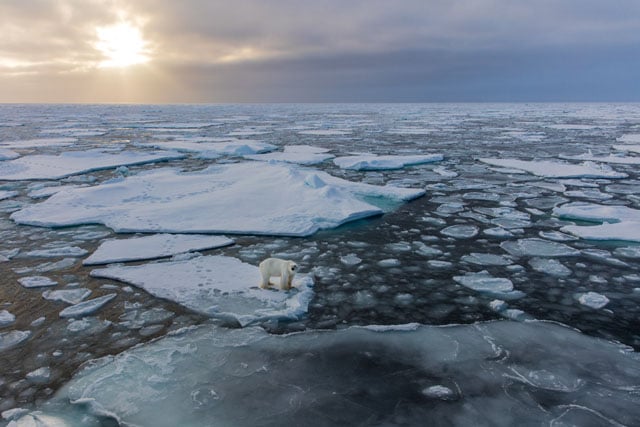 In 1958, Disney released the documentary White Wilderness. You’ve probably never heard of it, but you likely have heard the myth that lemmings commit mass suicide. The truth is more complex: the narrator didn’t actually say the lemmings were committing suicide, and in 1982, a CBC TV show revealed that the scenes weren’t shot where the film said they were and the lemmings were pushed over the edge by the crew. What you saw on-screen was fiction, but, if it weren’t for this film, would you have heard of a lemming?

At it’s heart, photography is about visual storytelling. We hope that our images are used with words that accurately represent the story we experienced while shooting, but that’s not always possible. Even BBC, in 2011’s fantastic Frozen Planet, used footage of a polar bear tending her newborn cubs in a den that was shot in a zoo inter-cut with Arctic footage without narration that says “this den footage is from a zoo” (They had a behind the scenes clip that showed how the den shots were filmed). The overall story they were telling is true and accurate and the den footage supported it, but it shows how story is king, especially when making nature relatable to the average person. 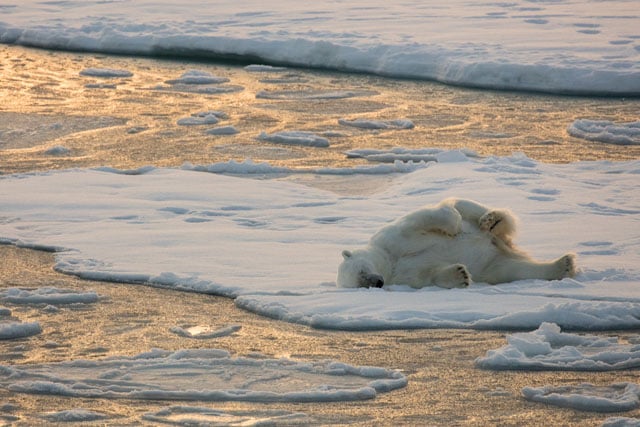 Pure truth rarely makes for a good story, and it can easily be distorted. Seven hundred thrilled passengers reached New York after the Titanic’s maiden voyage is truthful but not the real story. Instead, authenticity is key. The Hall of Presidents at Disneyland isn’t truthful–these presidents were never all in the same room—but it’s authentic. We see authenticity over pure truth for story’s sake all the time in the news, documentaries, and more. It’s totally fine. It’s when you have neither but it’s billed as truth that’s the most frustrating.

I recently had an experience in which the story my photos were in was not only completely different than real life, but scientifically wrong. It’s a bit funny, and I wanted to provide you this behind the scenes view into the media. 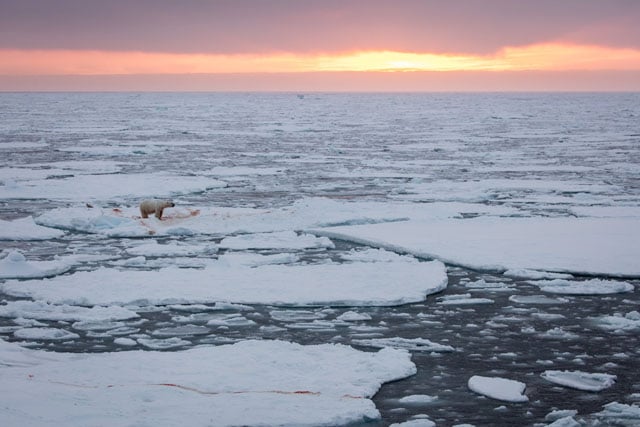 To start, I just recently returned from an amazing trip to the Arctic with a small group of photographers. One of our encounters involved 4 bears total over about 20 hours with a fresh kill in the ice at the edge of the north pole, around 82°N. I wrote up a fun little blog post about it titled “A Polar Bear Crime Scene” (warning: there’s blood and guts in some photos).

I embellished a little. For example, we saw the two bears first, not a trail of blood. The trail of blood shot happened after we had been with the bears for hours. And I don’t think the bear really came to us looking for help: he wasn’t allowed to eat, and he wanted to see who we were. The key element was sharing a neat encounter with everyone and a tiny environmental message at the end. 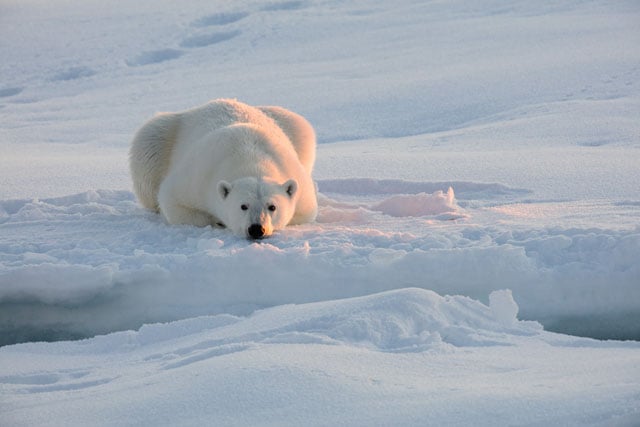 The heart of that message is: our last full bear population count is about 20 years old, they’re long-lived, which makes the data hard to interpret, and there’s no comprehensive, long-term study. Basically, we don’t know what’s up with their population. It’s quite likely that in 50 years, the only place you’ll find them due to global warming is in Canada/Greenland. (Of course, there are some bears who live/hunt in places like Svalbard’s fjords, so perhaps even that prediction is wrong.)

What is true is that Canada, Greenland, and the US allow for polar bear hunting, and Canada allows trophy hunting by foreigners. Their government even pays the hunters for the fur, and there’s a growing market in China for that fur. Global warming is abstract. Helping to stop bear hunting is actionable and immediate, and it makes sense not to kill them since we don’t truly know what’s up with their population. Play it safe. It’s sort of like if people thought the dodo bird might be going away but kept killing them anyway since they didn’t know for sure. 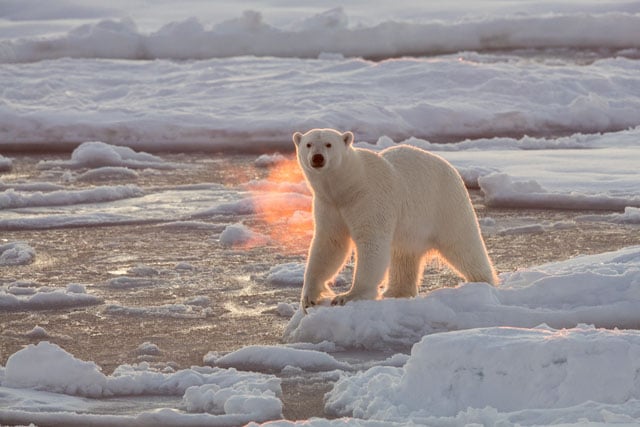 There’s a wire agency I work with to try and get some of my images and the stories behind them to various papers. They loved the blog post and images but thought the ones with seal blood (nearly all of them) were too graphic for the average person. They wrote up a G-rated story that was unintentionally flat out wrong (more wrong than what was published) and sent it to me for approval. Here’s how I replied:

Hmm, that’s not at all accurate to how the bears live unfortunately. What you might focus on is how the bears travel on the ice, and while they can swim a bit, they use the ice to hunt and live. When there’s no ice and they get stranded on land, they don’t eat/can’t hunt until the ice returns (or at best ravage eggs from a bird colony which barely gives them a snack but destroys the colony: I have pics of this I can provide). That’s especially hard on mother bears that come to land to build a den/have their cubs. This bear’s come to the edge of the ice, and he can walk no further. As the polar ice recedes, he’s losing his home. In a few years, it’s likely he’ll disappear completely from this part of the world (Svalbard) and only be in Canada/parts of Greenland. (FYI not all bears are ice roaming: scientists have found some bears in Svalbard live and hunt around the fjords, but most bears need the ice to live.)

Simplified, G-rated, stretching slightly for the story, but still correct enough I’d be comfortable with it out there with my shots. (You can bicker over what “a bit” means, for example, but they need the ice: they can’t swim forever.)

Then the Daily Mail published their article on this story, titled “The Loneliest Bear in the World,” and the agency emailed me that it was up.

It’s great to see your work out there, and I was happy to see my images featured so well! I read the story and wrote back that it was “more fiction than fact” and if they “think anyone else might run it, it’d be great to correct the text before they do. It’s so scientifically wrong it’s a bit embarrassing” but “hey, exposure is good.”

Frankly the photographic market is tough, and I’d rather get some exposure and have to do some fact-fixing after than not get the exposure.

I posted a comment on the original story directing people how to find what I wrote originally. I asked friends on Twitter/Facebook to up vote the comment and the story took off a bit, with some people thinking Daily Mail had stolen my photos, removed the watermark, and posted fiction. They were looking out for me, and I really appreciate that. 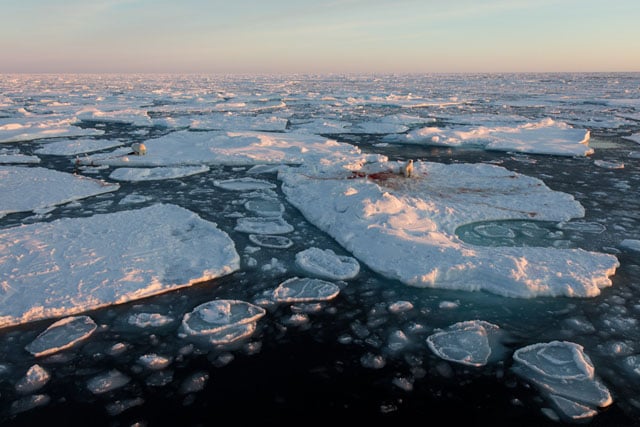 The Daily Mail did have permission to use the photos via the agency — I expect to be paid for it (although they haven’t given me rates or said when to expect any payment, which has me nervous) — and they did not remove any watermarks. The agency also notified me that they’re trying to get the photo credit updated, as I own the copyright (and the images are registered).

At the end of the day, my feeling is that I don’t know if it was the wire agency or the Daily Mail who crafted the story, but I’m very glad to have the exposure and to share some amazing images. After all, photography is about visual storytelling, even if the story someone else tells isn’t quite what you’d tell. If my images motivate one person to act differently or get one kid interested in polar bears, even with the fictional story, then I’m happy.

About the author: Josh Anon is a freelance photographer based in San Francisco, California. He has been shooting nature photos for almost 20 years. He is currently the co-founder and CEO of the feature film development company, Visioneer Studios. You can find more of his work on his website.

Image credits: Photographs by Josh Anon and used with permission