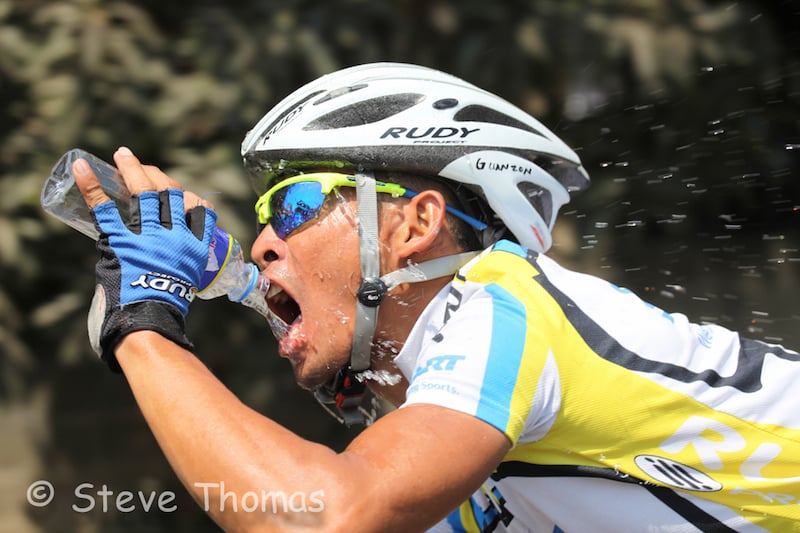 Life as a race photographer can be a tough and risky one. Add in a little eastern spice and it has a whole different taste. Steve Thomas takes us on a back seat ride through the pelotons of Asia.

You stumble dehydrated into a strange and new hotel lobby whose name you don’t even know; there’s a 20kg backpack weighing heavy on your aching shoulders, 2 monster cameras around your sun burned neck, and you’re dragging a huge suitcase behind you, and for me you can add in a bike bag.

It’s time to try and get your room, along with the 250 or so other race riders, officials and cling-on’s. You’re pretty well bottom of the list, so step out of the fray and find a corner where you can pull out your lap top and start to do some work. 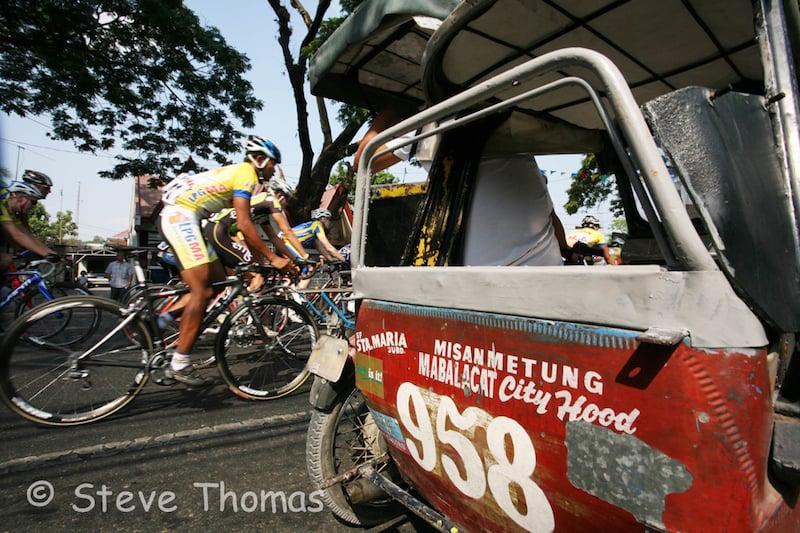 Everybody’s tired. I mean they’ve just ridden a bike race, and the officials have had to sit in dry air-con cars all day, bored stiff. Us, the photographers; well — we’re usually filthy, wet, and by this stage can hardly open our eyes after a day with grit and wind in your face (you can’t use shades with a camera), and your actual “real work” has not even begun.

Somebody comes across and asks if you can give them some photos for their website (and they ask every photographer on the race) — free of course, after all — “it’s only a picture.” It’s not like you’ve risked $15,000 worth of kit and your arse to get it, or even taken huge financial risks and worked your underpaid skills for years to get to this point.

You politely hint to them that while they’re having their dinner, massage, or watching TV you’ll still be in the same clothes working your way through the 500-700 or so images that you’ve shot during the day — sizing, cleaning, captioning, backing them up — and of course finding a way to get them all out to websites, sponsors or magazines that same evening. Either way you know that anything you put out online that day will be hacked by the end of the day and on every imaginable Facebook page, and then some. 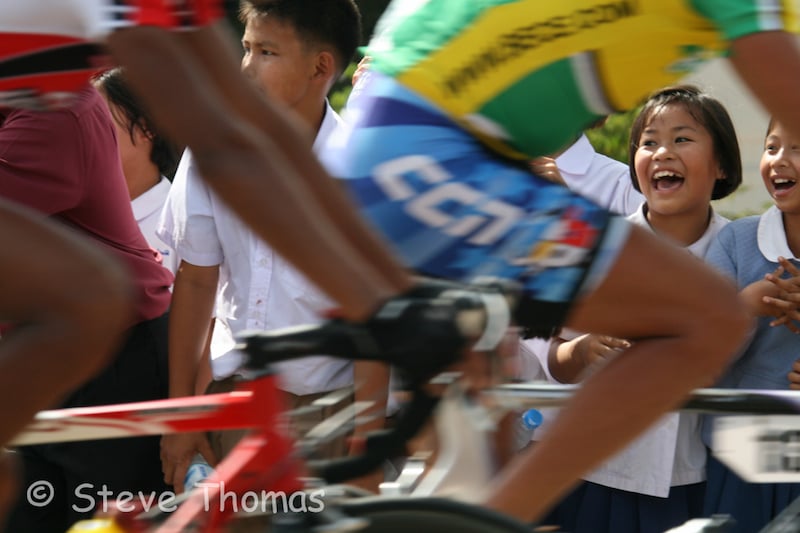 The shower and the beer comes somewhere after midnight, and then you get to clean and pack your gear before leaving the hotel at somewhere between 5 and 8 am the following morning. They walk away with a frown. It’s all part of life as a race photographer.

These days a huge chunk of my race work is from Asia, as I’m based there. Things are a bit different here, especially when compared to Europe or Australia. In the major European races moto-pilots and their photographers are as one, often working together year-round. They have years of experience and know the game inside out. 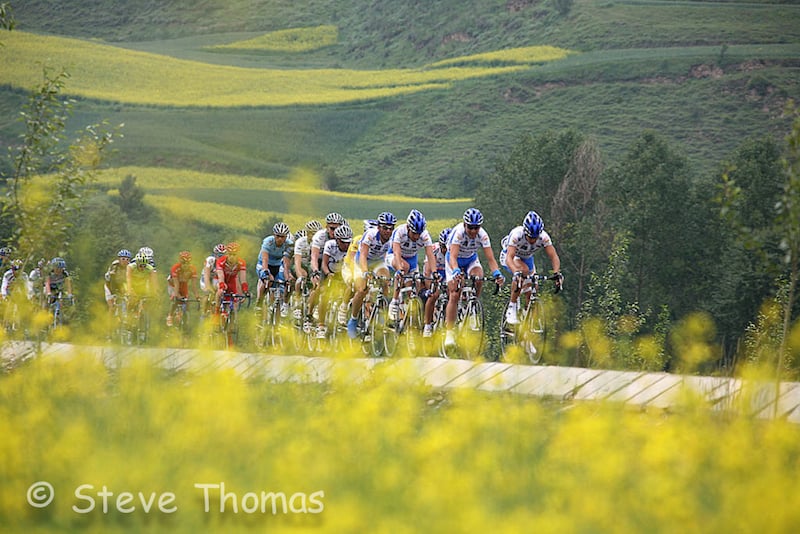 That situation rarely applies in Asia, and all too often you’re taking your life in your hands when you hop on the back of a strange motorbike with a leather clad man with just one word of English in his vocabulary — “yes,” which can also mean no or maybe, or anything else for that matter.

At Asian races moto-pilots are mostly assigned to you by the organizers, often a different one each day, and sometimes as an after thought. Many of them have little or no experience of this situation, and are members of local motorcycle clubs or marshaling companies who can sometimes be a little over excited at the chance of riding at unrestricted-speeds on closed roads with their mates. 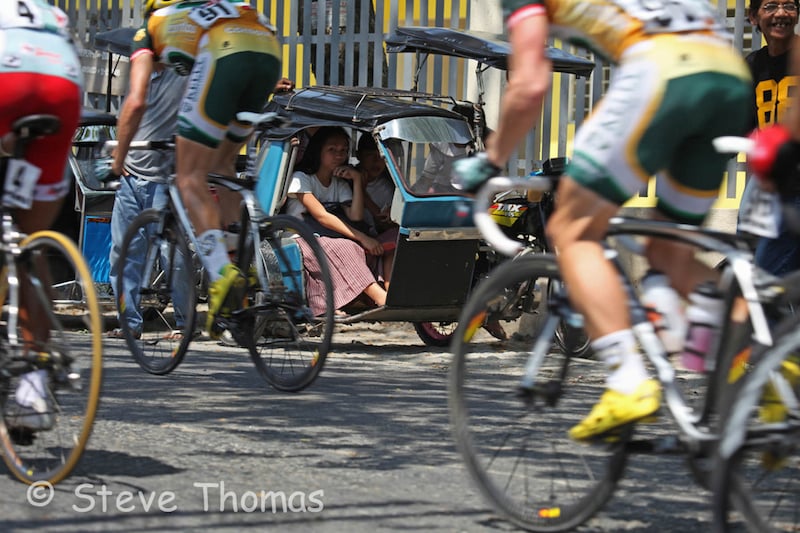 And of course, then there’s usually the language barrier — or blockade. Primitive forms of sign language are rapidly developed on start lines, regulations are, well, hinted at politely, and then you hit the road with a sense of fear and anticipation.

This is when you generally find out that your pilot doesn’t feel too happy getting close to the riders, and has no idea of where to ride as the peloton swings from side to side so he hits the brakes — riders yell and gesture, you hit the dirt as he panics and the commissaires blows his whistle at you, another close shave. In the Tour of Qinghai Lake I spent a good portion of the race off-road, which was quite un-nerving. 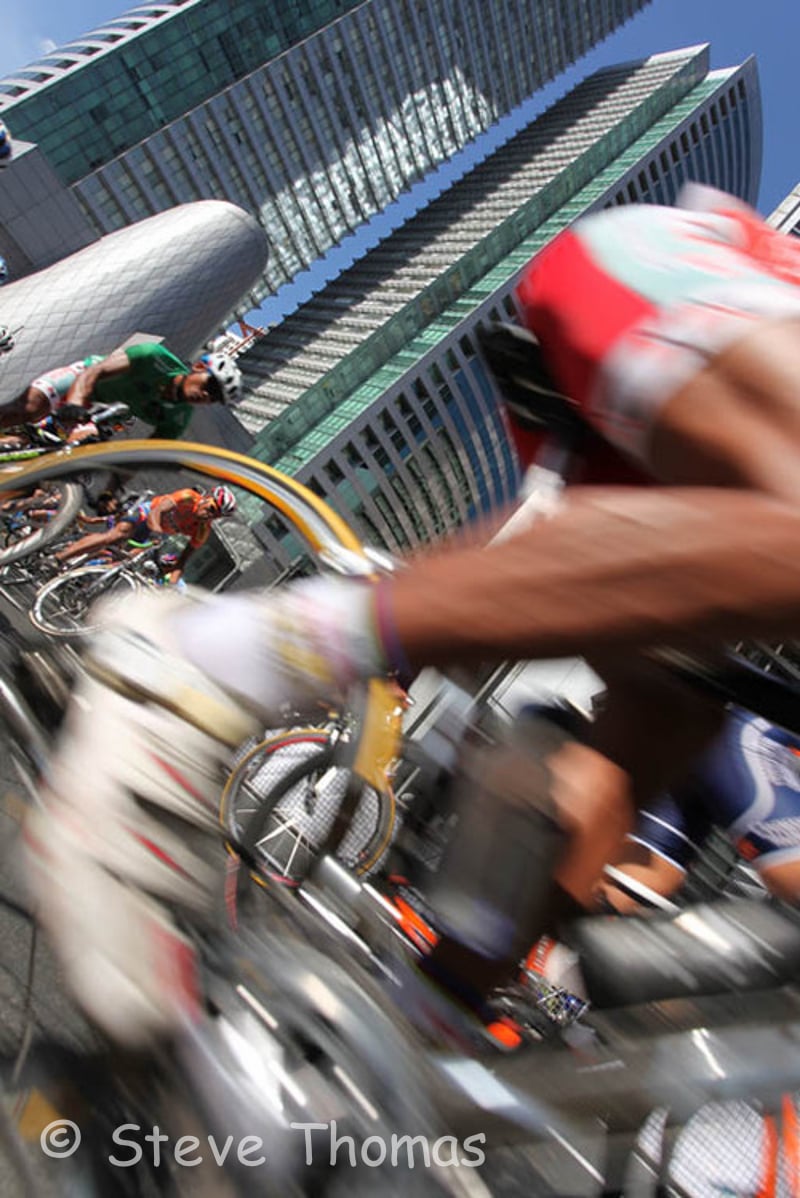 Being as Asian races are usually multi-day “packaged” stage races you get to know the riders quite well, and mostly they can see and take note of the situation, whereas certain regular commissaires are far from understanding of the obvious plight, and see the media (apart from TV) as something of a burden, despite the fact that without you nobody would hear about the races and their cushy numbers might be called in.

A few years back, also in the Qinghai Tour, it was raining and snowing like hell in the mountains and my pilot was trying to descend with the riders, but had no idea of how to take racing lines around the corners… the bike was sliding all over the road, and we went off-road twice. After a while I stopped him and climbed off — and hitched my way back to the finish in a following car. A day later he decided to hit 160kph on a bumpy concrete road through a town, showing off — or at least that was the speed when I closed my eyes and clung on for my life, with cameras strangling me was we hit the ruts. 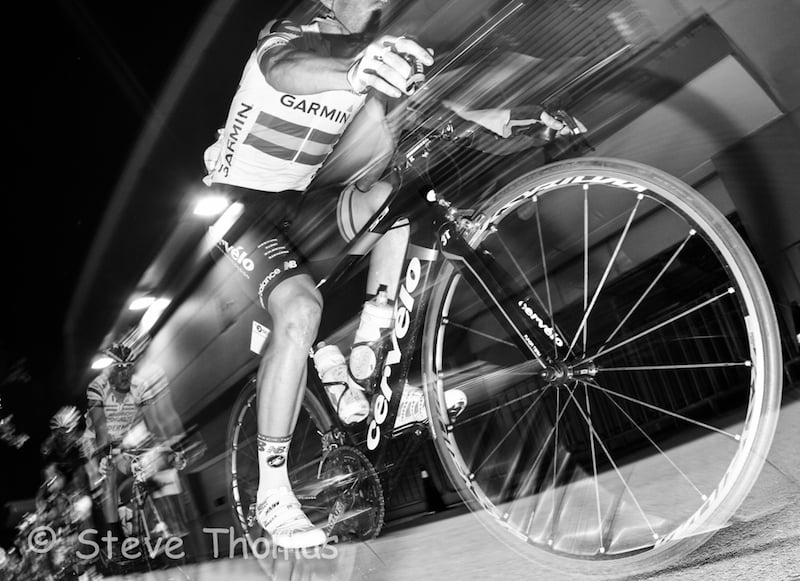 In the meantime, back in the peloton, a team car swerves right instead of the regulation left; a fellow cameraman and his pilot smack into the back of the car, going through the window and ending up impaled on the team tool kit, ouch. It’s a fairly regular occurrence, and photographers often get seriously injured or killed — yet you rarely hear about them.

In the Tour de Langkawi a few years back the break was climbing Genting, the biggest mountain in Asia, and I was real close in shooting a rider (Andrea Taffi) — he threw off his race cap. My moto pilot slams on the anchors and jumps off, in the middle of the road, the straining riders swerve around him as he runs for the souvenir cap. I could hardly believe it, until he did the same for a bottle a few minutes later — we missed the finish. 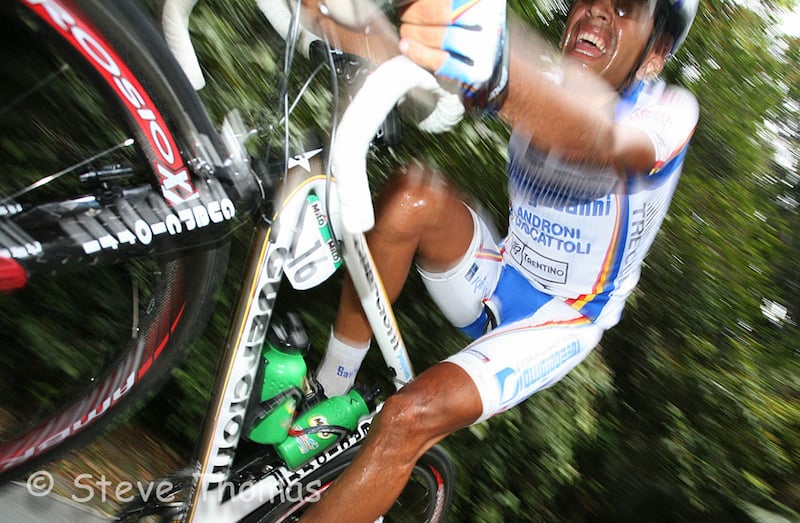 A few years later in the same race, just after the feed zone, my pilot veers off-road and starts collecting souvenir musettes — with his foot, while still moving. Angrily I explain that we need to catch the race — we missed the finish again. It’s total silence.

One year I covered the Tour of Thailand, where there were 30 moto-commissaires (which is typical in this region), but no moto-pilot for a photographer. Under pressure from a UCI observer I was given a 125cc moped and driver to follow the race. Five days, with transfers, an average 6 hours a day crammed on this underpowered beast, burning my legs on exhausts, unable to keep up with the riders on steep climbs or fast run-ins, perhaps the most uncomfortable week of shooting ever. In the Tour of South China Seas I was given a tiny moped to cover the race, but it just could not match the speed of the race, we just kept circling and getting lapped, grabbing what I could as the riders sped by.

I’ve worked as official photographer on a number of tours in the Philippines too, which is always interesting — as the race info rarely agrees with the actuality. On one race my nervous pilot simply would not “go-go” when told to, preferring to hesitate. It became extremely dangerous, especially when the monsoonal rains hit on a narrow and windy coastal road while weaving in and out of the race convoy. We were tapping wing mirrors and bumpers — I was genuinely terrified. 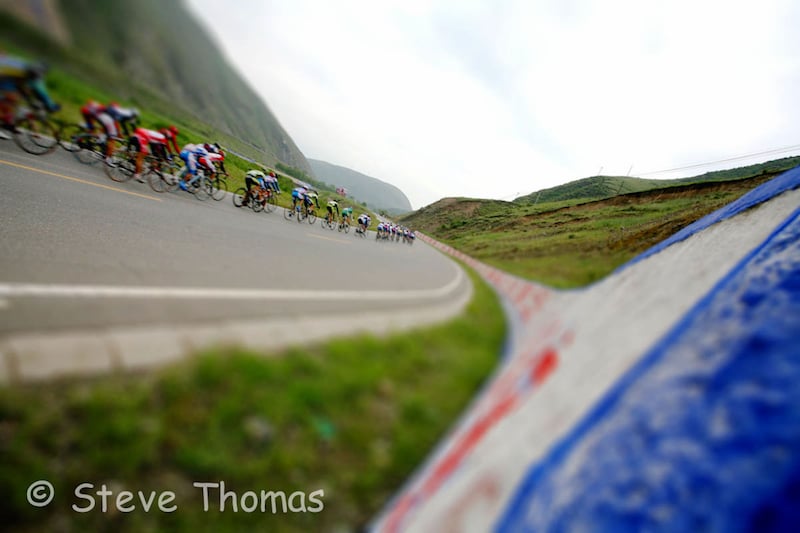 Halfway through this I was being signaled by an official; a small helicopter was waiting for me on a nearby beach — to get aerial footage. Great, we did a U-turn and raced back. I ran through a bemused group of fishermen and strapped into what was best described as a kit-copter. It rattled out to sea, but the storm was still in full blast so we were unable to come back to land. The fuel was also running out, so I was dropped in a remote paddy field, and had to hitch hike 40km back to the finish … without one single aerial race pic.

Tropical rain can be a huge issue in Southeast Asia, as it hits so hard and fast that everything gets washed out in seconds. In the days of film things would dry out overnight, but with digital, that’s a different matter — I’ve lost several cameras in just minutes while on the backs of motorbikes, which is an expensive occupational hazard of the digital era. When it rains there is rarely anywhere to hide, as it happens so fast. 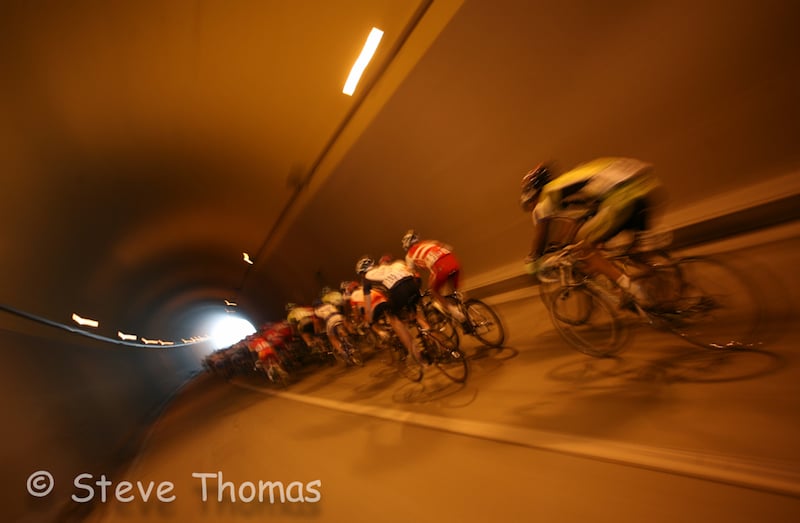 I’ve covered races from mopeds, full on choppers, cars, helicopters, and even microlites. At times it’s as scary as riding down Alpe d’Huez in the rain without brakes. But when you do see that one extra special image, the one that you know nearly cost you your life; then it’s worth it.

Unfortunately, that great arty image that purveys the culture and landscape as much as the race is rarely the one that the riders or websites like to see. They tend to flip to the bread and butter, passing over the wild horsemen for a clean finish line shot, which does make you wonder why you made it so tough on yourself in telling the bigger story.

About the author: Steve Thomas is a photographer and cyclist based out of Thailand. He’s been racing bicycles since the tender age of 12, and photographing/writing about it for over two decades. You can follow his work on Steve Thomas Images and TheSoftSaddle. This article originally appeared here.