Yesterday was the one year anniversary of Austrian daredevil Felix Baumgartner‘s insane Red Bull Stratos skydive from the edge of space. As the whole world watched, Baumgartner plummeted towards Earth from a mind-blowing 128,100 feet, ultimately landing safely.

The man free fell for a total of four minutes and twenty-two seconds, and if you want to watch the whole inspirational/terrifying experience from his point of view, now you can.

In honor of that one year anniversary, Red Bull has decided to upload footage from three action cams strapped to Baumgartner’s person during the stratosphere dive, alongside all of the mission data so you can see the altitude, airspeed and G-forces he experienced. 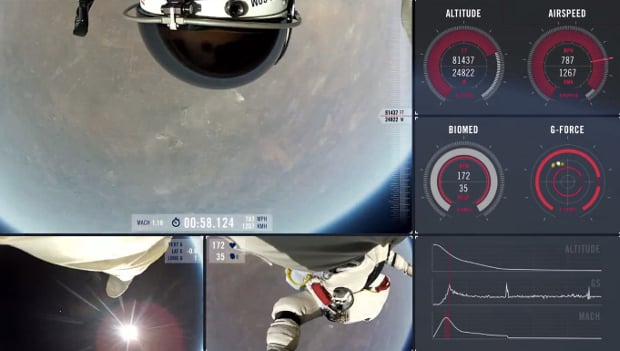 In case you don’t know the crazy statistics that go along with this video, Baumgartner broke three records during his Stratos jump: highest freefall, highest manned balloon flight and first free-falling man to break the sound barrier.

And even though he didn’t clinch the fourth record he was going for — longest freefall still belongs to Col. Joe Kittinger at four minutes and thirty-six seconds — that’s hardly something to get upset about given what he did achieve.

For more info on Stratos, head over to the Red Bull Stratos website by clicking here. But first, be sure to check out the video at the top to see the whole thing for yourself.