Here’s a cool project for those of you who enjoy shooting with both cameras and guns. Did you know that you can photograph a speeding bullet using only a sugar cube and no other light source? As it turns out you can, and Instructables user FPSoutback has the video to prove it.

To get the shot, he used his NEX-5N to take a long-exposure in pitch black conditions. He would trigger the NEX, wait for the two second countdown, and then fire at the cube with a .22 rifle. The resulting photos capture the bullet hitting the cube at the instant the cube is being split. That blue light you see is coming from the cube: 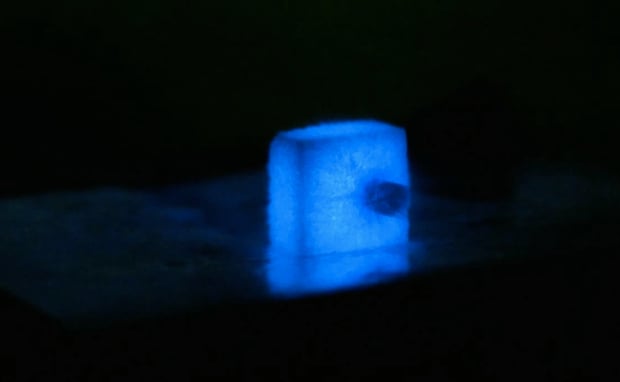 The reason this is possible is, as you might imagine, a bit scientific in nature. When the bullet hits the sugar cube, individual sugar crystals break apart. What you end up with is unevenly distributed charge, which needs to equalize.

To get back to a neutral state, electrons will move from one piece of the crystal to the other, creating a flash of light in the process. This is called triboluminescence.

As you can see from the video, most of that light isn’t in the visible spectrum, so to intensify the effect, he adds a little bit of oil of wintergreen (basically just methyl salicylate) which absorbs the light and re-emits it at a longer wavelength that is visible to the human eye.

The final shot is downright awesome: a speeding bullet photographed using light emitted from a sugar cube. I believe the quote turned meme by Jesse Pinkman from the series Breaking Bad is in order: “Yeah Science, B****!”

Reflections: Portraits of the Elderly Seeing Their Younger Selves