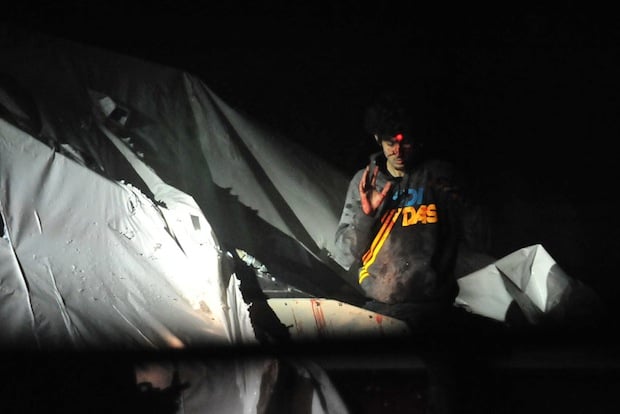 The jarring images were taken during Tsarnaev’s manhunt and arrest, and have resulted in Sgt. Murphy’s being relieved of duty as he awaits a status hearing to determine his professional fate.

The photos surfaced on Thursday, when an outraged Sgt. Murphy contacted Boston Magazine to express his feelings towards the Rolling Stone cover and provide photos that show what he calls “the real Boston bomber. Not someone fluffed and buffed for the cover of Rolling Stone magazine.”

The photographs show the entire manhunt, including several powerful images of Tsarnaev emerging from his hiding spot inside the boat, laser sights trained on his forehead. Speaking to Boston Magazine, Sgt. Murphy expressed his outrage, and the impact he hopes his images will have:

I hope that the people who see these images will know that this was real. It was as real as it gets. This may have played out as a television show, but this was not a television show. Officer Dick Donohue almost gave his life. Officer Sean Collier did give his life. These were real people, with real lives, with real families. And to have this cover dropped into Boston was hurtful to their memories and their families […] What Rolling Stone did was wrong.

However, releasing the images didn’t come without consequences. Although he made it clear that the views he expressed in the Boston Magazine article are his own, and not his department’s, he was promptly relieved of duty none-the-less.

His fate with the department is uncertain, but as of right now “relieved of duty” does not translate into “fired.” The Sergeant has been ordered not to speak any further to the press, or discuss the Tsarnaev arrest with anyone else, pending a status hearing sometime next week.

According to CNN, the hearing will determine whether Murphy is returned to full duty, restricted duty or suspended while the department conducts an internal police investigation.

To read all of Murphy’s comments and see the full gallery of photos he provided to Boston Magazine, head over to the magazine’s website and read the entire article by clicking here.