Here’s a little something that might help start off your work day with a smile, or perhaps an “aww.” This video above is a mock movie trailer put together by Fresno, CA firefighter Cory Kalanick using footage he captured of a kitten rescue and resuscitation he performed last month.

The rescue happened outside of a smoke-filled home in Northwest Fresno. Told to go look for salvage, he instead found the lifeless body of a little kitten. He then proceeded to take the kitten outside, pour water on it and administer a full tank of oxygen until the little guy came back to life. 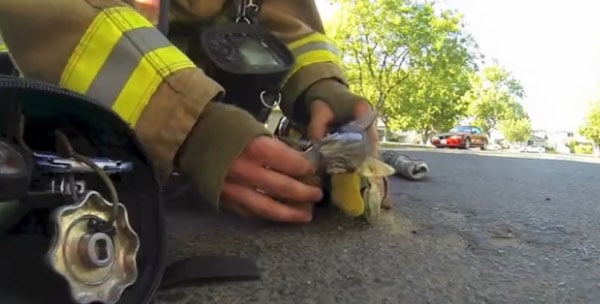 Fresno’s CBS47 had a chance to talk to Kalanick:

But you’ll notice something else about Kalanick’s video at the top. Rather than putting the raw footage online, he edited it into a “movie trailer” of sorts, poking fun at himself while telling the story.

Surrounded by Sundance Film Festival-like leaves, the trailer proclaims that The Rescue has won the “Tree Hugger Award,” while a direct quote by the aptly named ‘Lucky’ the kitten dubs it “one of the most life saving films of the year.”

Movie trailer or not, there’s a reason Kalanick always has his helmet cam running. Most days, he tells CBS47, it records the worst moment of someone’s life … this time it recorded a precious miracle.