AP Photographer David Guttenfelder is a conflict photographer. He’s spent much of his photographic career capturing war through the lens of his camera. One thing he certainly never considered himself was a bird photographer.

But when he was sent on an assignment to illustrate a National Geographic piece on the illegal hunting of songbirds, he became one. And it slowly dawned on him that he wasn’t just doing a documentary, environmental, or conservation piece — this was simply another form of conflict photography.

The video above is a short interview in which he explains how this assignment changed him. His photography illustrates an article in the July 2013 issue of NatGeo that goes into detail regarding the illegal slaughter of song birds and migratory birds for whom government intervention is nearly non-existent. 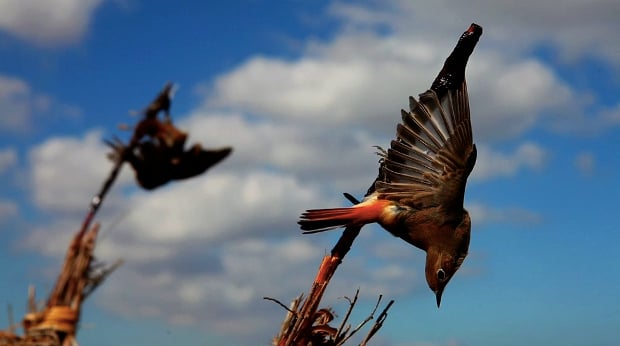 All along the Mediterranean — in countries like Italy, Cyprus, Egypt and Albania — bird populations are dropping sharply as the creatures are mercilessly cut down. In some cases, they’re hunted with guns. In others, they’re trapped using adhesive “lime sticks” disguised as perches.

Fortunately, for the latter, Guttenfelder himself was able to do a little bit of good alongside the activist he was working with. They would suck on the sap-coated feathers and feet of the trapped birds once they had been freed to remove the rest of the sticky stuff without injuring the bird any further.

It’s a tragic story, but those birds they saved act as a bit of a silver lining. You can read the full article by novelist Jonathan Franzen here, or see a gallery of heart-breaking photos taken by Guttenfelder over the course of their travels here.

Documentary: The Story of Life Magazine, Where Pictures Could Change the World