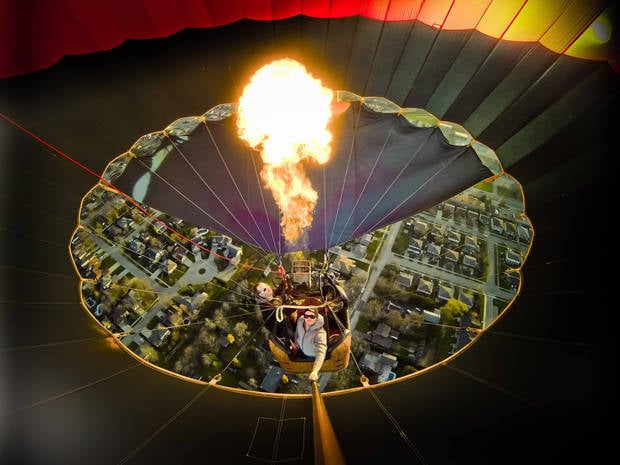 The advent of the GoPro has brought about a real surge in adventure and sports photography/videos. Suddenly amateurs have been able to capture some of their pro-level tricks and treks and share them with their friends and the Internet.

While some people tend to look down on amateur-level photography, I think most would agree that at least this avenue has actually made things far more exciting. What has made this instance so different? Well, while some are satisfied simply strapping their GoPro to their head and jumping on a mountain bike (exciting in and of itself) others have found some more inventive ways of utilizing their camera.

Because let’s be honest, if all you’re doing is capturing your latest attempt at a snowboard trick or your weekend water filled expedition, you’re really only exploiting about 60% of its power and versatility. So let’s see what else we can stick it to.

But first a quick side note: you may have noticed that I’m being a bit brand specific so far. For the purposes of this post I’m going to discuss using a GoPro because that’s what I have and that’s what I know and that’s what most of the referenced videos used.

That said, most of this could probably be applied to other similar cameras like the Contour or the camcorder you duct taped to your skateboard helmet. So please apply the following advice liberally to your own equipment (however do so at your own risk, we’re not responsible for any damage to your personal property).

Plenty of people have increased their GoPro’s armor, flown it up on a balloon, and let it drop. That’s not what I’m talking about here (although that is pretty cool too). I’m talking about rocketing it through the air, be it via sling shot or just plain old hand cannon. Getting a projectile’s POV can be incredibly interesting and will give you a perspective of your surroundings few will ever see — at least until you share it on YouTube.

Another idea is attaching it to fireworks although I suggest taking extra precautions so you don’t blow up, melt, or mutilate your camera. You see, the key here is to actually get the footage off the camera afterwards, so if it’s in pieces that may be a little difficult. For one last interesting take on the whole “send it flying” concept, I suggest you put it inside a water balloon and check out the results. Primarily because I really want to see what it looks like, so if you do please share it below.

2. Attach it to Sports Equipment or Toys

Now I know I said everybody uses their GoPro for their weekend foray into sports but what we’re discussing here is being creative with that idea. Instead of attaching it to your bike helmet, strap it to your hockey stick while you play a game of hockey, or better yet, strap it to the puck like this guy. Don’t play hockey? Try using a sword like the guys above. Don’t have a sword? Well maybe you should re-evaluate what you’re doing with your life then.

3. Attach it to an Animal

Ever wanted to live a day in the life of your cat? Me too, but that’s because all they do is eat and sleep, so maybe that’s a bad example. However, living a day in the life of a dog and seeing the sheer unfettered joy of running through the yard at knee level — that could be fun.

Or perhaps you could be like this guy and let an animal steal it. Bonus points if you let an animal eat it like this guy almost did, or almost better yet are able to capture your friend getting tackled by an animal like this guy (I know this one isn’t technically attached to an animal but it was too good not to share). All that said, please be humane. If your animal looks like it’s in pain or unhappy, take it off, no video is worth hurting your pet.

4. Use It Around The House

And by that I mean stick it inside an appliance. One of the best features of the GoPro is that it’s essentially waterproof. So why not put it in your dishwasher and see just why those crumbs stay glued to your plate no matter how many washes? Or better yet put it in your washing machine.

Don’t want to risk the damage? Fair enough, why not try attaching it to your vacuum cleaner or lawn mower and watch the grassy massacre unfold from ground level? If nothing else this sort of experimentation will at least motivate you to actually do your chores.

5. Attach it to Your Instrument

If you’ve ever watched a video of a live music performance you know it can get pretty boring pretty fast (with a few exceptions of course). Luckily you have a GoPro though and aren’t limited by your standard tripod or holding your smartphone in the air at a concert. Try making that footage more dynamic by strapping the camera to the actual instrument. The best part about this concept is you don’t even have to be in a cool rock band to make an amazing video. Just check out how the kid above used it during his drumline performance.

Hopefully if you’ve learned anything here it’s that you can and should attach your camera to ANYTHING that moves! Specifically beyond your own head or body. Seriously, it’s a pretty resilient camera and if you’re trying to keep it safe you’re probably not using it right. Anything that moves can provide an interesting perspective. In fact the more common the device the more interesting the perspective may be.

And don’t let yourself be limited by the mounts or attachments you have either, that’s why God gave man duct tape. So get out there and start using your GoPro, Contour, or what have you, to greater effect and share the results below. Or if you’ve found your own interesting GoPro video feel free to share that as well. Who doesn’t love spending 5 minutes at work watching an awesome video on the clock?

Photographer Mark Cohen and the Birth of Invasive Street Photography