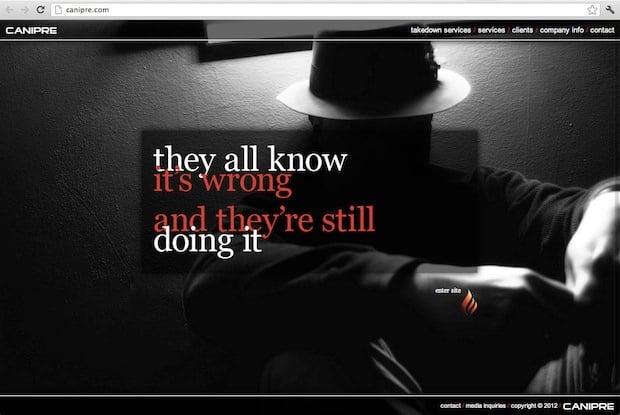 Canipre — short for Canadian Intellectual Property Rights Enforcement — is a Canadian anti-piracy company that has joined hand-in-hand with film studios and record companies to track down those who steal and share stolen content over the internet. On the surface there’s nothing wrong with this, what is wrong is when an intellectual property advocate is found using photos without permission, which is exactly what happened to Canipre a couple of days ago.

According to Vice Canada, who broke the news, three photographers found their photos were being used by the site a few days ago, and none of them had given the anti-piracy company permission. The three photogs are Steve Houk, Sascha Pohflepp and Brian Moore, the last two of which licensed their images CC, which means Canipre had only to credit them to avoid any embarrassment. Unfortunately, they had not done so.

For their part, the company responded promptly (if, in some opinions, inadequately) when Houk contacted them via e-mail to get his photo taken down. Canipre managing director Berry Logan contacted him immediately apologizing and explaining that it was a third party web developer who had licensed the photo through an image bank. Houk claims he has never licensed his photo out to anyone:

I did notice that they took down my photo, but I have not heard back from Logan regarding the name of the developer and where they sourced my image.

All of the photos have actually been taken down, and we assume that Canipre will get in touch with all of the photographers to, at the very least, apologize profusely. The damage to the company’s reputation, however, is done. As Houk explained in an email conversation with Vice, “it was disheartening to see a company that champions intellectual property rights pirating someone else’s creative work.”

Sony May Make A-Mounts Fully Mirrorless in 2014, Working on a A-E Hybrid As Well

Shooting Photos of 10K Runners with an Off-Camera Flash