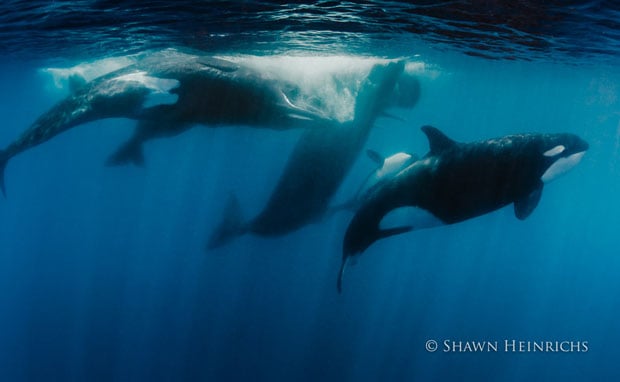 
The expedition came across the fight after spent 8 days battling “rough seas, burning sun, cramped boat conditions, and long days.” They first noticed violent splashing on the ocean surface ahead of their boat. As they came closer to the commotion, they realized that they were witnessing a royal rumble of very large proportions.

Here’s a video of what they saw, recorded by Shawn’s brother Brett:

“In all my years on the ocean, I had never heard of such a thing and certainly never imagined I would see it with own eyes,” Heinrichs writes.

So he did what any photographer would do: he grabbed his trusty Canon 1D-X in Nauticam Housing and his GoPro 3, and then began capturing photos and footage of what was unfolding before his eyes.

As he snapped away, the scene began to become a little more clear: it appeared that a pod of roughly 5 orcas were tearing into a family or about 6 sperm whales. Heinrichs says, “The attack was violent and disturbing as the panicked Sperm Whales were clearly no match for speed and maneuverability of the orcas.”

After capturing some images from the relative safety of the boat, Heinrichs took things one step further and jumped into the water to capture the ruckus from a closer vantage point. Then, a close call:

All eyes fixed on me wondering if I would become easy prey for the most formidable predators in the ocean. Wasting no time, I grabbed my camera and slid off the back of the boat. There was a frothing, dark pile of shapes ahead of me. Drifting away from the boat toward the action, I took note as the largest Orca in the pod broke off and made a bee-line for me, pinging me with its sonar.

Time slowed down as my mind battled with my intuition. I had heard warnings before about the extreme dangers of swimming with ‘wild’ Orcas, especially when these apex predators are engaged in a hunt. But in my heart I knew they were highly intelligent and evolved creatures who ‘should’ have no interest in hurting me. As it approached, I thought to myself, ‘well I am about to find out the answer’.

The Orca came right to me then veered off at the last moment, drifting down into the deep blue below me. 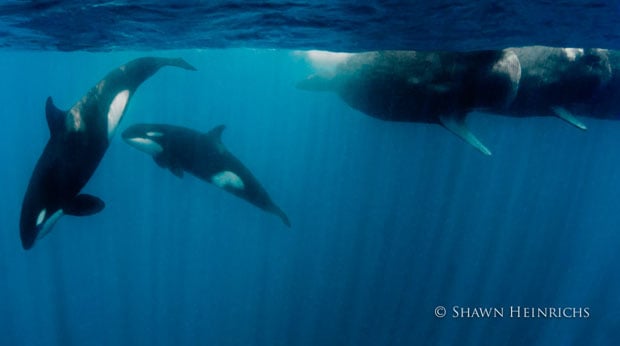 In the end, Heinrichs doesn’t know whether the orcas succeeded in their hunt, but he was able to return home knowing that he had witnessed and captured photographs of a rare and incredible event.

(via Blue Sphere Media via Wired)