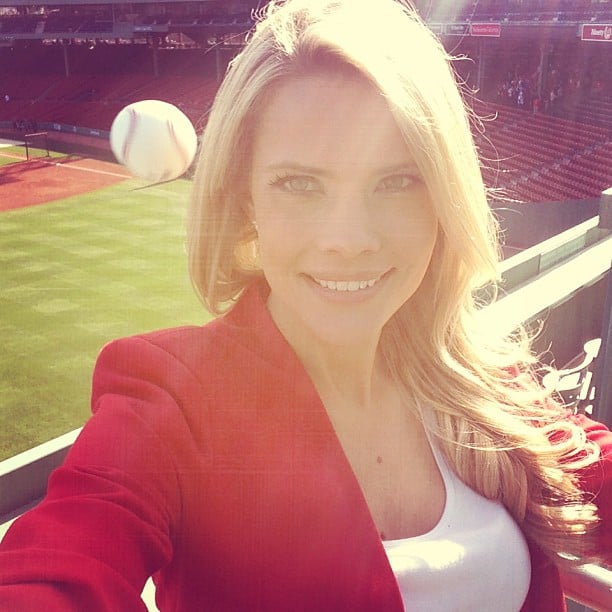 Sun Sports Rays reporter Kelly Nash recently snapped some selfies atop the Green Monster, the tall left field wall in Fenway Park (home to the Boston Red Sox baseball team). Afterward, while reviewing the photos, Nash discovered the image above: it reveals that a speeding baseball whizzed by Nash, nearly slamming into her head.

Nash was visiting the park this past saturday for a future story on the Tampa Bay Rays. Here’s her account of what happened, according to Fox Sports Florida:

I was taking a picture of myself in the seats above the Green Monster during Red Sox batting practice.

Producer Art Dryce had called out ‘heads up!’ a few times while I was taking pictures around the left field section, but none of those balls actually fell close to me, so I took my chances turning my back on batting practice for a picture.

My whole family is from Massachusetts, and I knew they would be so excited to see me working at Fenway Park, and when I went to text them the picture I noticed the baseball by my head!

I laughed pretty hard when I saw such a surreal picture that I had no idea I took. I thought, you have got to be kidding me, maybe there ARE really angels in the outfield. I actually brought the movie with me on the trip and had it in my bag at the game.

Art had picked up what we think was that ball and gave it to me after we saw in the photo how close it came to my head.

Nash’s caption for the Instagrammed selfie states, “Most dangerous selfie ever. That happened.” She also followed up the selfie with a photograph of the Angels in the Outfield DVD she was carrying with her. “Think the Angels in the Outfield saved me because I brought their DVD with me on the trip? #ThoughtSo,” she writes.

Kodak to Sell Its Camera Film and Imaging Businesses in $2.8 Billion Deal