Edith Widder is one of the three scientists that managed to capture the first high-resolution video footage of an actual giant squid. And about a month ago, her TED talk describing how she and her team did it (embedded above) was finally posted online.

Almost 2 stories tall, you would think that something that massive would have already been photographed or video taped. But it was Widder’s common-sense approach that would yield the groundbreaking footage. So, how did scientists manage to finally catch a giant squid on camera? One word: quietly.

Surprising as it might seem, Widder postulated that giant squids — much like most other sea life — are skittish. With most submersibles using loud, hight pitched, hydraulic engines, she had a feeling that scientists were doing more scaring then luring. 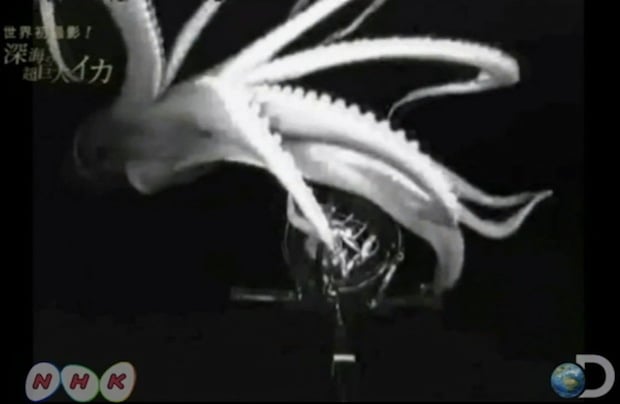 So Widder convinced scientists to use a quiet approach, and it’s that approach that ultimately worked. The first sighting came by using an optical lure attached to a motor-less camera platform. Using a special type of blue-light lure and only red light for illumination (red light is invisible to most sea creatures), Widder and her team captured the image above.

But the really impressive footage was actually shot from an electric powered, quiet Triton submersible. Using yet another special light lure and red light for illumination, the scientists got the giant to attack a regular sized bait squid. Once the scientists had the behemoth in their sights, they risked turning the big lights on, and started rolling.

You can hear Widder tell the full behind-the-scenes story by watching the TED talk at the top. Or, if you wanna see the entire Discovery Channel special, you can find that here.