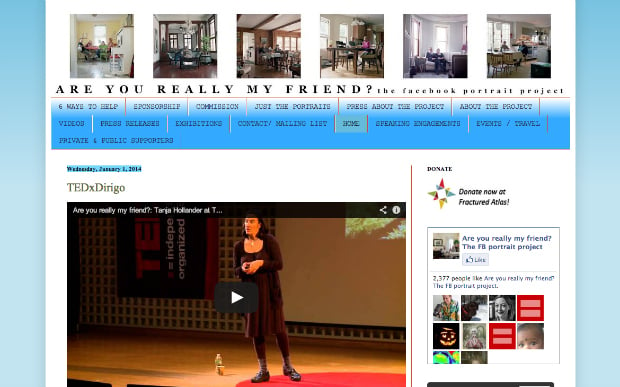 Back in April of last year, we featured an interesting project by photographer Tanja Hollander. Dubbed The Facebook Portrait Project, Hollander has spent the last year travelling around the world and taking portraits of all her Facebook friends. The project’s motivation was half photographical and half philosophical, an exploration of the definition of “true” friendship that Hollander is still in the midst of today.

As she found out recently, however, she’s not the only one: photographer Ty Morin has embarked on a similar journey. And even though they say that imitation is the sincerest form of flattery, the amount of attention the press has been giving Morin’s imitation has left Hollander feeling anything but flattered. Morin’s project is called Friend Request: Accepted, and it finished a very successful (and then some) campaign on Kickstarter 7 days ago. With the money he raised, Morin plans to visit all 788 of his Facebook friends over the next few years, photograph them, and put together a “Friend Request: Accepted” film and photo series.

As Morin’s has gained more and more momentum, Hollander has become increasingly agitated at the lack of attribution she’s gotten as the originator of the idea. She spends her time traveling for, putting together museum shows for, and giving lectures for this project. She’s even given a TEDx talk about it (below). And even though she understands that she doesn’t own the idea, she’s upset that neither the press nor Morin himself have given her what she deems to be sufficient credit.

After quoting Mashable’s viral coverage on Morin’s project, in which they mention her briefly but call it “still a pretty cool idea,” she asks via blog post:

Hollander has expressed no interest in pursuing legal action against Morin. She simply hopes that her digital outcry will be heard so that she may receive due credit and bring attention to the fact that Morin’s project, while “pretty cool,” is still an imitation.

Birds of Aperture Combines the Worlds of Cameras and Taxidermy