Earlier this year, Australian artist Callum Cooper released a video called Full Circle that featured footage captured by a camera attached to a jump rope. It’s a bit nauseating to watch, but the creativity of the project has led to hundreds of thousands of views for the short.

Cooper is back with a new project based on the same idea. It’s titled “The Constant and The Flux,” and you can view a portion of it above.

Cooper was commissioned to create the piece by the Toronto International Film Festival. He ended up recruiting roughly 300 random Toronto residents, and had them either hold the jump rope-style camera rig or act as the jumping subject being filmed.

The resulting film is being displayed at the festival every evening on a giant atrium wall. 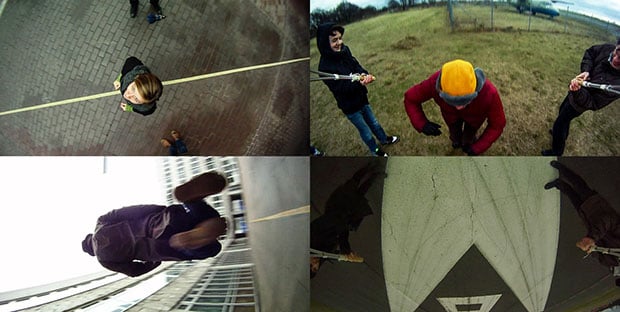 Describing his specially commissioned new work for Future Projections, Australian artist Callum Cooper turns to cinema’s earliest days. In the early twentieth century, pioneering camera operators would show up just before the arrival of travelling fairs and shoot footage of townspeople and local landmarks, which would later be projected in a bioscope on the carnival grounds. Cooper will begin filming in Toronto about ten days before the Festival begins, at found locations and with random citizens.

He uses a unique apparatus that swings the camera in a tight arc, creating a fascinating interactive experience for the people he films — and allowing a smooth cut to the next participant.

Cooper is quite the master of making experimental films that are both creative and nauseating. Here are a couple more of his projects. Be warned though: you might want to throw up while watching them:

(via TIFF via BOOOOOOOM!)

Your Breath Contains Harmful Acids That Can Damage Camera Lenses