Try imagining a make-believe creature that has absolutely no basis in reality. Can you? Not really. The truth is, everything imaginary is simply a rehash of things that actually exist… just in a combination that doesn’t exist. Aliens are simply strange combinations of humans and other creatures that we know. Unicorns are horses with horns. Bigfoot is some guy that accidentally spilled Rogaine all over his body.

This is the basis for writer Kirby Ferguson’s big idea: that “everything is a remix.” He created a popular four part video series on this topic over the past year, and recently he was invited by TED to give the condensed, sub-10-minute version of it that’s shown above.

Ferguson argues that copying, transforming, and combining are the basic elements of creativity that are used by any creative artist — elements that often cause the photography world to cry foul and point accusing fingers of plagiarism. 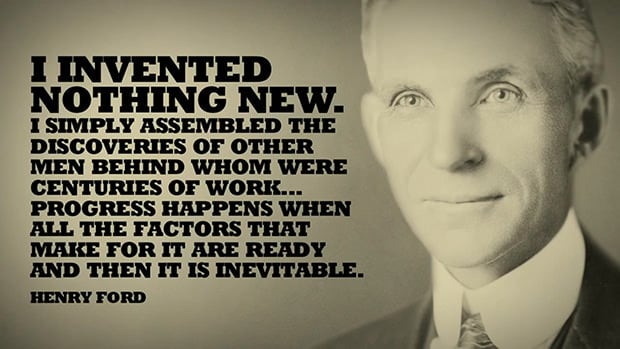 The fact is, much of this stealing/borrowing may occur unintentionally. One photographer or artist sees the work of another, enjoys it, and then forgets about it. Sometime later, when the work suddenly bubbles up in the photographer’s mind, he or she mistakenly believes that it’s an original new creation that they themselves came up with without any outside influence.

In other cases, the borrowing could very well be very intentional, or even malicious. A famous quote uttered by Picasso is that “good artists copy, great artists steal.”

This lecture by Ferguson is a fascinating look into the nature of “creating things” in our mind, and may change the way you think about “original work”:

Our creativity comes without, not from within. We are not self made. We are dependent on one another, and admitting this to our selves isn’t an embrace of mediocrity, and derivativeness — it’s a liberation from our misconceptions. And it’s an incentive, to not expect so much from ourselves, and to simply begin.

SmugMug Pulls a Netflix, Raises Fees for Some Customers by 67%