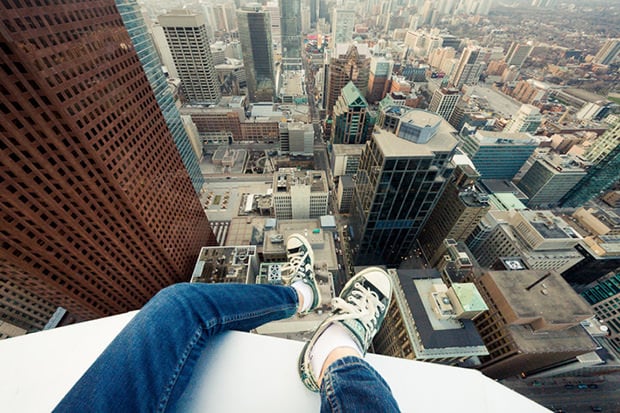 One year ago today I took a photograph that would change my life. A single frame turned my whole world upside down, and brought on a storm of media attention, praise, criticism, confusion, wonder, and doubt. After one hell of a ride this past year, I think today is a good day to finally tell this photo’s story…

The birth of a movement?

I guess this all started in 2007, when photography became a full time obsession for me. That summer I returned from Europe where I learned to use my first DSLR (Canon Rebel XT), and leaving the house without a camera was just not an option anymore.

I was shooting some street just before sunset when I came across a construction site on a busy Toronto intersection. It didn’t seem like there were any workers around, but the gate was wide open. I thought I could get a cool vantage point to shoot the skyline so I just went for it, found the stairs and climbed to the very top.

The building wasn’t very high, perhaps 15 or 16 storeys, but when I got to the top and opened the door to the roof I got an instant rush of adrenaline, like I just opened the door to a secret world of wonder. The city was right in my face, like I’ve never seen it before; the sun was setting and all the lights were starting to turn on. The noise from the street was muted, the cars and people moved about in what seemed like slow motion, it was like a Eric Satie song. It was magical.

The first rule of rooftopping is…

Fast forward five years and “rooftopping”, as I (and many others) called it, was on the tip of every urban explorer’s tongue, at least in Toronto. It wasn’t something you just did on the weekends, it was your life. Every building I walked by was now a potential target. I was sizing up the elevators, fire escapes, security, entrances and exits everywhere I went. Even in my sleep I was dreaming of roofs.

It was a Saturday, and the weather in Toronto was just starting to turn warm again, the sky was bright blue and the sun was shining overhead, it was a perfect day to go rooftopping. Jennifer Tse and I planned to hit one of Toronto’s tallest buildings under construction. After an exhausting climb we got to the top and shot for about 30 minutes. It was midday and the building was higher and further away from the city then we expected, not what we had hoped for.

We finished up and descended back to ground level where we met Hi-Lite and Peter, two of Toronto’s premier rooftoppers. We walked around for a while and scouted a few buildings when we serendipitously found ourselves in front of one of Toronto’s sweetest high rises. Nestled in the heart of the financial district, it was a building we have attempted and failed many times before.

There was no time to waste, we were going for it. After moving past security without incident, we found ourselves in the elevator watching numbers run up. The sense of uncertainty and anxious anticipation was thick, but luck was on our side on this day, and a few minutes later we were face-to-face with an open hatch.

This is where things get hazy. You see, coming out of the hatch of an epic skyscraper in the middle of the city, for the first time, is really hard to put into words. I guess it’s what I imagine a caged bird would feel if you leave the the gate open, a warm rush fills your chest and for a moment, everything slides away and nothing can touch you, you are truly free.

After a few high fives were exchanged, as we often do when we get on a roof, we split up and started to shoot. Since we all shoot Canon we had all our gear in the same place where we could easily exchange lenses, I believe we had a total of five lenses to choose from that day.

The light was perfect, the views were stunning, everywhere you looked a great photo was waiting to be taken. After shooting for a while with the wides I set my fisheye on the ledge and started to shoot with the 50mm. Jennifer picked up the fisheye and sat out at the edge of the building, as she often did, and began to shoot her shoes with the skyline in the background (see here, here, and here). The 50mm wasn’t doing it for me so I grabbed the Sigma 8-16mm, which Jen had just removed from her camera.

I’ve had many people ask me what planning and preparation I took to get “I’ll make you famous”. The truth of the matter is there was no staging or prep involved at all. As Jen sat at the edge and took her own photos I stood over her and shot a series of photos without even looking through the viewfinder.

As the sun was about to set, we wrapped up and headed down. I remember looking at the photos in the elevator, I saw the shot and thought I had something but didn’t have much time to analyze. We went on to ‘rooftop’ one more building before calling it a night.

When I got home that night I set the photos to upload and made myself something to eat. When I came back everything was ready to process. I took 422 photos that day, and as I scanned through the grid view in Lightroom one photo stood out from the crowd.

The first thing I did when I saw the photo was flip it upside down; it instantly took on a new dimension. The next thing I did was bring it into the Develop screen (in Lightroom) and tried to apply a couple of different presets to it. Neither seemed to work so I tried a preset I’d been working on for 3 months called “Shopping Family”. After a few adjustments I finally was able to give the photo that pop that it needed. I published the photo two days later.

The photo instantly blew up. Within 24 hours of posting the shot it had gotten 25k views on Flickr and huge numbers on reddit, but it was on the new upstart 500px where it really took off. The photo was picked as “Editors’ Choice” and quickly piled up 50k views in the first two days.

I never expected the photo to get such a response. Hundreds of people seemed really moved by the image, some negatively, while others thought it was photoshopped. Never the less, the ride was just starting.

The first media outlet to pick up the story was My Modern Metropolis, who ran the first article about rooftopping. Before I knew it all my photos were in demand, and WENN was keen on syndicating a story about rooftopping. I was pretty naive to the whole thing, so I said “sure why not”.

When I woke up on the morning of May 19th I had 500 emails in my inbox, including requests for interviews by BBC, RTL, and National Geographic USA. The story had been picked up by several major newspapers around the world (here, here and here, to name a few) with the headlines proclaiming rooftopping to be the new “craze”.

Everything happened really quickly from there, all kinds of doors swung open. I was offered the photo editor position of Toronto’s leading blog, I began to licence loads of my images, and I was selling tons of prints, all thanks to one photo. Even now, a year later, I still get 3-5 requests for this photo every week.

Keep shooting. One photo can change your life. About the author: Tom Ryaboi is a pioneer in rooftopping photography. You can view the photograph mentioned in this post here. This post was originally published on the 500px blog.

Descriptive Camera: An Instant Camera that Prints Text Instead of Photos