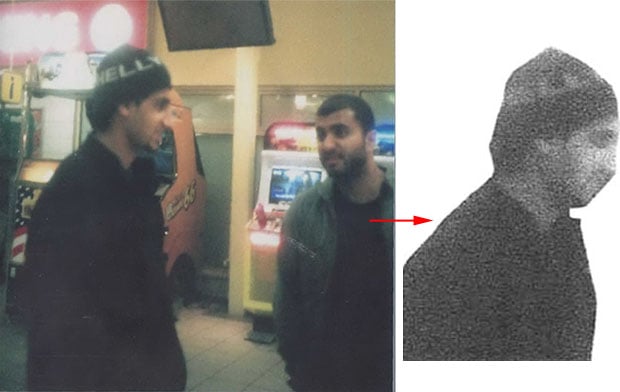 MI5 might have missed a golden opportunity to prevent the 7 July 2005 London bombings back in 2004 when they cropped a photograph of two of the terrorists badly before sending it to the FBI. The photograph was of two of the bombers — Shehzad Tanweer and Mohammad Sidique Khan — and was shot by an undercover agent at a motorway service station. For some reason, MI5 decided to desaturate the photo, crop Khan (the ringleader) out, and make Tanweer look hardly human with blurry facial features and a blob-like profile.

Amateur Photographer points out that software couldn’t have been the reason for botched crop-job, since consumer-level image editing was already quite good by 2004 (Adobe Photoshop Elements 2.0 was released in 2002 and cost only $100).

During the inquest Hugo Keith QC responded to a senior intelligence official by saying,

If you will forgive me, one of my children could have made a better job of cropping this photograph.

This might be the costliest “crop failure” ever — one that cost 56 lives.

7/7 inquest photo crop blunder: How hard can it be? (via The Guardian)

This Camera Van Has Rolling Shutters

Creative Portraits of a Cat on the Ground