The journalism industry is going through particularly tough times, with revenue from ads and subscriptions declining considerably.

However, during the harshest economic climates, innovative ideas flourish more than ever, and news outlets are tapping into the power of convergence: mixing forms of communication to create multimedia packages that deliver stories that are accessible by the “Web 2.0” generation.

Fortunately for photographers, visuals are an integral part of the multimedia wave.

Hopefully, you’ve had a chance to check out our August post on some of the best newspaper photo blogs out there, as well as some of the multimedia features on most newspaper sites, like the New York Times, SF Gate, the San Jose Mercury News, and some college newspapers, including my alma mater, the Daily Bruin.

Many sites feature audio slideshows, which are one of the simplest and easiest forms of multimedia storytelling–if you’ve got the right tools and elements:

1. Photos that tell a story. Whether you’re photographing a family holiday, sporting event, or documentary news, try to shoot a variety of images from different angles of different moments. Take close-up and wide photographs.

After the shoot, pick photos that have a narrative or chronological order of events and happenings.

2. A recorder and quality audio that matches the story. Use a digital recorder that can transfer sound files onto your computer. I usually use a MicroMemo attached to my iPod video (ancient, I know). I’ve also had some hands-on time with the Olympus DS series, which capture very crisp audio. The higher end model, the DS-61 has different modes to capture directional sound, which is very useful when recording specific types of sounds such as ambient noise versus a single person speaking.

Audacity is a free audio editing program that can be used to cut, edit, splice, and record audio–all very straightforward.

You can also use programs like Adobe Audition for more in-depth editing.

Several publications use Final Cut Pro to put together an audio slideshow. iMovie also can do the job.

For fast production and ready web publishing, try Soundslides. A free demo is available on the site.

Soundslides is a very intuitive program for uploading photos and audio, and adjusting timing points and transitions. It also has a feature for exporting to web if you have an FTP set up.

Share your project on your website. If you don’t have one, check out Weebly.com to make a free customizable site.

Check out some of the links above and explore a bit for ideas.

One of my favorite examples of the simple, yet powerful integration of photography with another medium is the package by New York Times, One in 8 Million. 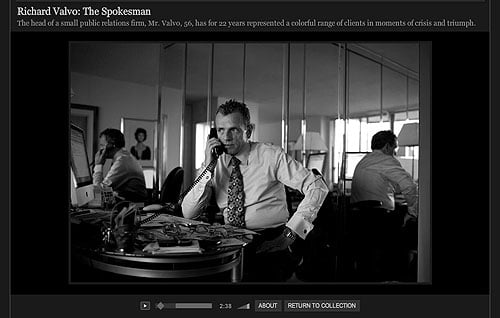 The project tells one story each week, focusing on one central character, someone you might brush shoulders with on the subway of New York. The subject describes, in his or her own words, anything from their own personal struggles, triumphs, daily life or something that defines them. The images work to visually capture the story with a timeless quality, in black and white.

Together, the two mediums form a very intimate local human-interest story that fosters a sense of community–which is quite an impressive undertaking considering the expansiveness of New York City.

If you’ve got a favorite multimedia site or an audio slideshow to show off, share a link!

Adding a Subtle Vignette with Photoshop